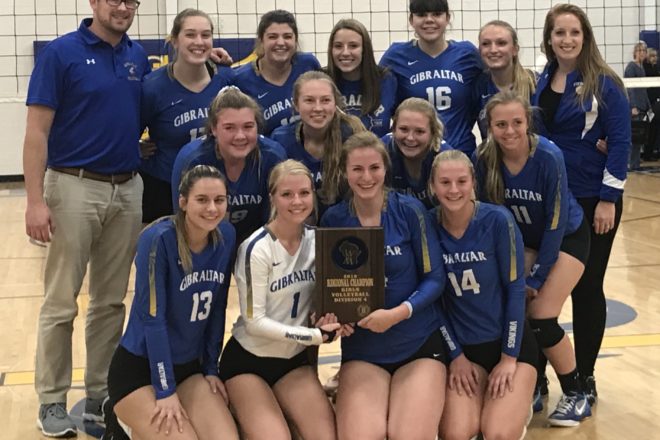 It is only the second regional volleyball title in the school’s history, and first since 2010, according to head coach Woody Heidler.

Gibraltar will return to Waupun to play Hilbert in sectionals Thursday at Central Wisconsin Christian.

The Sturgeon Bay Clippers continued their boys soccer dominance with a 6 – 2 clubbing of Lourdes Academy/ Valley Christian Saturday. The Clippers advance to sectionals Thursday, where they will play top-seeded Kohler, who beat them in the state final in 2017.

Stenzel, Henry Advance to State on the Trail

Sevastopol’s Olivia Stenzel and Gibraltar’s Evan Henry are heading to state in cross country. Stenzel finished 10 seconds faster than any other competitor in Saturday’s meet at Manitowac Lutheran.

Henry finished third on the men’s side. Both will run in the WIAA state meet at Ridges Golf Course in Wisconsin Rapids on Saturday.

Southern Door topped Peshtigo 55 – 15 in the first round of the WIAA football playoffs Friday, Oct. 19. The Eagles were led by star running back Derik LeCaptain, who ran for over 200 yards and scored 5 touchdowns in the rout.

Sevastopol topped Oakfield 48 – 0 in the first round of 8-man football playoffs.