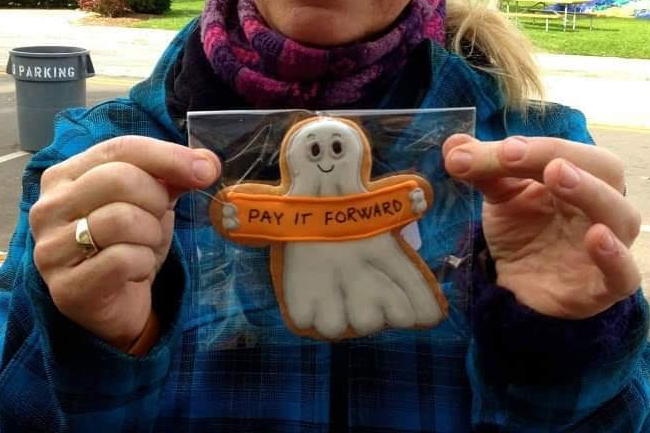 A Sister Bay family is carrying on the pay-it-forward spirit of Bo Johnson, a 12-year-old Sister Bay native who valiantly fought a rare and aggressive form of leukemia but lost his battle on September 28, 2012. Those who knew Bo admired his kind-heartedness and courageous personality, and his illness didn’t change those traits. While Bo was going through his treatment, he received the support of the entire community and wanted to find a way to thank everyone by doing something to pay their kindness forward. Local kids began a fundraising effort that ultimately became the Go Bo! Foundation.

“Bo bought a computer to keep in touch with his classmates while he was in the hospital, and he put the rest of the money into a little foundation called the Go Bo! Foundation to help other kids with cancer or life-threatening illnesses here in Door County, similar to Door CANcer,” said his mother, Annika Johnson. “This was his plan to pay back the community. When he found out he was terminal, he asked me to make sure that this little foundation still existed to fulfill his pay-it-forward wish. He also believed that all of us should pay it forward to each other, no matter how big or small.”

At the 2012 Fall Festival in Sister Bay, the first Go Bo! Foundation Bake Sale was organized after a cookie artist shared Bo’s story on Facebook and asked for cookie donations from other bakers. The response was immediate and amazing, with 64 cookie artists from 24 states and three countries donating 1,119 cookies and helping to raise more than $5,000 during the inaugural sale.

The organizers couldn’t have anticipated that by the eighth annual sale, they would be breaking $200,000 in total funds raised. The official eighth annual Go Bo! Foundation Bake Sale began last weekend in Sister Bay, and it will run for three days this weekend, Oct. 18-20, during the village’s annual Fall Fest.

For the 2019 sale, cookies have come from 47 states and seven countries, for a total of 8,200-plus cookies. The beautifully designed cookies are part art and part dessert, highlighting the skill and creativity of the many bakers who have donated them.

Among the thousands of cookies, you’ll see a huge array of themes, from fall and Halloween designs, to Wisconsin-themed cookies, to goats, dogs and other animals. Cookies are sold in boxes, from small to big, or singly. The BRP Box Shop in Iowa generously donated the boxes. Cupcakes from FlourGirl Patissier are also for sale in pairs or sets of four.

Last year, the sale raised more than $34,000. This year, it’s on track to beat that number, bringing the total of funds raised to exceed the $200,000 mark. These funds go toward cutting-edge research for cancer and related blood disorders, supporting state-of-the-art treatment in a child-friendly environment, and assisting families during times of financial need.

Purchase cookies all weekend, 9 am – 5 pm each day, in a tent set up near the entrance to Al Johnson’s Swedish Restaurant in downtown Sister Bay.