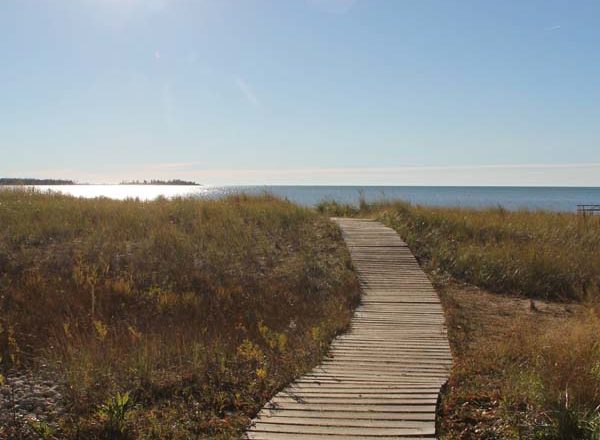 We are now in the thick of hunting season: The popular gun deer hunting season runs Nov. 21-29, but varieties of small-game hunting take place well into the winter months. This means that many hiking areas with public access will be hunting grounds for the next few months, so when you’re visiting them, it’s smart to understand what steps you can take to help ensure the safety of both you and your canine companions.

First, know that hunting incidents are very rare. Last year, there were only four incidents statewide during the nine-day hunt, when an estimated 600,000 hunters were actively hunting. (And two of those incidents were self-inflicted.)

Outdoors writer Kevin Naze said, “In my four decades of covering the outdoors here, I don’t even need one hand to count the number of shooting incidents in Door and Kewaunee counties. Most were stray bullets hitting outbuildings. [This is] remarkable, considering there are likely upwards of 15,000 hunters – an estimate, based roughly on the total number of deer taken and the average success statewide – here.”

Even knowing that the level of risk is low, Naze still strongly recommends always wearing high-visibility clothing during this time of year, such as blaze orange or high-vis yellow and green.

“Being safe means being seen,” he said. “Hikers and other nonhunters who choose to be afield – both on public and private property – during any gun hunting season should wear as much bright clothing as possible – at minimum, on the head and chest. Even if there’s no hunting allowed, rifle bullets can travel long distances – a half-mile or more – and hunters focusing on a deer in an open field may not see someone hundreds of yards away in the distance unless they have bright colors on.”

Another tip Naze shares is that a large amount of hunting is done during the dawn and dusk hours: the first and last two to four hours of sunlight each day. Thus, hiking midday is likely to be the least busy and thus the most safe period as far as hunting goes.

I also asked staff at the Door County Parks and Facilities Department about hunting in county parks and was told that hunters do need to register and receive a special permit to hunt in the parks.

“If there are hunters registered and permitted in a park,” said Door County Parks Manager Burke Pinney, “an orange flier will be in the kiosk at these parks notifying patrons that hunters are also present in that park during a given hunting season.” Outside of the legal hunting seasons, Nov.15 – Apr. 1, no hunting is allowed.

If you prefer to get outside in areas where there’s no hunting, review the list below, which details the county parks that do not allow hunting of any kind. UPDATE: Ridges Sanctuary has closed the majority of trails during the 9-day gun hunt from Nov. 21-29. They have one trail open: Hidden Brook Boardwalk, and blaze orange is required.

There are areas within the state parks that are off limits to hunting. At Potawatomi, Peninsula and Whitefish Dunes, you can find hunting-free areas that offer hiking. Check for these designated areas on the seasonal map for each park at dnr.wi.gov.

The Door County Land Trust properties allow hunting for the most part, but some sections of some preserves are hunt-free. The land trust’s website has a helpful chart that details each hunt season and which preserves are available for hunting at doorcountylandtrust.org/how-we-save-land/hunting-program.

County Parks That Do Not Allow Hunting

Door Bluff Headlands UPDATE: only a portion of the park is non-hunting; the northern 122 acres allow hunting with a permit.