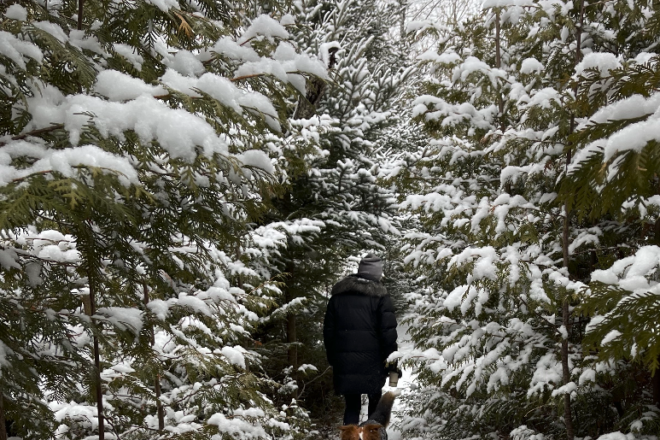 Tucked off Moravia Street in Ephraim sits the Door County Land Trust’s Ephraim Preserve at Anderson Pond, a 26-acre preserve with a spring-fed pond as its centerpiece.

The land here once served as pasture, orchard and farmland, but in the hands of Aslag Anderson and his descendants, much of the land was undisturbed on the edge of the village for 150 years before the family sold it to the land trust in the spring of 2005.

Though the spring-fed Anderson Pond is the preserve’s centerpiece, it also features a diverse blend of wildlife habitat, including forest, a meadow, and portions of the Niagara Escarpment. The preserve is a prime example of how a trail system can take on an entirely different identity in winter than in summer.

The land acts as a basin that collects water each year after the snow melts. The melts fill the pond to varying levels, then slowly drain to the bay of Green Bay through the bedrock, providing important wetland habitat for migrating and nesting birds.

In the spring and summer, the trail can be muddy and slick, but in the winter, the pond freezes over. If you find the trail after a snowfall, you’ll hike through cedars struggling to hold the snow on their branches and admire a beautiful army of towering trees as you hike deeper inland.

The Bob and Nancy Davis Trail System – named for Bob Davis, who was the driving force behind the effort to create the preserve – guides you in a loop, with a short and long option.

If you go: You’ll have to pay close attention to find the entrance between sections of split-rail fence along the edge of the road. From there, you’ll follow the trail down a slope to a small opening where there’s a kiosk and trail map.

Difficulty: Moderate, but in some winter conditions, it can be difficult. There are hills at the entrance and exit, and the snow-covered trails can be slick. You may want to take a walking stick, and definitely wear shoes with a good grip.

Highlights: The trail begins atop a cobblestone beach ridge at Moravia Street, descends into juniper fields and forest, and circles the namesake pond, which was once used for winter skating. See remnants of the Anderson farmstead and orchard, and admire the Niagara Escarpment on the back side of the preserve.