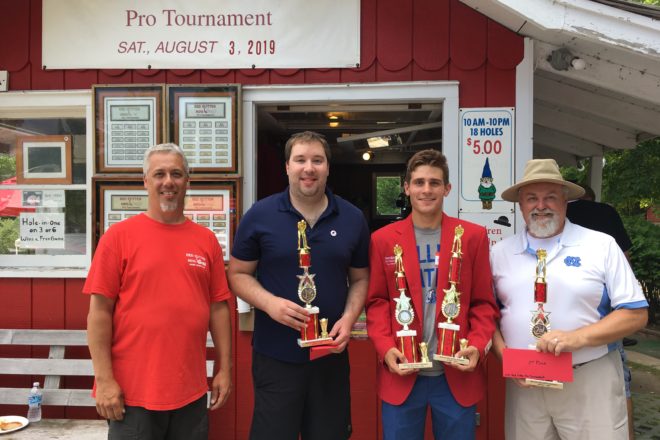 The 18th annual Red Putter Pro Tournament was held at the Red Putter mini-golf course in Ephraim on Aug. 3, when 58 players competed for the first-place trophy, $2,000 cash prize and red jacket. Matthew Kraus left wearing the jacket and carrying two trophies: He took first place with a three-round total score of 106 and tied Eric Kraft for the best single game of 33.

An intense, three-hole playoff took place, with Kraus taking the trophy and $100 cash prize after a hole-in-one on hole #3. Kraft did not leave empty-handed, however: He placed third with a score of 113. John Powell took home the second-place trophy and $500 for his score of 108.

Next year’s tournament will be held Aug. 1, 2020. Players can qualify now by shooting under par on the course. Several have already qualified and have their names on the Red Putter Pro Board.