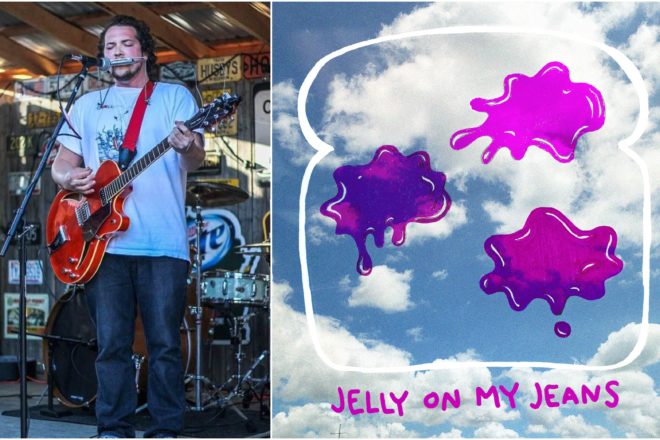 (Left) Make Keene performing at The Garage Bar at Husby’s in Sister Bay in 2019. Photo by Collin Massad. (Right) Cover art by Lucy Hodkiewicz, owner of The Lightbox in Ephraim.

Back at Gibraltar High School, Make Keene was always known as the guy who would never have his shirt on, often rocking out with the Gibraltar pep band on his heavily stickered Fender bass guitar. Since then, Keene has begun to manifest a similar raw confidence by “making” quite a name for himself in the local original-music scene.

The first thing people usually ask Make about is his first name.

“I was named after my great-great-grandfather Make Mills,” Keene said. “He came to the United States in the 1890s as a young man, and when he arrived at Ellis Island, he had to change his name. He was reading a book by an author with the last name Mills and asked the immigration officers to ‘make it Mills.’ So they named him Make Mills.”

He said that having such a name gave him a sense of ingenuity, but a lot of it came from growing up around his grandparents.

“I knew I wanted to be an artist, and they encouraged that,” he said. “I knew I was different from the other kids. My hair was long; my name was funny; and Elvis was my hero.”

Keene has recently released a new single titled “Jelly on My Jeans,” which comes nearly a year after he released his debut EP, Haymaker.

He said he wrote the song after reaching out to his social-media followers for songwriting ideas during his coronavirus quarantine. The original prompt for the track was “a nice picnic.”

“I had previously taken an afternoon nap with a PB&J and woke up with jelly very much on my Jeans so I ran with that,” Keene said. “Something told me I could jam the two ideas together.”

Amid the pandemic, Keene said that he needed to write music that was idealistic to lift his spirits.

“I wanted these songs to give me an excuse to lighten up and make some fun, upbeat music,” he said.

The song was written and recorded in Keene’s apartment on the south side of Minneapolis, where he lives now.

“We have a little sunroom that I commandeered into a music room,” he said.

Keene talked about how much “Jelly on My Jeans” contrasts with his debut release, Haymaker.

“I honestly cannot think of anything it has in common with Haymaker,” he said. “Haymaker was dark and moody because I wrote those songs while healing from some rough times. ‘Jelly on My Jeans’ comes from such a different, much happier place.”

Keene’s good friend David Smrz – a lifelong Door County resident whose passion is all things audio – mixed and mastered the track. Smrz comes from a very musical family. His brother, Dan, is a professional drummer with several bands around the county.

“It was the first time I collaborated remotely like that,” Smrz said. “Technology keeps advancing, making collaborations much more efficient. He sent me his vocals and guitar tracks; I crafted the rhythm from samples and drew them together, piece by piece.”

“It was great to be able to collaborate even though we were both stuck at home and 300 miles apart,” Keene said.

Keene was hesitant to publicize the release of his single amid the racial protests happening right outside his apartment and across the country, yet he realized that it’s crucial for artists to continue to create and share their work.

“We artists have to be mindful of our presence on social media and use our voices not just to share our work but to lift up the voices of the marginalized,” he said. “That’s what Aretha Franklin, Kendrick Lamar, Bob Dylan and so many others have done in times like these. ‘Jelly on My Jeans’ may not be a political song, but that doesn’t mean I’m choosing to ignore what is going on.”

Keene said that when people listen to the song, he wants them to “feel like they’re in a park looking up at the sky and seeing the clouds of jelly that you see on the cover art.”

“It seems we all could use a jolly picnic in the park and have that one day where we can deflate our stress and not let it get us down, no matter how much jelly gets on our jeans,” David Smrz said.

“Jelly on My Jeans” is available now on all streaming platforms. Keene said there were many more responses to his request for songwriting prompts, and there is more music to come soon. As soon as it’s safe, he also plans to do some live shows in Door County with his band, Make and the Makeouts.