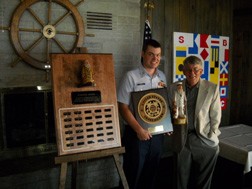 Two iconic maritime figures and a Coast Guardsman were honored at the annual Mariner Award Dinner on July 28.

Posthumous honors went to C. Ray Christianson, who had a shipbuilding career that spanned over 50 years and was one of the “founding fathers” of the Door County Maritime Museum.