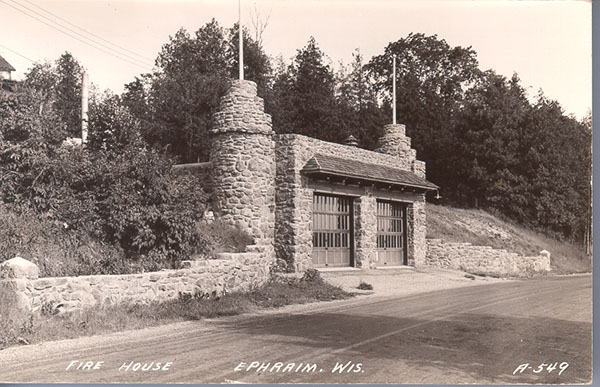 A 1935 Ephraim Fire House postcard features the front of the Fire House Museum. Photo courtesy of the Ephraim Historical Foundation.

Tucked into the cliffs of the Village of Ephraim, and across the street from the shimmering waters of Green Bay, the Ephraim Fire House Museum stands as a memorial to the firefighters who have risked their lives over the years.

It also serves as a tribute to one firefighter in particular: Bill Weborg. He was an assistant chief of the Ephraim Volunteer Fire Department who died of a heart attack while responding to a boat fire in 2004, and the museum is dedicated to him.

Niles Weborg, Bill’s father, was a member of the Ephraim Volunteer Fire Department for most of his adult life and served as its chief from 1981 until his retirement in 2015. He takes great pride in relating the history of the fire department, which formed in 1930 as a bucket brigade; the building that now houses the museum; and, understandably, the impetus for establishing the museum.

“There was a need for fire protection because of the big buildings,” Weborg said, “and the fire chief, Al Paschke, was a dynamite specialist.”

Those two facts may not seem to be connected unless one imagines what the topography of the land was back in the early 1930s. According to Weborg, Paschke told the village board that the cliff where the fire house would eventually stand was a “useless piece of property.” Paschke proposed putting some dynamite charges into the cliff and building the station in the void that would result from the detonation. The board approved Paschke’s plan, and it went forward.

Architect William Bernhard, a contemporary of Frank Lloyd Wright, designed a stone building using, in part, rocks salvaged from the original demolition. The station was erected with the help of Works Progress Administration (WPA) workers, and it — as well as a 1934 fire truck —  were purchased for a little more than $7,000. “Including the dynamite,” Weborg added.

A 15,000-gallon cistern was built right into the cliff at the back of the building. When the fire house became a museum  around 2008, the cistern was filled and walled in, with only a red plug reminding visitors of the cistern pipe that used to connect water hoses to the tank wagon.

In 1990, the Ephraim Fire Department erected a new station, and the former fire house was used for storage until Weborg spearheaded the museum project.

“I knew I wanted to do something with this station,” he said. The death of his son in 2004 “pushed me over the cliff to do something. The museum started about four years after he passed away.” Weborg, along with several other people, raised $250,000 to establish the museum that’s dedicated to his son.

The Ephraim Fire House Museum features firefighting memorabilia that Weborg has collected through the years, plus many items donated by firefighters from around the world. It also houses the Ephraim Volunteer Fire Department’s first 1934 Ford pumper.

“It was built by the Peter Pirsch Company in Kenosha, Wisconsin, and at that time, it was the first licensed piece of firefighting apparatus north of Sturgeon Bay,” Weborg said. “It had only 100 gallons of water on it, but that was just to prime the pump. We have Green Bay right here. [The pumper] still runs … It was just recently in the parades in Baileys Harbor and Egg Harbor.”

Another museum attraction is a 1927 American LaFrance pumper from New Mexico, which was donated to the museum; and a half-scale model of a 1932 fire truck. The trucks join many other donated pieces of firefighting equipment with both local and international origins, including a red bucket and white helmet from England.

The Ephraim Fire House Museum is open most evenings and weekends during the tourist season. It is staffed completely by volunteers, and in particular, Scotty Weborg — another son of Niles and brother of Bill.

A place that holds such a special place in Ephraim’s history also needs a very special person to keep its history alive, and that person is Scotty. He’s known all over Door County for his volunteerism, which was honored with the 2015 Lifetime of Service Award from Volunteer Door County.

“He’s all over,” Niles Weborg said. “Wherever there’s something doing, he’s there. You don’t have to tell him. Somehow he smells it out. The village loves him, and everyone who meets him can’t say enough about him.”

After working for five hours a day at the Good Samaritan–Scandia Village nursing home in Sister Bay — washing dishes and doing just about anything asked of him, including charming residents — Scotty walks the two miles from his home to the Ephraim Fire House Museum and spends time there with visitors, proudly showing off the museum that’s dedicated to his late brother.

Scotty’s charm stretches well beyond his job at Scandia Village. Last year, T-shirt sales at the museum reached $16,000, with $7,000 more earned in donations, thanks in part to Scotty’s dedication. Some of that money is used for safety equipment that’s needed in the community.

“My son was the first firefighter to go down in the line of duty in Door County,” Niles said, “and I was glad the village set forth and said, ‘Here, make this a museum in his memory.’ And, of course, that’s what Scott tells the people who come here. He and his brother were very close.”