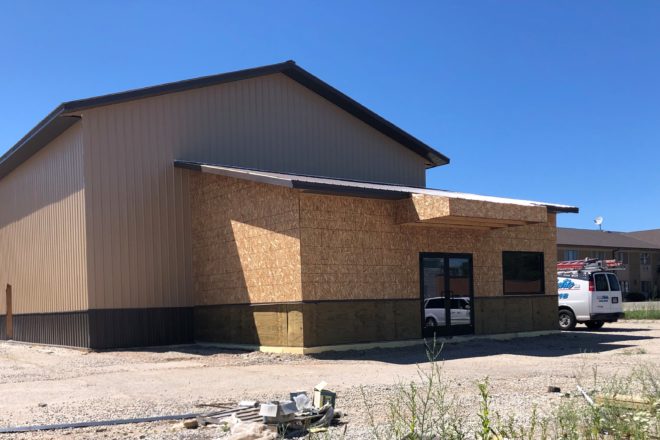 The DC Arts Center as of June 2022. Photo courtesy of Rogue Theater.

Rogue Theater builds a home of its own

That space, dubbed the DC Arts Center, is now under construction at 917 N. 14th Ave. in Sturgeon Bay, across the street from the Aging and Disability Resource Center. When it’s finished, Rogue co-founder Stuart Champeau said the space will host performances by dance troupes, musicians and other theater companies, in addition to Rogue shows.

Construction began on the DC Arts Center last December, but the process has taken longer than expected. That’s because Champeau and Lola DeVillers, his wife and co-founder, wanted to use all local subcontractors, who tend to be very busy.

“We waited a few months for an electrician to get there; we waited a month for a plumber to get there; we had to go through some state permitting with the aesthetics committee for two months,” Champeau said. “It’s kind of like everything that happens seems to take a month or two.”

Rising material costs have been an issue as well. Though Rogue’s initial fundraising goal was $150,000, the estimated project cost is now $200,000, courtesy of supply-chain issues and inflation. That figure includes the building, as well as everything inside: lights, seating, curtains, dressing rooms and more.

The issues make it difficult to put a completion date on the construction project, Champeau said.

In addition to directing for Rogue, he works for Cleary Building Corporation, the company that’s constructing the building. Champeau worked on the building designs himself, which allowed him to modify them to suit the theater troupe’s needs – adding high ceilings to allow for flyway sets, for example.

After being established as a traveling theater troupe in 2013, Rogue has used a series of spaces as they became available. It made its first home in November of 2013 at the Depot Performing Arts Center on 341 N. 3rd Ave. in Sturgeon Bay and performed there until 2016, when the building was sold to Fincantieri Bay Shipbuilding.

That summer, Rogue rented rehearsal space from JC’s Clubhouse at 340 Jaycee Court in Sturgeon Bay, but that building was sold to PATH of Door County in 2018.

So Rogue became a traveling troupe again, renting performance space at Sturgeon Bay’s Prince of Peace Lutheran Church and Door County Fire Company, as well as at the town halls in Fish Creek, Ephraim and Baileys Harbor. Rehearsals were held in the basement and garage of DeVillers and Champeau’s home.

By 2020, Rogue had prioritized finding a permanent home in Sturgeon Bay, ultimately deciding to start from scratch by building a theater on land they already owned.

Rogue’s shifting series of rehearsal spaces forced the theater company to choose scripts with simple sets, costumes and props, but once the new building is finished, Champeau is looking forward to having more freedom in deciding which plays to produce. After such a lengthy construction process, however, he said seeing the building come together produces more relief than excitement.

“It’ll be exciting, and it’ll be wonderful when we open up,” Champeau said. “Right now, it’s just been nerve-wracking and kind of a grind.”

To donate to the construction project, visit roguetheater.org.