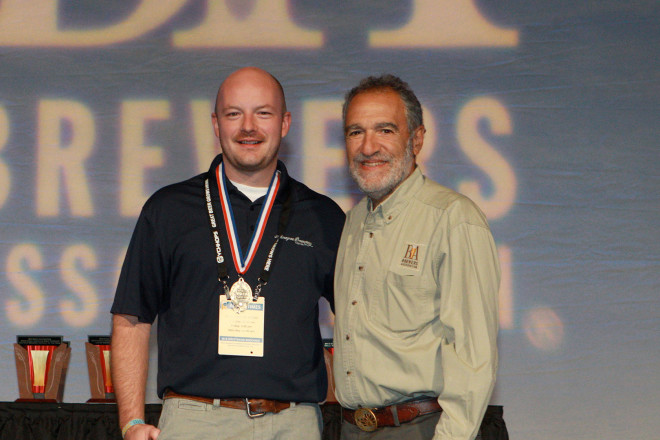 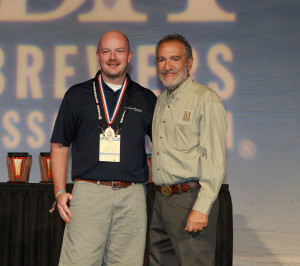 Ahnapee Brewery was first put on the map in 1868 when sales of “the foaming beverage” were in high demand by Civil War veterans.

The newly revived brewery was put on the map last weekend for a second time on a national level by the Great American Beer Festival (GABF), where only 274 medals were awarded to more than 6,600 beer entries. Ahnapee’s Munich Helles, named Long Goodbye, was awarded a Silver Medal, and rated above 53 other breweries in its category.

Head Brewer Nick Calaway says, “It’s great to get a bit of validity for our young brewery in a light (colored) beer category. Lighter beers show all the flaws a brewer may or may not have made; there is no hiding them. I feel the GABF awards represent the highest standard in the craft beer world.” Long Goodbye is well described as “a Munich Helles that is light in body, color, and hops. Subtle grainy sweet flavor with a smooth, lingering finish.”

The next batch of Long Goodbye will be introduced this fall in the brewery’s two stall garage-turned tap room Wednesdays through Sundays at 105 Navarino St., Algoma, just two blocks from Lake Michigan on the Ahnapee River, next to von Stiehl Winery. For more news and to see the entire list of offerings, visit AhnapeeBrewery.com, or call 920.785.0822.

The Wisconsin Department of Natural Resources and the U.S. Coast Guard are continuing their joint investigation into the Labor Day weekend incident where a number of recreational boats off Chambers Island were damaged and one person was injured by the wake from a military vessel undergoing sea trials in Lake Michigan.

DNR Conservation Warden Chris Groth said it was simply the sheer volume of boats involved that has prolonged the investigation. In the meantime, the future USS Milwaukee (Littoral Combat Ship 5) successfully concluded its acceptance trial Sept. 18, after completing a series of in-port and underway demonstrations for the Navy’s Board of Inspection and Survey. The acceptance trial is the last significant milestone before delivery of the ship to the Navy, which is planned for October. During the five-day trial, the Navy conducted comprehensive tests of the installed systems. “What a ride,” said LCS program manager Capt. Tom Anderson. “The weather on Lake Michigan during the conduct of this trial was not pleasant. Despite the high sea state, Milwaukee crisply executed the schedule of events and received some of the highest demonstration scores to date for the LCS class. Milwaukee lives up to her namesake city in both her tenacity and strength.” Following her commissioning in Milwaukee in November the ship will prepare for full ship shock trials to be held in the Atlantic Ocean in 2016. She will then sail to California to be homeported in San Diego with sister ships USS Freedom (LCS 1), USS Independence (LCS 2), USS Fort Worth (LCS 3) and USS Coronado (LCS 4).

An official looking memo from the Wisconsin Department of Natural Resources is making the rounds on social media asking citizens to remove concrete deer from their property so they won’t be accidentally counted in an upcoming statewide deer count.

This is a hoax. This did not come from DNR. One way to spot this hoax is in the signature on the fake memo. The name used is misspelled and even if spelled correctly, that person is not the DNR Secretary as suggested.

The Door Peninsula Astronomical Society, which was founded by the late Ray Stonecipher, is planning an informal gathering on what would have been Ray’s 88th birthday, Oct. 10, from 1 to 4 pm, at the Ray and Ruthie Stonecipher Astronomy Center.

The Astronomy Center is located at 2200 Utah St., Sturgeon Bay. Turn left at the top of the hill, through the gate onto Skygazer Trail. There is ample parking available. Snacks and beverages will be served. The purpose is simply to gather those of his friends who would enjoy the opportunity to celebrate his life, his gifts and his involvement in so many lives, so many activities, and so much learning. Ray Stonecipher died of cancer on Aug. 27, 2015.