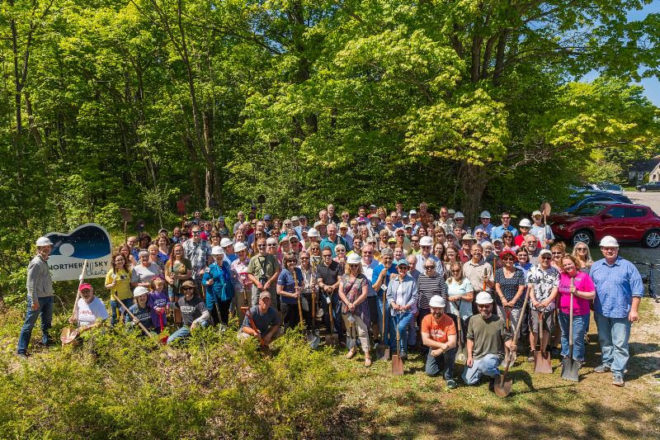 More than 120 people gathered to celebrate the groundbreaking on May 27. Submitted.

On May 27, Northern Sky’s company members, capital campaign donors and board of directors gathered to officially break ground on the company’s new campus on the corner of A and F in Fish Creek.

In 2017, Northern Sky embarked on the public phase of its Constellation Campaign with the hope of breaking ground on its new property in the spring of 2018.

“The response has been tremendous. We hit all of our benchmark goals over the winter, allowing us to begin work this spring on the production and storage facility that will be part of the two-building campus,” said Dave Maier, managing director.

The second building, the creative center, will house administrative offices and a 250-seat theater. The company plans to open the theater with a premiere show for the 2019 fall season.

“The success of the campaign is highly encouraging, of course, but we have not crossed the finish line yet,” said Holly Feldman, director of development and public relations. “We still need to raise a significant amount of money to complete everything we are determined to accomplish, including much-needed upgrades at our home in Peninsula State Park.”

While the creative campus will allow the company to consolidate many of its operations under one roof and provide for a year-round presence, the company plans to continue to perform its summer season in Peninsula State Park. Naming opportunities remain at both the new campus and at the amphitheater in Peninsula State Park. For more information visit constellationcampaign.northernskytheater.com.