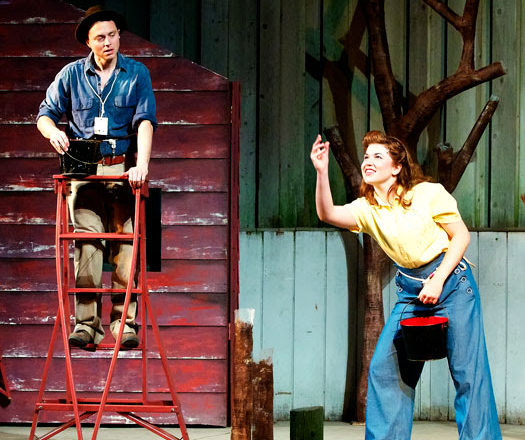 The world premiere of Oklahoma in Wisconsin will take place this summer. Richard Castle and Matthew Levine have written a musical described as a charming “doo-woppin,’ fish-boilin’ good-time” homage to Door County that highlights the quirkiness of a family-run inn in the 1950s.

Matt Zembrowski’s Doctor! Doctor! will return to the stage. In the musical, a retiring small town physician recruits his young big city nephew to take over his practice.

Fulfilling constant fan requests, Victory Farm, by Emilie Coulson, Katie Dahl and James Valcq, will return for its third run with Northern Sky. Set during WWII, Victory Farm is a story with roots deep in the soil of a Door County cherry orchard.

“Last year, our world premiere, Doctor! Doctor!, was set in 1938. Our world premiere this year, Oklahoma in Wisconsin, is set in the 1950s. So bringing back Victory Farm, set in 1944, fills in the decades nicely,” said Artistic Director Jeffrey Herbst. “All of these shows are set in Door County, providing a glimpse into the way things were and illuminating how much of that character is still part of what makes Door County so alluring.”

Lumberjacks in Love, by Fred Alley and James Kaplan, also returns to the woods for a one-night a week special.

Casting will be announced this spring.

The fall season features the world premiere of Naked Radio, written by veteran Northern Sky collaborators Dave Hudson and Paul Libman. It will be performed at Door Community Auditorium from Sept. 1 to Oct. 21.

The summer season runs from June 14 to Aug. 26 at the Peninsula State Park Amphitheater in Fish Creek. Tickets are $22 for adults, $11 for students, and $6 for children 12 and under. Reserved seats are $7 more per ticket.

Tickets will go on sale April 1. For tickets, call 920.854.6117, visit NorthernSkyTheater.com, or stop by the Northern Sky box office at the Green Gables shops in north Ephraim.