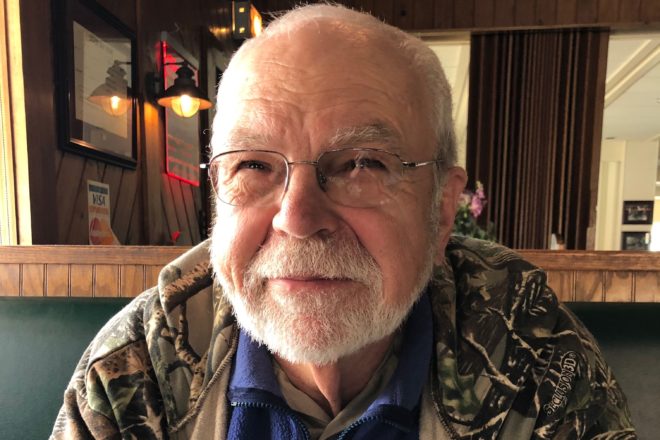 Before the Gibraltar school building was built, one- and two-room schoolhouses were scattered across Northern Door. It was in one of these schools that Walter Kalms, Town of Liberty Grove administrator, started his education.

Wildwood School was a two-room schoolhouse located on the property where the Liberty Grove Town Hall would one day sit – a place where Kalms has worked for the past 36 years.

“I was thinking about it the other day. I’ve been working there [town hall] for 36 years, and I spent first through eighth grades there. So that’s 44 years of my life spent on that property.”

The two-room school was an enjoyable experience for Kalms, although he admits he preferred to spend time helping out on his grandfather’s farm, which he sometimes skipped school to do.

Kalms transitioned from the two-room schoolhouse to the relatively new Gibraltar High School in Fish Creek, where he participated in Honor Society, Library Club and FFA (and was a state officer to boot).

With the completion of high school in 1965, Kalms had to make the hard decision all seniors make: what next? Considering his advice for current seniors, his journey after high school makes sense.

“Don’t worry too much about what you are gonna do in the future,”  he advised. “Just try to figure it out as you go.”

And he did just that.

Kalms attended UW-River Falls and studied agriculture – though for what purpose, he wasn’t sure. He did attempt a career in agriculture by interviewing with a hog-processing plant. It didn’t go very well because he wasn’t sure what he would be doing, and he didn’t get the job.

Over the next few years, Kalms traveled around Wisconsin and the country working as a state park ranger, insurance salesperson, soda-truck loader, Northern Propane tank painter and more.

Eventually, he made his way back to school and studied a subject he had always found interesting: accounting. After he finished school, he ended up in Oshkosh working as a bus driver before he came back home.

Making the decision to return to the county isn’t always an easy one, especially if you’re unsure of your career path. But Kalms took his own advice and headed home to settle down. Although he encourages the youth of Door County to come back to the county, he does admit that it can be challenging at first.

Kalms worked a few jobs to make ends meet, including wholesale delivery for Krist’s and working on his brother’s farm during the summer. The one that stuck, though, was driving a school bus for his alma mater, Gibraltar High School. Kalms spent 17 years driving a bus for the school he used to attend, and eventually he became the head driver.

Reminiscing on his time as a driver, Kalms recounted one of his more treasured memories. During a weekend trip with the swim team, he and the team stopped at Dairy Queen for a treat. Kalms noticed one girl at the back of the bus. When he asked why she wasn’t getting off to buy herself a treat, she opened her hand to show him a dime: all the money she had, and not enough to purchase a treat.

“I would have bought her the whole store,” he finished. The girl got her ice cream.

Near the end of his career as a bus driver, Kalms’ sister encouraged him to run for the town board. Two students on his bus route were delighted at this news and volunteered to help him make campaign posters – for a small fee, of course. With the students’ help, his campaign was a success.

Kalms assumed his new position, and in April 1983, he started his new job as clerk for the Town of Liberty Grove. The job evolved from clerk to clerk/administrator to just administrator when Janet Johnson filled the newly created clerk/treasurer job in 1999.

Looking back on his long career, it’s hard to point to one event or thing that he’s most proud of, but he is proud of the growth of the town he works for.

“I’m proud of the buildings, equipment and property that we’ve got because it has all been basically acquired in the last 36 years – the trucks, the town hall. When I walk through the town shop, I look at this piece of equipment or truck, and say, ‘I helped get this and helped get that.’ It’s kind of a neat feeling.”

Kalms has become a familiar face in Liberty Grove, but he can imagine retiring in a few years. Until then, you can see him out and about, working on town business, and trying hard to improve the town during the remainder of his time.