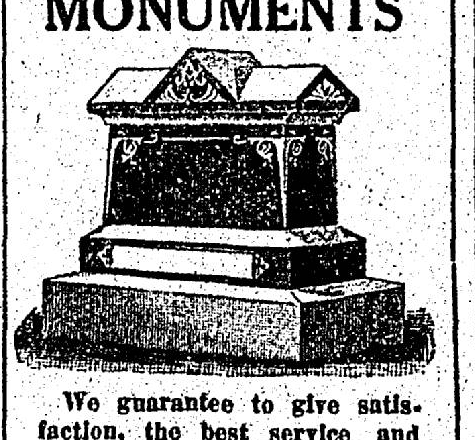 After eight o’clock at night avaricious boys hunt the streets and alleys for stray cows with which to stock the pound.

A grand agricultural dance will take place at the opera hall this (Friday) evening in honor of the county fair. Invite your country cousin or some other nice girl and “swing your partner” to the music of Frank Leque’s string band.

Jos. Lingg had a double runaway Thursday morning. His team first ran away from the planing mill, and did some damage to the wagon. The wagon was repaired and the team again hitched thereto, but it was no sooner done than they ran away again. Mr. L. was more or less (probably more) under the influence of liquor at the time, which doubtless accounts for the accident..

City Clerk Leonhardt and City Engineer Greaves commenced putting up the new street signs on Monday. The lettering is white on a blue background and very plain and neat. Mr. Greaves is giving out the numbers for the business houses and residences and all property owners must purchase the figures and put them up on the buildings within thirty days from the time they are notified. The figures can be purchased at any of the hardware stores at a small cost.

LOOKING FOR A SITE

ble Locations In This City.

There is a possibility of this city securing the location of a large tire and rubber manufacturing concern within its borders in the not very distant future if the efforts of the citizens availeth anything.

During the past week H. C. Scofield, chairman of the Commercial Club received a communication from the Racine Tire and Rubber Co. concerning the possibility of securing a location for their plant within the borders of this city.

According to the information received the Racine Rubber and Tire company is one of the large industries of the Belle city. It employs between 400 and 500 men and women the entire year and would be a valuable acquisition to the business interests of this community.

Leahem Smith was selected to represent the club and will make a visit to Racine the coming week for the purpose of obtaining particulars relative to the size of the site required and such other information and particulars concerning any proposition that may have to make.

The fish tug, Lila C., completed but two weeks ago at the Johnson Boat Works, in this city, sank in a collision with the Steamer S. B. Coolidge of the Hutchinson line about for miles southeast of Pilot Island in Death’s Door, Wednesday morning at nine o’clock.

Leslie Cornell, owner of the boat and Alfred Johnson, both of Washington Island, the only two on the tug, plunged overboard and were rescued by members of the Coolidge, who lowered a life boat and went to their rescue.

The steamer struck the port side of the boat demolishing the port quarters. It is stated that about four feet was taken from the bow. The boat, it is claimed, sank in less than ten minutes.

The water at the place where the boat sank is about 150 feet deep. The Plum Island cost guards worked Wednesday afternoon in an attempt to locate the craft but were unsuccessful.

The boat was completed two weeks ago and had been used for fishing but one week. The cost of the boat and engine is estimated at $7,000. No insurance was carried.

Lions club last Thursday night was the scene of a lot of good fellowship and an interesting program. In an informal discussion by three Green Bay Packers of All-American standing revealed how football enters into the building of character and personality. Promptness, alertness, dependability, cooperation, and clean regular habits are qualities that dove-tail right into the game of life. The players present were Leo Evans of Texas Christian, Don Sauer of Nebraska and Swede Svensen of Minnesota. They proved to be regular fellows and made a fine impression on all members and guests present.