It may be next summer or the one after that, but someday Plum Island will be open for visitors. 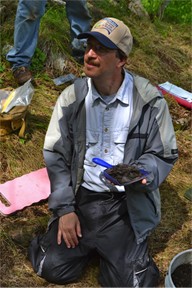 James Myster, regional archaeologist for the U.S. Fish and Wildlife Service, is leading a dig on Plum Island in Door County to investigate the ruins of the island’s first lighthouse built in 1849. He has a professor and a group of students with him from Hamline University in St. Paul, Minn., who are assisting with the two-week long project. Photo by Tim Sweet.

“We recently completed our comprehensive conservation plan for the island which finalized the process we had to go through to open the refuge to public use,” said Sadie O’Dell, biologist for the U.S. Fisheries and Wildlife Service.

Plum Island is located between the mainland of Door County and Washington Island and has been a nature preserve since 2007 when it became part of the Green Bay National Wildlife Refuge. It is home to 325 acres of forest, migratory birds and the ruin of a lighthouse built more than a century ago.

“In 1849 they built this Plum Island light, but apparently it wasn’t well constructed because within about nine or 10 years the building started to fall apart,” said Tim Sweet, president of the Plum and Pilot Islands Friends Group. “It also apparently was not put in the correct location to mark the entrance of Death’s Door passage off of Lake Michigan, so by 1858 the federal government decided they were going to build a light on Pilot Island to accomplish the purpose of guiding ships into Death’s Door passage, and they abandoned the lighthouse on Plum Island at that time.”

But the ruins are still there, and Sweet said they would make a perfect educational site for the island’s future visitors. 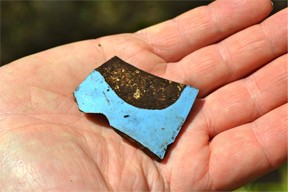 The broken piece of a ceramic dish or plate found during the dig. Photo by Tim Sweet.

Sweet went out to Plum Island with a handful of volunteer university students and James Myster, the U.S. Fish and Wildlife Service’s regional archaeologist, to look at the site and learn more about it.

“They’re inventorying the ruins of the old lighthouse that is out there on Plum Island to put a picture together of what that lighthouse might have looked like, what materials were used, any pieces they can put together from the artifacts to figure out more info about that structure,” O’Dell said. “That will be really useful for us as the refuge to provide more interpretive information. When people do go visit out there, we can have signs that explain more about that ruin that’s out there.”

When it opens, Plum Island will welcome visitors during the daytime from Memorial Day through Labor Day. Volunteers are building a system of trails around the island, and O’Dell said the island will be open to kayakers and private boats, and might allow charter tours to go to the island in the future.