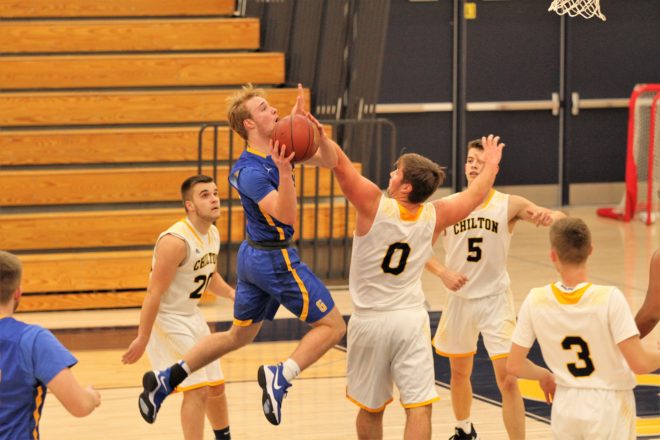 The Vikings exorcised the demons of heart-breaking regional title games of the past when they defeated Phelps 63-32 Saturday to win their first regional crown since 1974.

Gibraltar coasted through its games against regional opponents in the last two weeks. The No. 5 seeded Vikings won three games by an average of 33 points, including a 29-point win over No. 4 seed Florence and a 31-point win over top seeded Phelps in the final.

“We had two large goals at the start of the season: finish 500 or better and win a regional championship,” Gibraltar coach Justin Buress said following the win over Phelps. “With our strength of schedule we knew that we needed to win at least half of our games to be in position to advance in the postseason. Playing division 3 and 4 teams also helps as we moved into division 5.”

The strength of the Vikings in the postseason has been its balanced scoring. Five players are scoring 7.5 points or better, led by Evan Henry with 11.3 per game and followed by Trevor Reinhardt and Andras Szakala at 11 and 10 points, respectively. Brady Ash and Luke Steebs are both averaging 9.3 points, and Ryan Murphy rounds out the scoring balance with 7.5 points per outing.

Henry and Szakala are averaging 8.6 rebounds a game and Ash has grabbed 6.0.  Henry has dished out 5.6 assists and Steebs comes in with 5 per game.

“They are very balanced with a lot of nice players,” NEW coach Mark Meerstein said. “They have also had a few people that have good games against us. [Our success] will be how we play as a unit.”

NEW enters the sectional semifinal on a run of success rivaled by few within Wisconsin. The Blazers have made it to the state tournament seven times in the last nine years, including a state semifinal appearance last year. The Blazers were state runner-up in 2010, 2013 and 2014, and won a Wisconsin Independent Schools Athletic Association title in 1998.

“There is no advantage,” said Meerstein when asked if his program’s postseason experience provides an advantage. “It is one basketball game with two evenly matched teams.”

Packerland Conference Player of the Year Sam Meerstein leads the Blazers with 21.2 points per game. The 6-foot-4 senior also leads his team with 6.6 rebounds and 3.7 assists per outing. Jacob Champeau and Lucas Bukowski both average 9.4 points and game, and Chip Kindt adds 5.1 rebounds.

“I have great respect for Meerstein,” Burress said. “He is a great player. We will try to hold him below his season averages and keep him off the glass. Besides that, we have to make sure that their outside shooters don’t get hot.”

“The key with Sam is getting all five guys defensively to stop him,” Southern Door coach Derik Hawkey said. “It takes a team defensive to hold him in check, knowing that if he doesn’t have 25 plus points they most likely don’t win. We’ve had games over the past three seasons where we held him in check but he’s also had games where he’s put up close to 30.”

NEW earned a regular season split with Gibraltar with a 63-54 road win on Valentine’s Day.  Meerstein paced the Blazers with 19 points and Henry was the Vikings’ scoring leader with 22. Gibraltar held a 26-21 lead at halftime, but NEW rallied in the second half for the win. In the last six meetings, each team has won three games.

“One huge benefit of knowing our opponent in the postseason is that we know their game plan for the most part,” Burress said. “This allows us to dive deeper into film and start to look at individual tendencies. Our players know that we can beat them. The only disadvantage is NEW knows as much about us as we do about them.”

The last time Gibraltar made it to the regional championship was in 2010, when NEW stopped the Vikings 60-58 and went on to finish runners-up in Division 4.

“That 2010 loss still stings,” said Myle Dannhausen Jr., Gibraltar’s head coach in 2010. “We had won something like 12 of 13 games, and our guards were really clicking. But our point guard was out that game, and coach Meerstein had a good scheme to neutralize our size advantage. If I’m honest, I’m still not over that loss. I think we make it to Madison that year if we win that game.”

Despite the Vikings’ short postseason resume compared to the Blazers, Burress said he is confident his team won’t be affected by the pressure of the game.

“It’s a big stage, but the buckets are still 10 feet off the ground,” he said. “We set team and individual goals before each game and we will do the same in this situation and look to execute. You may see some nerves early, but I believe we will settle in quickly.”