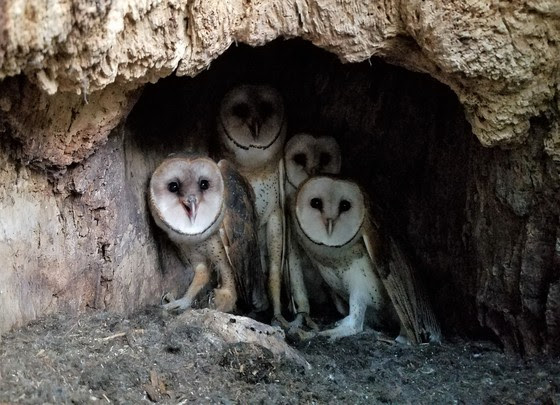 A barn owl nest was found in Wisconsin for the first time in more than 20 years. Photo by Karla Bloem.

The Wisconsin Department of Natural Resources (DNR) reports that a barn owl nest was documented in Wisconsin for the first time in more than 20 years. It was spotted in September after a young barn owl fell out of a dead tree in a La Crosse resident’s backyard and was picked up by the Coulee Region Humane Society in Onalaska.

Karla Bloem, executive director of the International Owl Center in Houston, Minnesota, visited the site to investigate. Bloem put a camera scope into the tree cavity and found a pair of barn owls and three owlets.

“This is an exciting development for Wisconsin, as this nest could have easily gone undetected,” said Ryan Brady, DNR conservation biologist and bird-monitoring coordinator. “Kudos to the staff at Coulee Region Humane, Karla from the International Owl Center for diligent follow-up and the homeowners who provided a habitat to foster this historic nest!”

Although there’s been an uptick in barn owl sightings in Wisconsin and other Upper Midwestern states – and there has been speculation that a few may be nesting now in southern Wisconsin – this is the first time in more than two decades that a nest has been confirmed.