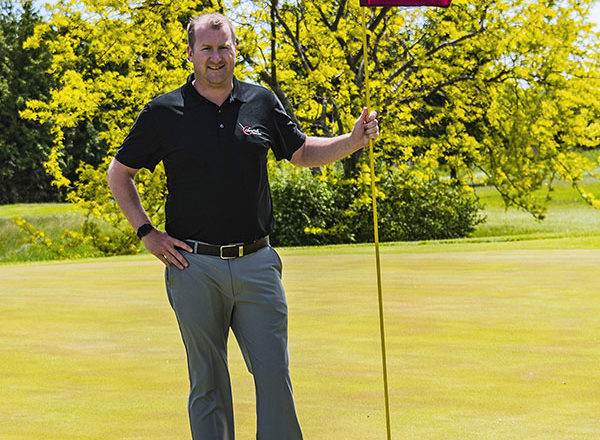 Jon Martell has spent three years restoring fairways and relationships with golfers at Cherry Hills Golf and Lodge outside of Sturgeon Bay. Photo by Len Villano.

Owning a golf course is a risky proposition these days. What were once profitable 18-hole, real estate-bound business opportunities have devolved into precarious pet projects for millionaires. And success, at least for many of Wisconsin’s public courses, remains largely dependent on the inconsistent hand of Mother Nature.
More than 100 courses close each year nationwide. The revenue margins are too slim, and the wide-open spaces owned by many cities or counties are deemed better room for…anything else. Such was likely the fate for Cherry Hills Golf and Lodge, tucked just one mile west of Highway 42, three miles north of Sturgeon Bay, until Jon Martell returned to the Dairy State.

Rest assured, Martell is no millionaire fooling around with a cool pension on his favorite plot of land. Quite the opposite, really. He’s a 38-year-old ex-Marine who happens to be a golf junkie. In early 2015, just one week into his move back to Wisconsin from the East Coast, Martell was introduced to a course and hotel that had floundered during the 2008 recession and was eventually foreclosed upon. The word “risk” didn’t do the situation justice.

“Everything seemed somewhat disheveled, in disrepair or neglected,” Martell recalled. “The hotel was idle. There were a lot of things that needed to be cleaned out. I ended up bringing some friends in and asked them what they thought. Everyone saw the opportunity, but they saw all the work in it, too. That was where I had to step up.”

Martell grew up caddying near Manitowoc, Wisconsin, and parlayed his early love of golf into managerial stints at Whistling Straits (Kohler, Wisconsin) and Liberty National (Jersey City, New Jersey), two of the most elegant golf courses in the country. They serve as evidence not only for Martell’s golf background, but also as distant cousins of the skeleton that Cherry Hills was when Martell arrived.

It wasn’t so much that Cherry Hills had died; rather, it failed to grow or evolve. The bank hadn’t shuttered the course, but it wasn’t helping it thrive. The carpeting in the banquet hall wasn’t just old, it was filthy. The golf course wasn’t just shaggier than ever, it was also encroached upon by dandelions and unfriendly weeds. Maintenance equipment that sufficed for years was dated and inefficient.

“For awhile there the greens were like a lunar landscape,” said Thomas Jordan, 68, who has played the course for two decades. “Back then, if you were 20 feet from the hole, instead of putting it, someone would say, ‘Ah, just take two strokes. Let’s get going.’”

Cherry Hills, already modest in its offerings, had become a last-ditch option for local and vacationing golfers alike. In all of that, somehow Martell saw opportunity. It’s funny how changes in scenery can usher in a wave of optimism. 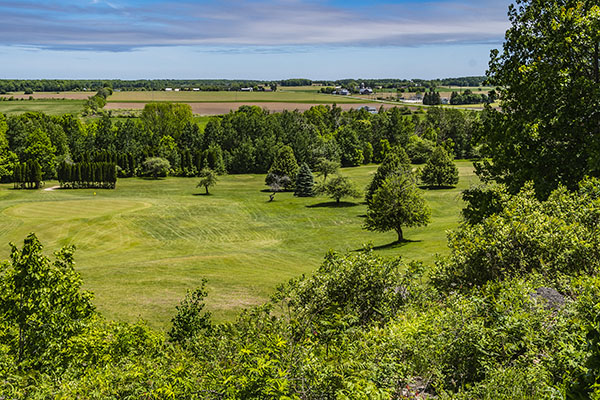 “One of the best moments I had early on was when the snow melted. I couldn’t wait to get out there,” he said. “Walking the course, I could remember every single hole. I could feel the vision of the designer. I could see the character of the course. I’m walking it with no clubs, no balls. Just feeling it and playing it in my mind.”

This is where the recent struggles of Cherry Hills came in handy. The bank made it easy for Martell to sign simple, one-year leases of the property, and he’d operate it as his own new business. If Priority A was to fix the course, step one was repairing the equipment. When course improvements started slowly, he turned his gaze on the banquet room, which felt decrepit. He parked a dumpster near the entrance and made trip after trip — back and forth hundreds of times — ridding the building of anything that didn’t fit with his vision of Cherry Hills 2.0. His work was incremental and reactive. Short on help that first summer, he put his boots on and mowed fairways twice a week. And when he reached points of “Do I or do I not fund this?” the answer was always clear.

“It gets scary with the money, but if this was something that needs to happen, it can’t just not happen,” Martell said. “You do it because it’s what the business needs. It can’t stop just because you don’t want to spend a couple hundred or a thousand dollars on a particular project.”

Martell took over knowing he had to run the business as if he owned it. He was conscious that even though this wasn’t “public property,” the property was public in nature, and his name was on the lease. Eighteen months into the project, much to his delight, Nicolet Bank was desperate to sell the property. Martell reeled in some help, in the form of a friend and two other partners. After a year-and-a-half of investment, Cherry Hills was now 25 percent his.

Not all of the course rebuilding is physical. Martell is rebuilding relationships as well. Late last fall, after closing the pro shop, he left the golf carts outdoors, creating a hiding spot for cart keys for his most avid customers. Whenever they wanted to play, they could grab a key from that hiding spot. (No, you won’t find it.) In November 2017 it made Cherry Hills the most accessible course in the county. Now in the summer of 2018, Jordan and his golf buddies play Cherry Hills religiously, meeting twice a week (sometimes even more), for a two-man scramble.

“Cherry Hills seems to attract the kind of golfer who loves the game more than they take themselves seriously,” Jordan said confidently. “When you play with a group of guys and you don’t really care how you scored but you just had a great time. That’s Cherry Hills.”

After a record April snowstorm caused a slow start to the 2018 season, the course won’t be breaking any revenue records in 2018, but it will continue taking steps forward.

“There are a lot of variables that affect what I can do. But as I knock down those wickets, I will move on to the next one as the resources allow me to,” he said. “My biggest thing is this — if I’m here three years or 20 years, something is going to be much better every time.”