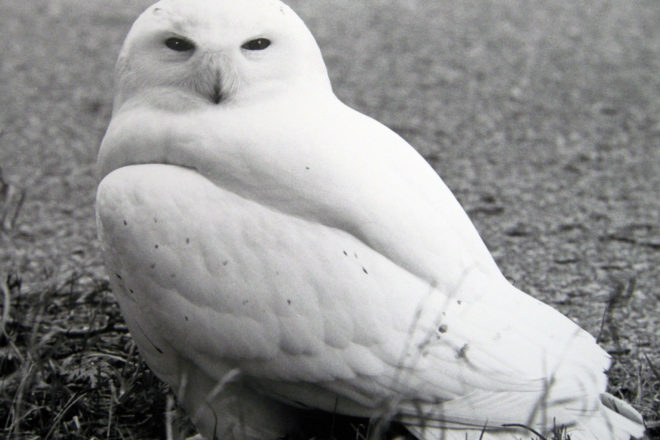 When you talk about owls you normally think of them hunting and being active at night while resting during the day. If you include the owls that move into our area during the winter from the far north you may be surprised that most are diurnal, meaning they hunt in daylight hours.

The Snowy Owl is the most common of the winter visitors and has been seen in Door County every few years when conditions in the Arctic cause food shortages. They feed on rodents in the tundra called lemmings. These creatures have significant population surges and failures, often on a four-year cycle.

It is quite apparent that larger winter flights into the northern U.S. occur on a cyclical basis depending upon the availability of prey on the owls’ home range. Samuel D. Robbins, Jr., in his excellent book Wisconsin Birdlife, quotes our friend Tom Erdman:  “Generally the peak (of Snowy Owl invasions) lasts two years. The first is made up of mostly immatures, and the second year is largely adults. Then few birds are recorded for two years.”

The Snowy Owl you see having considerable dark spotting on its breast and back is most likely a female while the overall white owl will usually be a male. Young birds of both sexes are darker until their first postnuptial (after breeding) molt of the first winter plumage that will occur about 13 to 14 months after hatching.

These strikingly beautiful owls are the heaviest of all 18 species of owls native to North America. Average weight of the females is three and three-fourths pounds, slightly heavier than the males. The females’ wingspan will average a little less than 5.5 feet. Their total length, including a nine- to 10-inch tail, is around 25 inches.

These extraordinarily patient owls have long wings, relatively broad and rounded at the tips. Their deep and powerful wing strokes while in flight were impressed upon me many years ago as I photographed a large female carrying in her talons a freshly killed Green Heron. The heron, weighing only about a half-pound, was easily carried aloft by the owl that is known to carry a creature weighing as much as twice its own weight. 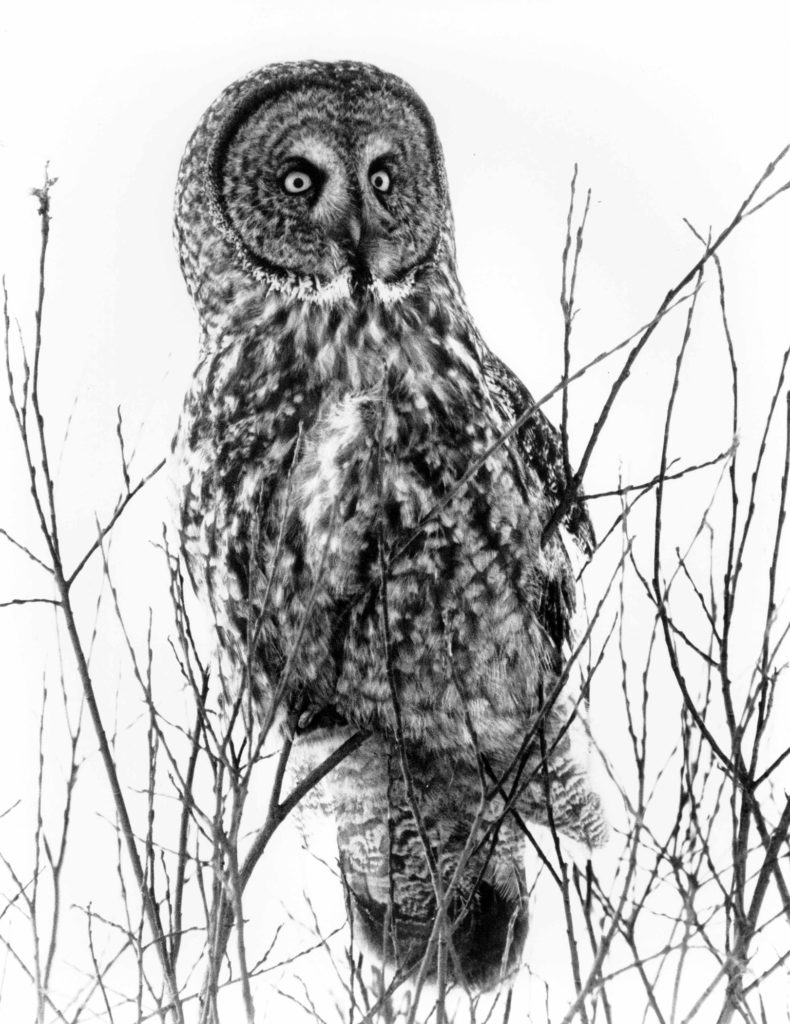 The winter of 1996-97 was a “northern owl winter” of exceptional magnitude. This group of raptors included the Great Gray, Snowy, Boreal and Northern Hawk Owls, all nesters as far north as Hudson Bay and beyond. Statewide reports that year tallied more than 50 Great Gray Owls alone; the highest totals coming from the central and western parts of Wisconsin.

People involved with the Wisconsin Foundation for Wildlife Research in central Wisconsin reported 24 of the huge owls and trapped and banded 10 of them. Most of the birds were males that appeared to be in good health.

Unfortunately that was not the case for the Boreal Owls, according to reports from the Minnesota Department of Natural Resources. That winter, Boreal Owls and other northern owls were forced to fly south in search of food because of the deep snow and apparent shortage of small mammal prey. Many of the Boreal Owls arrived in emaciated condition and a lot of them did not survive. There were 176 dead Boreal Owls eventually recovered. The thought was that at least four times that number perished.

In March of 1997 a Sevastopol school bus driver alerted us to a Great Gray Owl perched on top of a power pole along Highway A just north of Jacksonport. Fortunately the owl was still there when we arrived with our cameras. I had approached to within about 40 yards of the owl when it took off, glided gently and silently downward and perched atop a 12-foot tall willow shrub. How intently it concentrated on looking and listening for any prey moving beneath the deep snow, and it appeared quite oblivious to my approach. I snapped a few more pictures, ran out of film, went back to the car to reload the camera and it never moved.

Soon the gradual stalking had me within 18 feet of the majestic bird. Now I could see its dazzling yellow irises, the bird’s unusually flat face when it turned sideways, the gorgeous facial discs and its thick loose-flowing plumage. What a breathtaking experience to be so close to the largest of the owls of North America!

The Great Gray Owl belongs to the genus Strix, a group of 11 worldwide species of woodland owls. Included in this group in North America are the Barred and Spotted owls. The Great Gray has the greatest maximum total length of all North American owls, around 33.5 inches, including a tail that is slightly longer than 13 inches, longest of all our owls.

Many local birdwatchers will remember the winter of 2012-13 for the first visit of a Northern Hawk Owl to our county in more than 35 years. It was originally thought to be a Boreal Owl but then finally identified on November 24, 2012 as a Northern Hawk Owl. It was last seen by Nick Anderson on April 24, 2013 — a full five months of residence!

The Northern Hawk Owl is between 15 and 17 inches long, including its approximately seven-inch-long tail. The owl’s habit of hunting for nearly all its food during daylight hours was fortunate for the many birders who drove up from other Midwestern states to view this rare visitor. 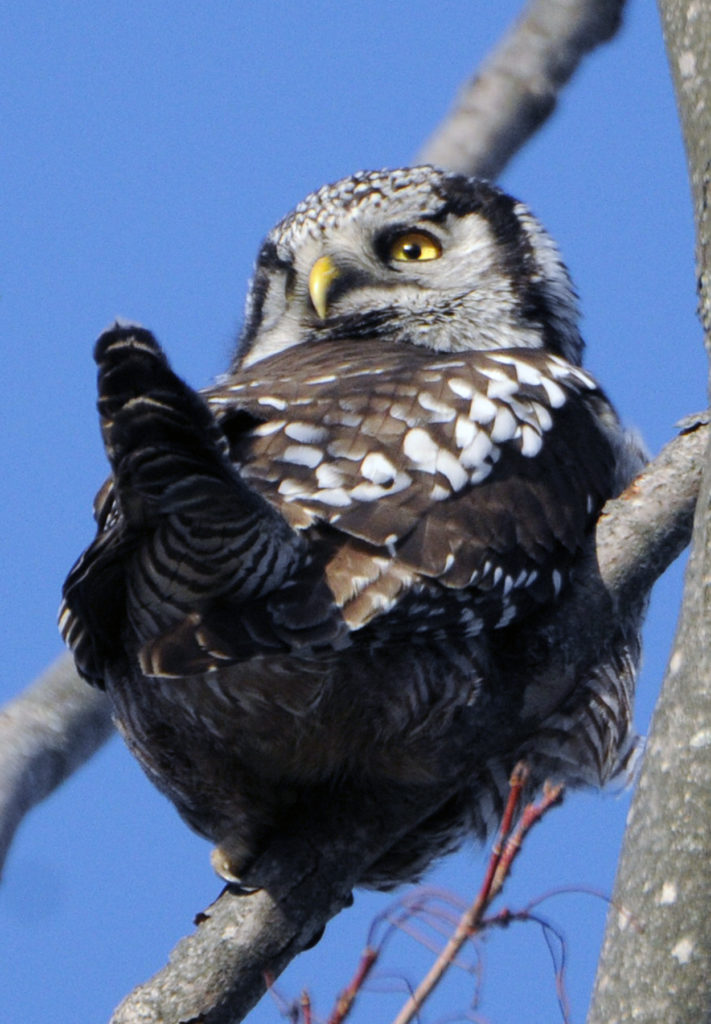 Owls, like this Northern Hawk Owl, have the ability to turn their heads 180 degrees and can look behind them. Photo by Roy Lukes.

Many references say that it has the same silent flight of owls, a trait claimed to be designed by nature so as to not frighten the prey away. A more accurate interpretation is that the Northern Hawk Owl, like other owls, will be capable of hearing the thin vocal or movement noises of a rodent much better without the rushing sound of its own wings which are located very close to the owl’s ears.

The bird had good hunting at the location a few miles south of Sister Bay feasting on mice and meadow voles. It is known to take ptarmigans, which are capable of remaining on top of deep snow, while in the far north. That prey is considerably heavier than the much smaller owl.

Another Northern Hawk Owl was seen for three to four months during the winter of 2014-15 just south of Eau Claire in western Wisconsin. It apparently had good hunting as it stayed in the same area so that birders from hundreds of miles away could drive there to see it.

We might have to wait two years for another Snowy Owl invasion. The winters of 2015 and 2016 saw many snowies in the state. Since they are on a four-year cycle we’ll hope for another influx during the winter of 2018-19.

Our birds of prey, including the stately “white terror of the north,” occupy a vital niche. They actually help many other species of animals to maintain a stronger race. Respect these spectacular creatures and help to preserve them. They will do you no harm.