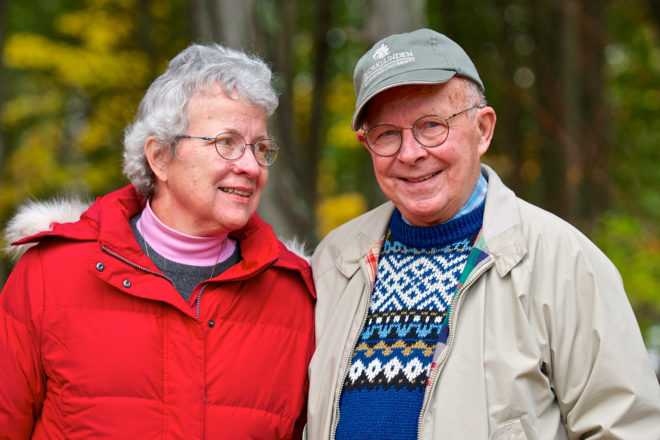 Charlotte and Roy Lukes at The Ridges in 2013. Photo by Len Villano.

On Saturday, April 14, Roy and Charlotte Lukes will join the ranks of John Muir, Increase Lapham, Aldo Leopold, Sigurd Olson, Gaylord Nelson and 87 other past inductees of the Wisconsin Conservation Hall of Fame.

“It’s amazing,” Charlotte Lukes said of the honor being bestowed on her and her late husband. Roy died at the age of 86 on June 26, 2016. “Roy would have been amazed and very pleased, but he was a quiet, sensitive person who just enjoyed what he was doing.”

Door County residents Roy Thilly and Tim Stone did the work of nominating Roy and Charlotte to the Conservation Hall of Fame for spending their lives “protecting the natural beauty of the peninsula and sharing its magic through their teachings, writings, and personal charm.”

Charlotte grew up in Milwaukee and admits that as a city girl attending public school, her nature education was limited to knowing the state bird, flower and tree. 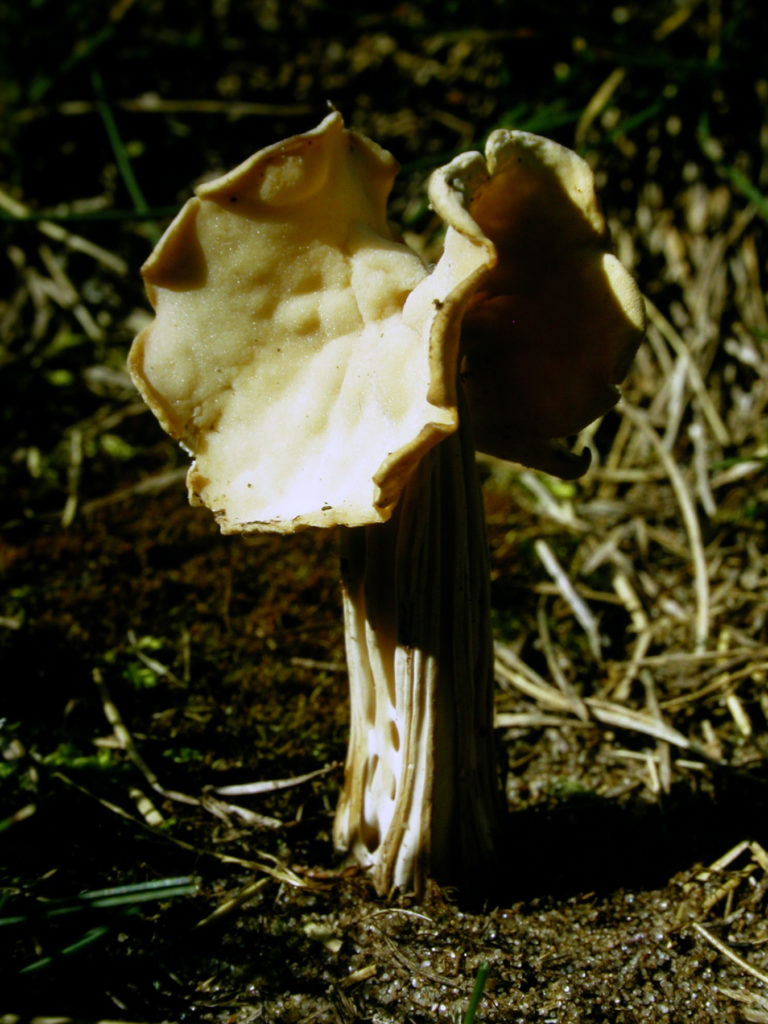 Charlotte Lukes’ first mushroom photo, of the saddle mushroom, Helvella crispa. As a former English-style rider, Charlotte was attracted to the look of this fungus. Photo by Charlotte Lukes.

In May 1964, Charlotte started working as a dental hygienist, and one month later, the man who would become her husband but was completely unknown to her at this time became the first resident manager/naturalist at The Ridges Sanctuary.

Charlotte had some familiarity with Door County thanks to a college friend. In the summer of 1971, Charlotte noticed that one of her patients in the dental office had a summer home in Baileys Harbor.

“I told her that I had bought a new single lens reflex camera. I was going to get into photography,” Charlotte said. “She said to come up and visit her, so I did. She’s the one that introduced me to Roy. I am so thankful that I met Roy. I was always kind of a tomboy. I liked the outdoors but never knew that much about it. When I met him in the summer of ’71, I was learning about so many things. We would hike out to Toft Point. It just opened up a whole new world.”

That next May, Charlotte and Roy were married and Charlotte also now called The Ridges home.

“I needed to get a job as a hygienist just to supplement our income, but I took the whole summer of ’72 off to learn the plants and the birds and the animals and learn The Ridges and get to meet the friends that would come up to give programs,” she said. “We had Thursday evening programs at the town hall from early June through to Labor Day, free to the public. I got to meet these fabulous people and have adventures.”

The couple became true partners in nature, with Charlotte contributing drawings and photographs for Roy’s five nature books and assisting him with the weekly nature columns that he started in the summer of 1968 and that Charlotte continues to this day in the Peninsula Pulse. In his 1976 book Once Around the Sun: A Door County Journal, Roy credits Charlotte with providing him with inspiration and spending many hours proofreading and correcting his text.

During a hike at The Ridges one day in 1973, Charlotte happened upon a lactarius indigo, an edible blue mushroom.

“It was pale blue with a little dip in the center,” she said. “I lifted it out and looked at it. Then I cut it in half. The inside was white, but as soon as it hit the air it turned this rich, deep blue, which was fascinating.”

That fall she took a mushroom class at The Clearing, and just three years later, in 1976, she was leading half-day mushroom workshops at The Ridges Nature Center, and then leading people on hikes to find mushrooms. Today Charlotte is considered an expert on the mushrooms of Door County. She has identified 575 species.

Charlotte is proud that she and Roy promoted citizen science.

“All the awards Roy has gotten are nice, but he would have still done what he was doing,” she said. “It was just something he loved to do and felt it was so important, especially with young people, to get them, like he always said, to look around you and be aware of your environment and appreciate it, because if you don’t appreciate it, you’re not going to care about saving it. I’m afraid so many people are on the other end, busy with their virtual reality rather than real reality.”

Charlotte is expecting a good turnout of family and friends for the induction ceremony to be held at the Sentry Theatre in Stevens Point at 10 am April 14. The event begins with a 9 am reception, and ends with a 12:30 pm luncheon at the Sentry World Center (lunch costs $25 and reservations must be made by calling 715.346.4992).

Also being inducted that day are former Wisconsin Department of Natural Resources Secretary George Meyer, who now serves as executive director of the Wisconsin Wildlife Federation, and Arlie Schorger (1884-1972), a wildlife conservationist and personal friend of Aldo Leopold who is perhaps best known for his 1955 award-winning book The Passenger Pigeon:  Its Natural History and Extinction.