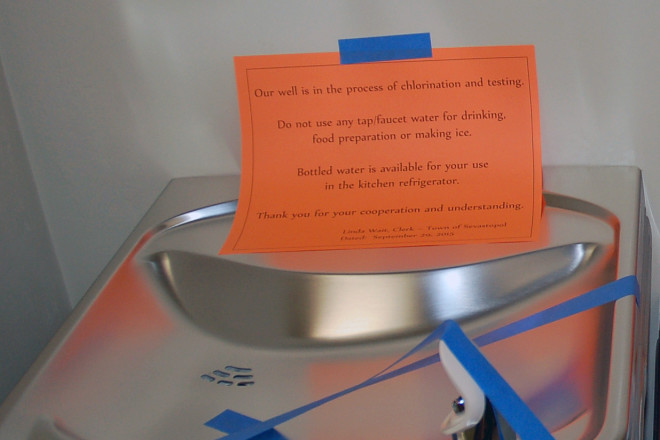 The water fountains and bathroom sinks at Sevastopol’s Town Hall carry a warning not to drink the water since its tested for coliform and e. coli for the fourth time since the town moved into the hall in April 2009. Photo by Jim Lundstrom.

Town of Sevastopol officials discussed at an Oct. 2 meeting what to do with the well that serves the town hall after the latest quarterly testing revealed contamination of the water supply by coliform and E. coli bacteria. The presence of either bacteria in water indicates fecal contamination.

“Being a public building, we do have to test on a quarterly basis,” said Sevastopol Town Clerk Linda Wait. She said samples were drawn in late September from the town hall well and the town park well.

“The town park was fine. The town hall was not,” Wait said.

When a bad sample is taken, the Wisconsin Department of Natural Resources sends four bottles for a new round of samples.

“All four samples reflected coliform and one had E. coli,” Wait said.

That meant posting notices not to drink the water or use it to make ice, buying bottled water and hiring a plumber to chlorinate the well.

“I am crossing my fingers that this was just a fluke from the amount of rainfall and that it will be cured,” Wait said. “If not, we can do the chlorination up to three times. We’ve always managed to clear it up on the second try.”

“It’s always in the fall for some reason,” Wait said.

At the Oct. 2, meeting, town Supervisor Chuck Tice said the town has three options: Close the well and drill a new one; buy a water purification system; or tap into the town park’s water.

“That’s a heck of a run,” Supervisor Dan Woelfel said to the third option.

“Drilling a well doesn’t guarantee a thing,” Wait said to the first option. “An ultraviolet system will guarantee good water. The Town of Egg Harbor had the same problem up until a few years ago. They bit the bullet and bought the ultraviolet system. That cost is about $12,000, plus yearly maintenance.”

“Why not have an expert come and look at it?” suggested Supervisor John Staveness.

Being right next to Sevastopol School, Wait asked how the school how their water tested. She was told they have had bad samples in the past, but not this quarter.

Supervisor Tony Haen asked, “Is it a coincidence that when the school is going, our water suddenly goes bad? Could there be a break in sewage?”

Tice was charged with contacting a well driller to find out what the cost would be to either drill deeper in the existing 257-foot well, or drill a new well, while Wait was charged with coming up with numbers for a purification system.