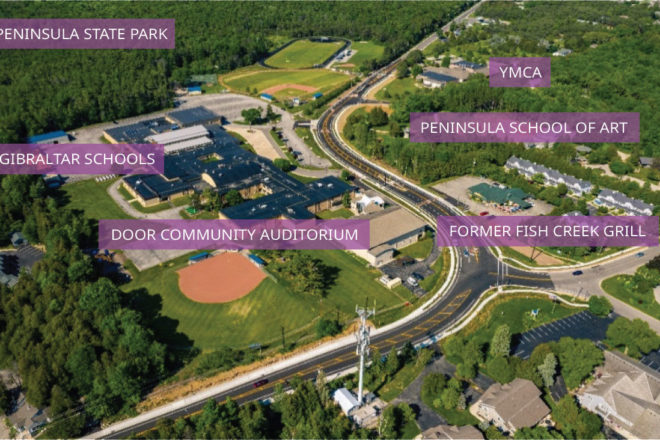 The recent installation of sidewalks, lighting and an ADA-compliant crosswalk with flashing lights and median has improved passage between the two properties.

A bare lot is all that remains of the former Fish Creek Grill/Carlos Bandito’s Cantina building in Fish Creek across from Door Community Auditorium (DCA) following last week’s demolition. Now the scraped-clean site creates a base for the Phase II plans of DCA’s growth through its Annex project.

During the weeks leading up to Boldt Construction’s demolition, DCA emptied the building by donating all of its contents – sinks, coolers, refrigerators, furniture – to Door County Habitat for Humanity. After that, “it was fast,” said Cari Lewis, DCA executive director, about the bulk of the demolition done in a day.

Getting rid of an existing building may be quick, but creating DCA’s new, 5,000-square-foot annex property will take some time. Lewis said they’re solidifying plans currently and expect to put the project out to bid later this year. That also depends on successfully raising the $2 million to $3 million they’re estimating the project will cost.

Those at DCA know how they want to use the space. The organization purchased the building and property at 3931 Highway 42 last year to solve decades-long problems, including inadequate nearby parking for patrons with mobility issues, limited restroom capacity and ADA-compliant restrooms, and overcrowded office space.

Programming and partnership possibilities for the space include social events before and after performances with artists and soft spirits, cultural instruction, rehearsal space, and a dedicated space for small performances.

But DCA is also taking public input and ideas throughout the summer, hoping to learn “more of what’s important to the community,” Lewis said.

They’re also asking community members to share their stories and memories about the now-demolished building and its many different lives, looking to use those recollections in a story-slam event or a design aspect of the new space.

DCA originally planned to renovate the building, but after inspecting it and having months of conversation and analysis about renovation versus new construction, DCA decided the best option was to build a new, energy-efficient structure to serve its long-term needs. Renovation would have required replacing the building’s exterior and interior, electrical and mechanical overhauls, and dealing with foundation issues and mold.

“As we went further down that road, it became clear that we’d likely reach the threshold of renovation that requires that everything be brought up to comply with modern code, and we’d still be left with a building that immediately needed ongoing maintenance and repairs, wasn’t energy efficient, and hindered our intended programming and usage,” DCA said in its June 8 e-newsletter. “And so, we’re starting from scratch.”

If you have a good story about the former building or ideas for the future Door Community Annex, or want to donate to the project, visit dcauditorium.org/expansion.

“We are looking for donors at every stage,” Lewis said.