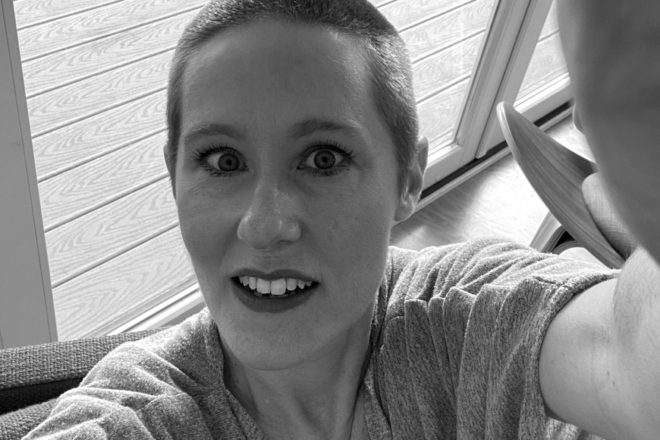 After penning 167 pages about color and 160 more about patterns, Jude Stewart was sick of writing about things she could see. So in her latest book, she switched to a different sense: smell.

“Sometimes we’re aware of smell, but not often enough, and sometimes it is acting on us in ways that we’re not aware of,” Stewart said. “It’s informing our sense of reality without us having any clue.”

Stewart, who is now serving as an author-in-residence at Write On, Door County for the second time, became far more aware of her sense of smell after writing a book about it.

Inspiration for that book, titled Revelations in Air: A Guidebook to Smell, found Stewart in Berlin. There, she visited an art exhibit called Smeller 2.0.

Attendees entered a hermetically-sealed room, where a machine that looked like a pipe organ stood on one wall. The machine shot out a rapid-fire series of smells, from bandaids to oranges.

Stewart was surprised by the range of emotions that the smells produced in her.

“It was like being connected to an electric socket,” Stewart said. “It was exhilarating, upsetting, all these emotions.”

The exhibit sent her down a rabbit hole of research into smell — research that culminated in her book, which explores the science, history, psychology and cultural impact of smell.

It also includes descriptions of various smells, which Stewart said was a challenge for her. She often had to fight an impulse to describe smells by simply identifying their source (i.e., “that smells like cinnamon.”)

But to accurately describe smells, even the most recognizable aromas needed more interrogation. Sure, it smells like cinnamon, but what does cinnamon smell like? How do you know it’s cinnamon? What memories and feelings do we associate with it?

Asking questions like these wasn’t just helpful in her writing process — it was also a good way of grounding herself in the moment, Stewart said.

“When COVID came along, I had the disembodied experience of being on Zoom all the time and never seeing anybody but my family,” Stewart said. “It was that much more important to sort of remind myself that I’m in this place here and now, and smell really does that.”

Smell also has the power to transport people to other times and places, a fact Stewart found first-hand while working on a section of her book about beer. The smell brought her back to the beer gardens of Berlin she used to frequent, reminding her of the crowded bars and the excitement of travel, which she sorely missed during the pandemic.

“This beer takes me right there, and I had a hard time getting over that,” Stewart said. “Then I decided at some point that I had to let that emotion into the frame of the chapter because it’s like, this is part of it.”

Stewart’s writing process involved smelling everything from beer to dirt to perfume to rows of different kinds of vinegar. Surprisingly, the one smell she never grew tired of was pipe tobacco. It’s something smokers consider too; when picking out a type of tobacco, they consider the tin note (how it smells when the container is opened) and the room note (how it smells when it’s smoked.)

The more Stewart thought and wrote about smell, the more she noticed the smells around her. It’s a sense we often overlook — so at her upcoming “smelling tour” at Write On, she wants to make participants more aware of it.

The last tour she facilitated at Write On was in 2019, when she was an author-in-residence for the first time. It was winter at the time of the tour, so she focused on the smell of snow and pine trees. This time, she wants to focus on the smell of leaves, because they’re a perfect example of smell signifying change.