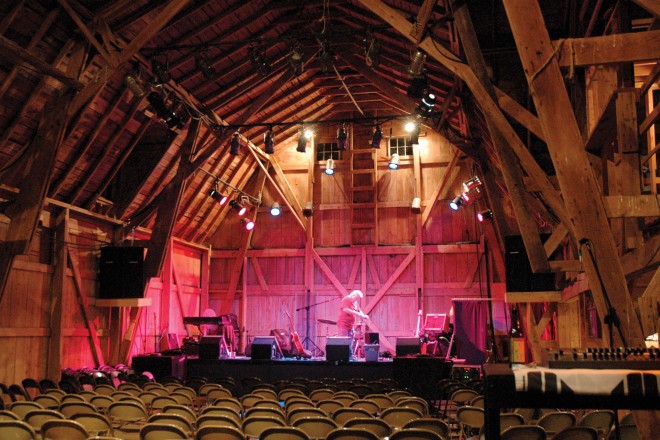 I’ve seen you do it, and I do it, too:  pull over to the side of the road, jump out of the car, and attempt – most often in vain – to capture the essence of a big old wooden Door County barn with a camera.

My particular favorites are those slightly or even largely dilapidated, with sinking rooflines and sagging walls, weathered to the point the original color is indeterminable. I know though, from years of observation, that unfortunately they are usually done for – once a barn looks that way, it is probably going to fall or be torn down.

What is it so many of us love about those old barns? Although it may be the sense of nostalgia they invoke, it is also their construction. “Old barns probably are the most beautiful buildings in Door County… in part because of their use of indigenous materials. They seem a part of the environment. They belong,” according John Kahlert’s Early Door County Buildings and the People Who Built Them 1840-1910. In addition to looking like they physically belong, “old barns have a very human quality. They were made by hand and have the warmth and texture of all hand made objects. Time and weather as well as use have given them a patina new buildings cannot match.”

Most of the big wooden barns in Door County were constructed between 1880 and 1910. This is a few decades later than the oldest residential structures found in the area – early white settlers did not consider the rocky, shallow soil good for farming. In fact, “for many years Door County was not

considered suitable for anything but fishing and lumbering. Farming did not become important until the latter decades of the nineteenth century when the once all-pervasive timber had been extensively cut over,” says Kahlert. And, even when farming was established in the county on a widespread scale, “early farmers grew primarily wheat which did not require major storage facilities.” Wheat growing, however, essentially died out in the state by 1879 due to disease and pests, so by 1900 Door County – along with the rest of Wisconsin – had shifted primarily to dairy farming, and dairy farming required big barns.

Farming is still surviving in many parts of Door County, although it is on the decline, particularly in northern Door where the soil is shallowest and rockiest and the real estate and development pressures greatest. Nowadays, if an old wooden barn is present on a farm, it is found surrounded by newer metal buildings. Northern Door beef cattle farmer Louis Sohns – who though retired still “helps out” the farmer to whom he rents his barns and land – explains, “The main problem is the cost. The old wooden barns are simply too expensive to replace or repair because wood is so expensive. It just doesn’t make financial sense to use wood to put up or repair something that big these days, with inexpensive steel buildings available. Plus, the upkeep cost for wooden barns is significant – all the old barns were always painted regularly to preserve the wood longer, and paint is expensive.” The Sohns’ farm still has the old wooden barn that was there when Louis was born, but the original structure has been sided over with metal in order to make the building last.

In addition to the cost issues associated with building or maintaining wooden barns, they are not necessarily designed to support modern-day farming practices and equipment. Sohns explains further:  “When they built those old wooden barns, they always had lofts which were used to store hay and straw to bed and feed the animals. The loft hay storage served the important purpose of keeping the barns warm in the winter and the animals’ water supply unfrozen. Nowadays, with electricity and heated water tanks, cattle can easily be housed and fed in multiple areas – the old type of barn design isn’t needed or practical.”

Despite the decline in the agricultural use of old wooden barns, some are being converted to other uses. In Door County, barns are now everything from garages to storage buildings, workshops, historical museums, art galleries, and performance art spaces. Renovated barns house Stone’s Throw Winery, Edgewood Orchard Galleries, Hands On Art Studio, Birch Creek Music Performance Center, and part of Peninsula Art School, to name just a few.

Paul Sills, founding director of Second City in Chicago, and his wife Carol have converted the old wooden barn on their property to space Paul uses in the summer to teach week-long intensive improvisational theater classes. Besides the people coming from all over for those classes, Paul’s local community theater troupe uses the barn for rehearsal space. Carol, a visual artist and art teacher who modestly describes herself as merely “the registrar” for Paul’s classes, notes they had not intended to use the barn for theater classes when they moved here in 1970. She says, “When the barn really needed a new roof, though, and really needed to be restructured, that’s when we started this activity! The original barn was built in 1870 – it does have a few slightly newer additions – so it is quite an old building now. Over the years, the classes have paid for its renovation.”

Architect and fine arts instructor Steve Wadzinski, on the other hand, bought an old Belgian barn in Baileys Harbor knowing he wanted to convert it to a gallery and performance space and construct an addition to house a café. He has at times lived in the building during the lengthy renovation process – restoring a barn takes time, particularly when you start a family in the midst of the project! – but notes that the romantic notion of converting an old barn to a residence is often not practical or desirable. Barn smells can linger even decades after agricultural use of the building has ceased, and the conversion to a residence can be long and expensive. Wadzinski’s Rex Gallery and Café, expected to open within a few years, is named after a primitive-looking drawing of a dog labeled Rex – not to mention the mummified dog itself – that he found in the barn when beginning restoration work.

Besides the shift in barn usage in the county, the (re)construction of barns is changing. At least one old barn in northern Door has been torn down and then rebuilt exactly as it was, although with metal siding rather than wood. Wadzinski says his barn, while retaining most of the original structure, has been “modernized a bit – opened up with glass and sheathed in black steel, except for the first level, which is stone.” And, in addition to these modernizing remodeling or replacement projects, some completely new barn-like structures are appearing in the county. Although using modern materials and building

techniques, most are nevertheless designed to look from the outside like old barns, such as artist Craig Blietz’s Liberty Grove home and studio. Blietz explains, “The home was built to look like a barn, and the studio to look like an outbuilding – a granary or ‘support’ building. I feel it’s important, if you’re going to build something new and you have the opportunity to do anything you want, to build something sensitive to the community, the land, and the other buildings in the area. This was historically an agricultural property, so that was my underlying concept in designing the buildings.”

When the old barn structure is not – or cannot – be saved, there is still hope some of it may remain:  “reclaiming” barn wood and beams is increasingly popular for use in homes and other buildings. Joel Bremer, owner of Good Eggs, a breakfast joint in Ephraim, recently used reclaimed barn beams from a southern Door barn to add additional sheltered dining space to his restaurant. Bremer obtained the beams through builder and contractor Russ Cockburn. Several people, in fact, cite Cockburn as the source for projects using barn beams; he himself humbly says he has done “some” projects using recycled barn wood. He notes while using old barn building materials has interested him for a long time, “the first project was about five years ago, where I built a pretty large structure – storage and other space – up in Ellison Bay using primarily reclaimed barn wood.” He has also used reclaimed barn materials for an addition to his own home and for the major kitchen remodel for the Savory Spoon, a new cooking school located in an old Ellison Bay farmhouse.

Cockburn says he “sees the same problems with most of the big barns coming down:  they’re falling down because they weren’t built very well! They always seem to break or need repairs in the same places.” He believes, however, as do others who are renovating or using parts of old barns for new buildings, that “recycling things in general is a good thing to do. Barns are nice old buildings. In many cases they can’t be fixed, so it’s nice to be able to use this old material in other ways.” To obtain barn wood and beams, Cockburn says he at first “approached some people who had barns that were falling down. After a couple of projects, though, people with falling-down barns started calling me! The only option typically is to tear down the building and burn it, so they’re happy to find someone who will take the materials off their hands and re-use them rather than have them go to waste. I’ve also torn down four barns myself, as well as used barn materials salvaged by someone else.”

For those saddened, then, by the decreasing presence of old barns even on agricultural properties in the county, take heart that at least some are being renovated. These beautiful historic structures, and hopefully their stories, if not the agricultural purposes they were designed to serve, are being preserved for generations to come.

Agricultural Heritage and Resources (AHR) is a nonprofit organization based in Kewaunee County whose mission is to “preserve and promote our rural heritage, past present, and future.” AHR offers workshops on barn preservation and has information regarding barn restoration, including names of people who do barn restoration work. Visit their website, www.wisconsinruralheritage.org, e-mail [email protected], or call (920) 388-0604 for more information.

Barns N.O.W., part of the Wisconsin Trust for Historic Preservation, also has information on barn preservation. Call (608) 255-0348 for more information.