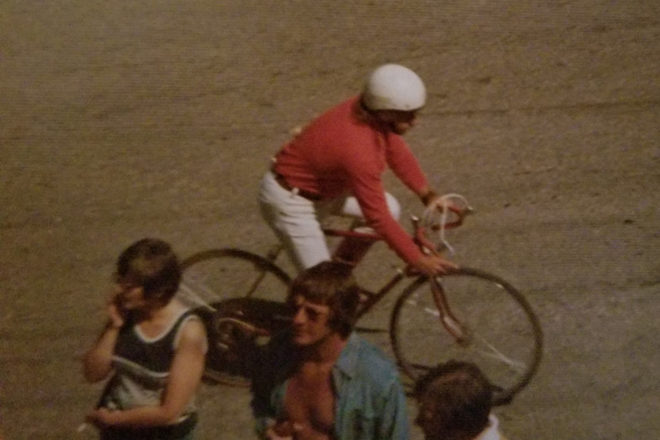 Digger DeGroot warms up for his daredevil leap over five cars on the Fish Creek hill in 1973. Photo courtesy of Rick Jacobs.

It was the biggest daredevil stunt Door County had ever seen.

James “Digger” DeGroot had announced that he would jump five cars on his bike at the bottom of the Fish Creek hill on Independence Day, 1973. Digger kept talking about it, and friends began promoting the event.

“Sounded like a good idea, but it got away from him,” recalled his friend Rick Jacobs.

Recollections of it are fuzzy, because, well, for many of Digger’s cohorts of the time, the 1970s are pretty fuzzy in general. But the story goes something like this.

By the time the big day arrived, a large crowd had gathered along the highway and on the roof of the (then) C&C Supper Club to witness the death-defying feat. Door County Sheriff Hollis “Baldy” Bridenhagen had sanctioned it, stopping traffic on the hill during the peak of summer to make way for the spectacular leap.

Digger warmed up with a few circles and warm-up runs, then sped down the hill, launched himself off the ramp, and cleared all five cars – Matchbox cars.

“It was very anticlimactic,” Jacobs said.

Digger landed, pedaled into the Peninsula Players van that was waiting at the bottom of the hill, and drove off before an angry mob could descend upon him.

Bridenhagen was irritated – he had hoped to witness an amazing feat.

Digger wouldn’t open his eponymous restaurant for another five years, but he was already a legend.