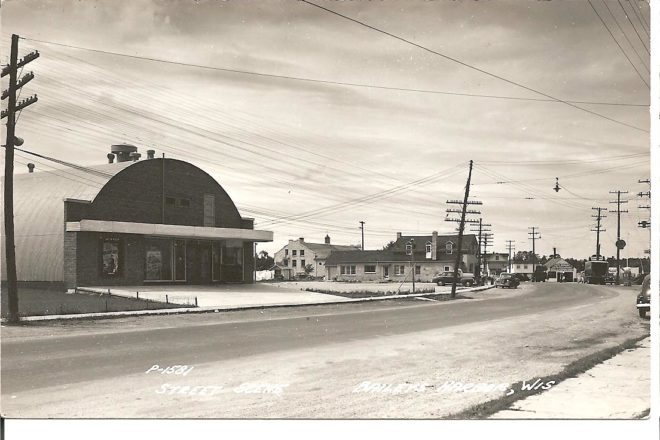 The Lake Theatre (later Lake Cinema) was a home for cinema in Baileys Harbor for 50 years. Submitted. 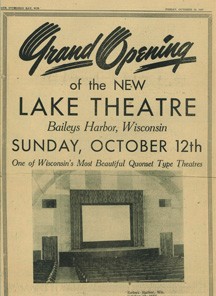 An ad for the Grand Opening of the Lake Theatre in 1947.

To the generations that remember World War II, Quonset Hut is a familiar name. Beginning in 1941, more than 170,000 of the homely structures were manufactured for the U.S. military in Quonset Point, R.I. After the war, they were sold to the public for $1,000 each. Some transitioned to civilian life as homes; most became businesses. Theatretreasures.org documents 93 that were turned into movie theaters in 26 states and four foreign countries. California had 18 of them and Wisconsin four, including the Lake Theatre in tiny Baileys Harbor.

Before they returned from service in 1947, Orville and Elton Voeks, whose parents owned the general store across from the Catholic church in Baileys Harbor, told the family they were interested in opening a movie theatre. At that time, the only movies north of Sturgeon Bay were those shown on Saturday nights in Sister Bay and on Sunday nights in Schram’s Hall in Baileys Harbor (now the Harbor Fish Market and Grille) by Arthur Brungraber, a photographer from Jacksonport, who had begun his programs in the era of silent films.

The Voeks brothers had seen one of Wisconsin’s other Quonset Hut movie houses and decided the price would fit their budget. Their sister, Ruby, was married to Thor Toft, a naval officer with a law degree and a nephew of Emma Toft. Thor helped his brothers-in-law by scouting out a likely location on Highway 57 in downtown Baileys Harbor.

Orville and Elton worked with Joe Zettel to prepare the foundation, and within months after their return home, the theater was in operation. (The prefab Quonset Huts had been designed for easy assembly – eight men could put one up in a day.) An open house was held on Saturday afternoon, Oct. 11, and four showings of the first film, Cheyenne, starring Jane Wyman and popular Milwaukee star Dennis Morgan, were held on Oct. 12.

The new theater had 323 cushioned seats – “as comfortable as your rocking chair” – and a soundproof “crying room” upstairs next to the projection booth for families with unhappy babies. 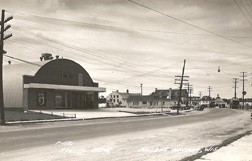 The Lake Theatre as it looked in the 1950s. The Cornerstone Pub is in the background, with the town hall behind the pub. Photo courtesy of the Baileys Harbor Historical Society.

“People had never heard of such a thing,” Ruby Toft says. “Mothers, especially farm women who didn’t have access to baby sitters, thought it was wonderful.” (In later years, that private spot became a favorite of local teens, some of whom recall getting their first kiss there.)

Orville and Elton alternated the jobs of running the projector and selling tickets. At 50 cents for adults, they were seven cents higher than their competition, the Door Theatre on Third Avenue between Michigan and Louisiana Streets in Sturgeon Bay. Lake Theatre was open seven days a week, year round. Three different movies were scheduled each week, with two shows every night.

From the start, the theater drew huge crowds. Mary Ann Johnson, Baileys Harbor’s unofficial historian, remembers going to the movies with her husband and two teenage children and getting a treat afterward at Swanson’s Ice Cream Store to enjoy on their walk home.

“It was a wonderful family evening,” she says. “Lots of lovely memories.” She recalls that the theater made Baileys Harbor a special town. “Everyone went to the movies and talked the next day about what they’d seen.”

In 1950, with the Lake Theatre going strong, Elton and Orville built the Skyway Outdoor Theatre on Highway 42 between Fish Creek and Ephraim. Of the more than 60 drive-in movie theaters that once operated in Wisconsin, Skyway is one of just 10 still in business.

In 1952 they sold the Baileys Harbor theatre to William Bunda Sr. Soon, as more people bought TVs for their homes, movie theater attendance dropped. Over the next 26 years, the cinema had three owners – George Gerdman, Frank Butts and Andy Redmann. Johnson fondly remembers Redmann, who was interested in culture and added art films to the usual bill of first-run movies appropriate for the entire family. 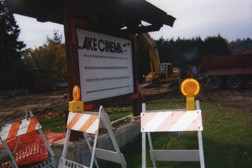 The last remnants of the Lake Theatre are cleared in 2001, when it was called the Lake Cinema. Photo by Carol Gresko.

Suzi Hass of Sister Bay remembers the promo video Redmann made that explained, tongue in cheek, the journey film took to reach Baileys Harbor, carried by a horseback rider, a tugboat operator, an ultralight flyer and, finally, a runner.

In 1984, Redmann sold the theater to Gary Goebel, owner of the Donna Theater in Sturgeon Bay, who would go on to lease the theatre to Tim Suick of Antigo in 1996. By this time, it was only open from Memorial Day to Labor Day, with tickets selling for $3.50.

Although attendance at the Lake Theatre was not what it once was, some movies still drew crowds. (In 1994, this writer’s family assured their visiting granddaughter there was no need to go early to see Forrest Gump – and we still remember the stiff necks that resulted from the 142 minutes we spent watching the movie from the last three seats on the north end of the front row!)

The final film screened at Lake Theatre in the fall of 2000 was Space Cowboys, starring Clint Eastwood, Tommy Lee Jones and James Garner. A year later, Goebel sold the theatre to its next-door neighbor, Associated Bank, for $121,000. Several residents stood by with cameras as the little theater was demolished to make way for the possible expansion of the bank. Ironically the bank – far from expanding – closed in 2009.

Of the 93 Quonset Hut movie theaters that blossomed after World War II, only 19 are still in operation, while many others have been repurposed. The Lake Theatre is one of the 24 that have been demolished, bringing an end to 53 years of dreams on the shore of Lake Michigan.