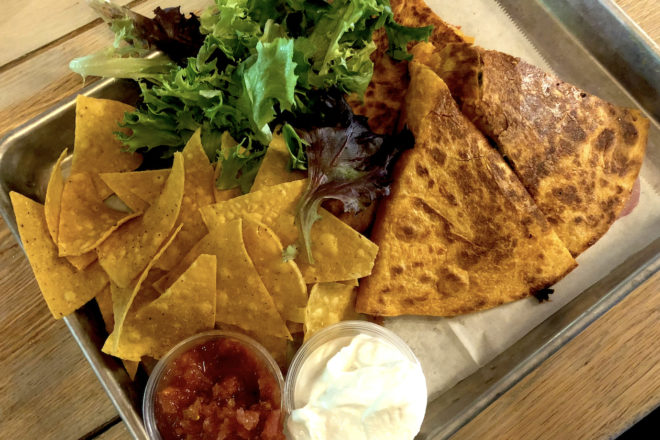 The quesadilla starter was the perfect size for two to share. Photo by Aleah Kidd

Life is a balancing act and the new owners of The Hitching Post have fully embraced that concept as they revamp the classic bar and grill. First opened in 1956, The Hitching Post has long been known as the neighborhood watering hole and hot spot for Friday Night Fish Fry and cheap “tappers.” Through the years the bar and grill has changed ownership and, most recently, names as it came to be The Tin Plate in 2016. Now, the new owners are returning the space to The Hitching Post, but with a new addition of fresh food offerings from Get Real Cafe.

The trio of owners are a brother-sister team, Veronica and Andrew Ripp, along with Andrew’s wife Carolyn Ripp. Veronica has been the owner and chef of Get Real Cafe in Sturgeon Bay for the last four years, offering fresh, organic and vegan-oriented food. Andrew grew up in the area, but was most recently living in St. Louis where he was a swim coach and Carolyn was a teacher and personal trainer. When the bar and grill business came up for sale, Veronica was interested in moving her successful cafe to the location, but was on the fence about making the transition on her own. Fortunately, Andrew and Carolyn stepped in as partners, selling their St. Louis home and moving to the area in order to make the transition a reality.

For Andrew, the draw was the nostalgic feel of the community’s staple restaurant. “Having grown up in the area I have a soft spot for The Hitching Post, and wanted to carry on that name,” said Andrew. The history of the bar and grill is rich with stories of locals who made the “Post” their gathering spot and loyal visitors who returned each year while on their annual vacation to Whitefish Dunes. 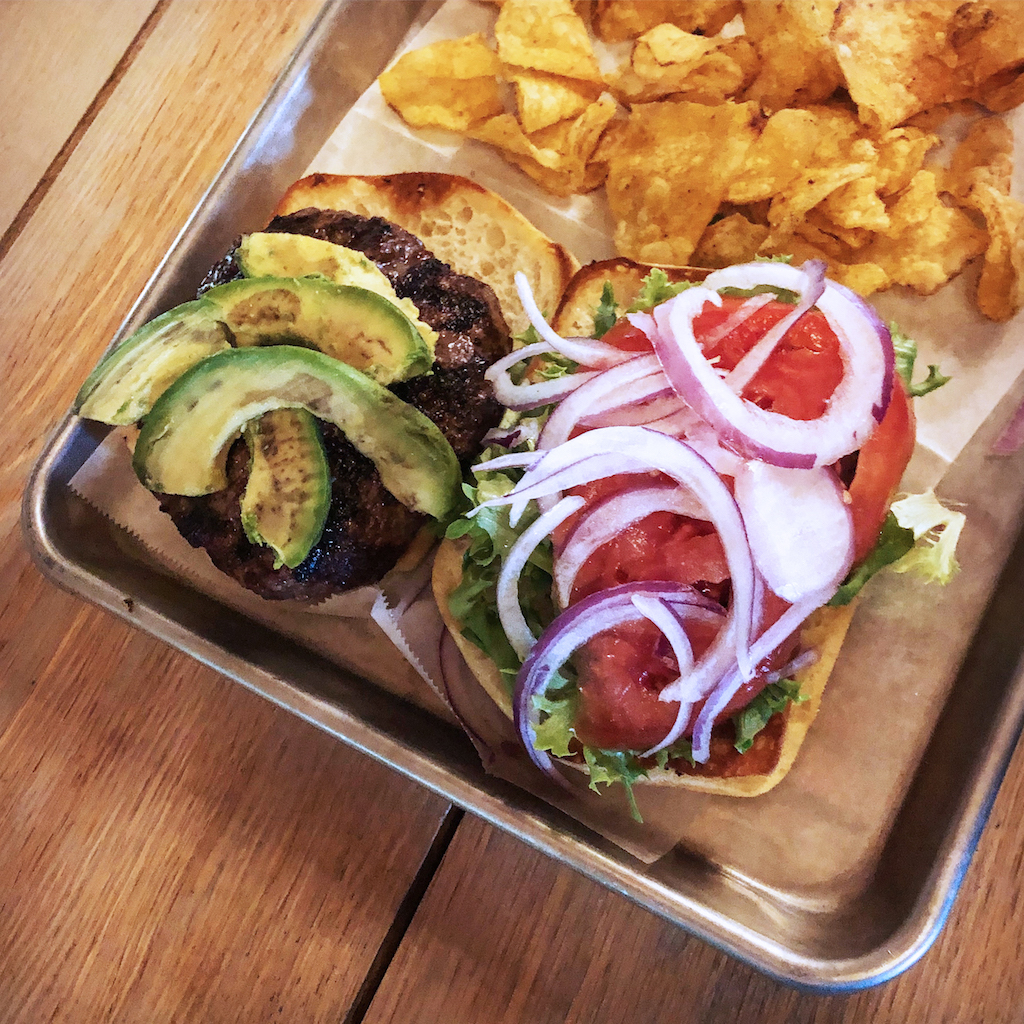 The ½-pound Angus burger comes with your choice of toppings on a ciabatta roll and potato chips.

The challenge for the new owners was finding a savvy way to connect the bar and grill roots with the Get Real Cafe’s approach to food. Veronica turned to one of her popular sayings for inspiration: either something was “for the health of it, or for the hell of it.” Playing with that duality, they were able to build an enticing double-sided menu that features a variety of items that are favorites from the Get Real Cafe on one side — for the health of it — and a selection of bar and grill favorites on the other — for the hell of it.

“We really wanted to approach the menu in a way that provides options for everyone. If you’re craving a hearty cheeseburger or if you are looking for something gluten free or vegan, you can come here for both,” said Veronica. In addition to a full bar and two taps, you can now also order fresh made smoothies and cold pressed juice. It’s a unique approach that aims to serve fans of the classic menu you’d expect to find at The Hitching Post, while also bringing in a new audience from the previous location of Get Real Cafe.

On a busy Saturday afternoon, the dining area and bar was filled with patrons eating lunch or grabbing a drink and appetizer while catching up on college football matchups. A grandmother and her two granddaughters ordered three tuna salad sandwiches on 7-grain bread and on the other end of the bar a group enjoyed a late brunch of bloody mary’s and cheese curds. I opted to sample something from both sides of the menu, going with a Mexican quesadilla to start and then a GRC salad to follow. My lunch date sprung for the ½-pound Angus burger, adding avocado, tomato and onions.

The quesadilla was crispy on the outside and cheesy on the inside, coming with greens, sour cream and salsa. We savored our quarters of the tortilla, quieting our growling bellies while our entrees were prepared. The quesadilla was the perfect size for an appetizer shared between two people.

My salad came and everything was fresh and crispy. The GRC salad is an item that has been featured at Get Real Cafe for some time (hence the name) and has Mediterranean flair. Made of greens, shredded carrots, bell peppers, mushrooms, artichoke hearts, macerated onions, black olives, toasted sunflowers, craisins, feta cheese and sliced cucumber and tomatoes, you’re checking a lot of boxes in the vitamin and vegetable categories. After the cheesy and warm starter, this was a nice way to round out lunch, along with a bite or two of the Angus burger, which was perfectly done.

The Hitching Post will be open year round, daily except Wednesdays, with breakfast and brunch specials served Saturday and Sunday and a special fish fry menu on Friday. Businesses in the Sturgeon Bay area will soon be able to put in lunch orders for delivery. “We had a lot of returning lunch customers from businesses in Sturgeon Bay,” said Veronica, “and this location is a little too far away, so offering a delivery option for businesses is a way we can still serve them.”

Whatever your craving of the day is — for the health of it, or for the hell of it — you’ll find something to your liking at the “Post.” 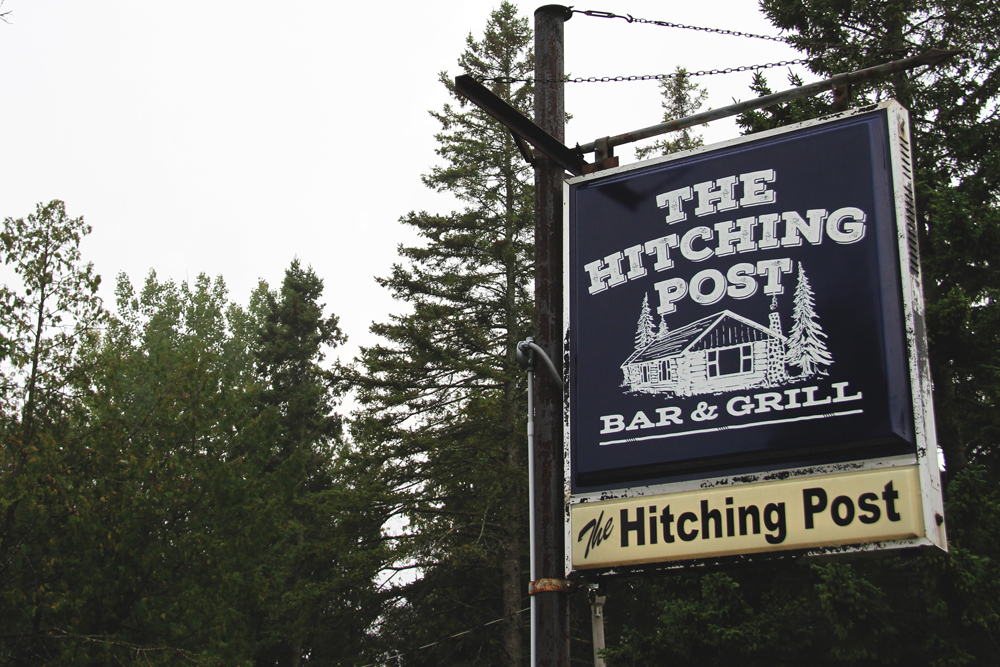