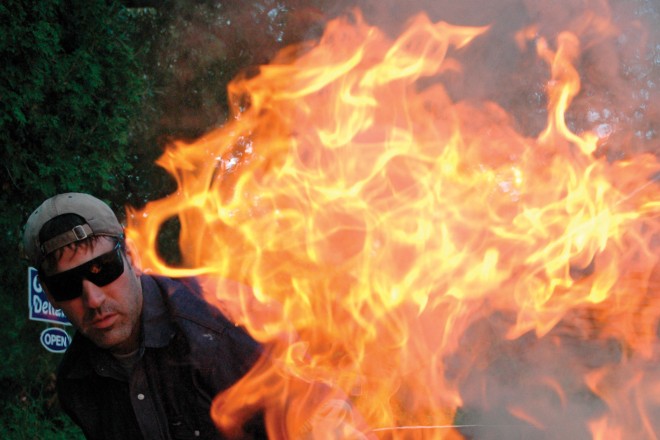 “What do you want to do for the rest of your life?”

This is a rather daunting question for most anyone, usually answered with a wrinkling of the eyebrows and a contemplative “Hmmm,” or with a shrug of the shoulders and simple “I don’t know.”

For those people who actually have an answer to the inquiry, it seems that oftentimes they verbalize it in a reserved way, as if saying the words out loud might somehow taint the possibility of them ever coming true. However, this was not the case for Brian Fitzgerald who by the time he was 18 could proclaim without reservation, “I want to be a studio potter.” Although the path leading to the point in his career where he was living those words was not the most direct nor the shortest, that’s where Fitzgerald finds himself today – an established studio potter in Door County.

Fitzgerald’s connection to Door County, as well as the art world, stems back to his upbringing. His father was an art teacher at a K-12 open enrollment school in St. Paul, Minnesota and Fitzgerald remembers being a young child and spending time in his father’s classroom, delving into all the art supplies. He also recalls “traveling to the country on the weekends for different shows. Whether it was friends of my parents or just artists they liked, we visited a lot of galleries and attended a lot of openings.”

Just as the family would escape the hustle and bustle of the city to explore the world of working artists, they’d leave their life in the Twin Cities behind to spend entire summers in Door County at the family’s retreat in Jacksonport.

When he reached high school, Fitzgerald’s artistic inclination was only encouraged. He attended Alexander Ramsey High School in St. Paul, a school that at one point was ranked the number two high school art program in the country and received a number of grants to maintain its level of excellence. During his freshman year, Brian Fitzgerald’s name was drawn in a lottery for a slot in one of the school’s coveted clay classes.

By the time he graduated from high school, Fitzgerald had entered a number of his pieces in juried shows and was on track to major in art at Mankato State University; however, when he arrived at college, his interests went elsewhere. Fitzgerald thought about following in his father’s footsteps and becoming a teacher or perhaps a counselor, but after suffering a knee injury and no longer being able to run on the school’s track team, Fitzgerald’s direction was altered again.

He transferred to a school in Idaho where he spent a year, then took summer courses at the University of Minnesota before settling down at the University of Wisconsin-Eau Claire. Although majoring in art didn’t seem to be in the forefront of Fitzgerald’s mind, he continued to take pottery classes. Fitzgerald was working toward a degree in sociology and a minor in corporate fitness, but the allure of being a potter continued to resurface.

“The first summer I worked in Door County was when I knew [being a studio potter] was what I really wanted to do.” Being around the art scene and seeing other potters, such as Abe and Ginka Cohn and Jeanne and David Aurelius, made Fitzgerald realize that perhaps his goal was attainable.

Then, when Al Johnson, an employer of Fitzgerald’s for two years, offered to give the small 1920s log cabin nestled in the trees just south of his restaurant to Fitzgerald for a gallery space, he knew it was the right time. Despite the fact that Fitzgerald only had one semester left before he earned his degree, he walked away from school and toward his aspiration to become a working artist. “I owe everything to the Johnsons in getting started,” believes Fitzgerald. “Without that huge break I wouldn’t be a potter.”

In the summer of 1994, after six months of renovations  and preparations, Fitzgerald opened the doors to Sister Bay Pottery. David Caradori, a potter in Eau Claire and someone Fitzgerald considers a mentor, offered up this advice: “If you can get through the first five years, things will start to happen.”

And according to Fitzgerald, Caradori’s words of wisdom rang true. “I went through five years of hard-knock learning on my own,” he recalled. Between maintaining hours at the gallery and working construction, carpentry, or other odd jobs to make ends meet, finding time at the wheel was not the easiest task. It wasn’t until Fitzgerald had struggled through those first five years that he was able to refocus some of his energy on his craft. He used Door County’s strong pottery community as a resource and once again started taking classes in clay.

It was his involvement with a project at the Peninsula Art School in 2001 that Fitzgerald claims to be one of the most influential in his evolution as an artist. A number of Door County potters worked together on this project, which entailed constructing a traditional wood fire kiln under the supervision of Sven Bayer, a world-renowned builder of wood fire kilns, on the property of fellow potter Tad Gilster. Fitzgerald continues to look back on the experience as one of the most positive things he’s ever been associated with. Since then, he finds himself drawn to “wood firing because it’s very pure; the simplicity of it appeals.” Fitzgerald continued, “You really feel a part of the work after splitting the wood, stacking it, loading the kiln, and then stoking the fire every 15 minutes – altogether it’s a five-day process.”

Fitzgerald believes that “anytime you can show someone how, they become more interested in the process,” which is why he started his Raku demonstrations. “It’s something I have been doing for about three years now, but I’ve wanted to do it for ten.” The idea of doing demonstrations was sparked while he was moonlighting as a worker at fishboils. Fitzgerald realized that many of the elements that attract people to this Door County tradition were present with Raku firing, where glowing, red-hot pots are removed from the kiln and then placed in barrels of combustibles such as dried leaves, sawdust, or newspaper. The intrigue surrounding these demos helped round out another element of Fitzgerald’s career.

Fitzgerald’s wife Tracey also played an instrumental role in his success over the years. “Tracey and I were basically engaged and married within the first two years of meeting each other…we’ve been married for eight years, and she’s handled the business side of things ever since.” It was her vision and direction that encouraged Fitzgerald to open a second gallery location. An 1890s log cabin in the Shorewood Village Shops of Ephraim required some fixing up before it was suitable for a gallery and studio space; however, once completed, it allowed the Fitzgeralds to expand the display area for Brian’s pottery but also provided ample room to represent a number of other artists. On Labor Day Weekend of last year, the couple opened Ephraim Clayworks, 13 years after Fitzgerald embarked on his career as an artist in Door County.

“It’s hard to imagine being somewhere else – I feel lucky to be here,” he said about residing in Door County with his family. With regard to his pottery, Fitzgerald finds himself “more energized now than ever before in his life.”

He has reached a point where he can truly call himself a studio potter – all side-jobs have become memories rather than necessities and the finishing touches are completed on his studio and gallery spaces. Fitzgerald is “looking forward to working in the studio this winter, finally having the time be more creative.”

As far as that question about the rest of his life, “[A potter] can’t explore in a lifetime all the opportunities with clay…As a potter, there’s a good chance you’ll work in clay ‘til the end. I don’t think you ever retire – there’s so much to learn and do.”