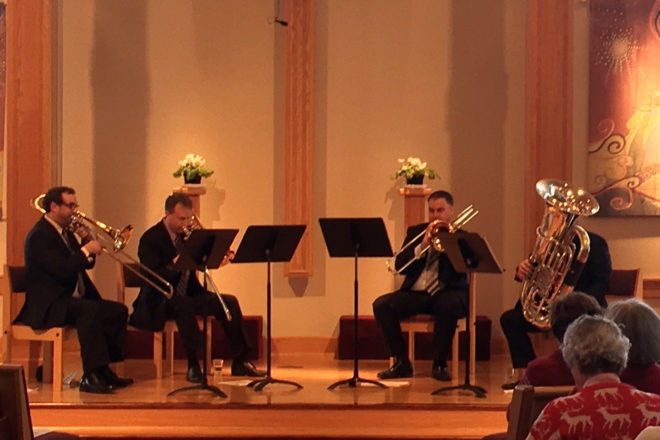 Musician Charlie Schuchat had to laugh when asked for his thoughts on being issued a return invitation following last year’s Peninsula Music Festival February Fest finale.

Fortunately for all involved, the low brass quartet returns Feb. 24 to once again close out the music festival’s annual mid-winter concert series, which began Feb. 10. The program was put together by the featured instrumentalists:  Schuchat on tuba, and trombonists Paul Bellino, Terry Leahy and Bradley Ward.

A significant part of the quartet’s appeal is due to its unusual combination of instruments. Few pieces have ever been written for three trombones and a tuba, requiring this group of musicians to seek out and write their own arrangements.

Last year, the group found trombone quartet compositions and arrangements and swapped in a tuba, resulting in a program of three higher voices and one lower voice. This year, they decided to forego trombone quartets in favor of music written for their combination of instruments, which results in a 50-50 split between higher voices and lower voices, what Leahy described as offering “slightly richer possibilities with the low brass section.” 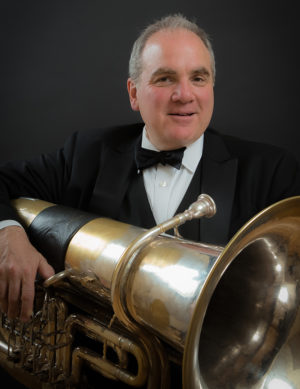 The Feb. 24 program will feature just three original compositions:  Arcady Dubensky’s Concerto Grosso; Jeffrey Reynold’s Skirmish and Dance; and Henri Tomasi’s Etre Ou Ne Pas Être (To Be or Not to Be).

The remainder of the program consists of arrangements carefully selected or created with instrument and performer in mind.

“The main difference is finding things that will work because the trombones obviously stick straight out and have a very direct sound whereas the tuba points straight up and has more of an indirect sound which resonates in a hole,” trombonist Leahy said.

“When brass players do a performance, we not only have to take into account what journey the audience takes on, we also have to take into account physical issues as well,” he added. “We can’t do all of the heavy, very technically demanding stuff all together on one half. We have to spread it out so our physical endurance of the embouchure – that’s the muscles in the mouth that we use to play instruments – the physical demands of that aren’t too much at one point.”

“We’re very carefully pairing them with some really popular tunes by Beethoven and Mozart and Bizet and Dvorak,” Schuchat said. “It’ll be really familiar music in a very unusual setting with the low brass and then some very unfamiliar music but with that same ensemble. It will really be an exploration of all the things we can do.”

The ensemble will close the 2018 Feb Fest series with a low and brassy take on the popular ‘60s song, “Working My Way Back to You,” written by Sandy Linzer and Denny Randell, and made popular by The Four Seasons in 1966 and, in 1979, The Spinners. The Feb Fest version was arranged by Brian Mahany, who also arranged last year’s popular Bee Gees closer, “How Deep Is Your Love.”

The concert begins at 2pm on Saturday, Feb. 24 at Shepherd of the Bay Lutheran Church in Ellison Bay. Tickets are $25 general admission and $5 for children and students. For more information visit musicfestival.com.