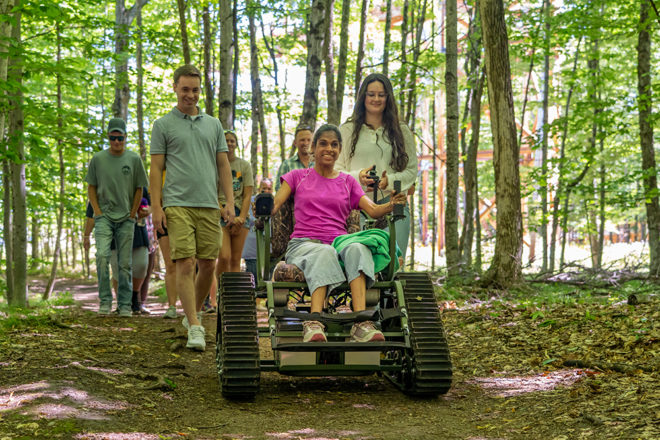 Adam Peronto (left) of Kinect M1 walks with Tiffany Leist as a friend pilots the trackchair down the Sentinel Trail in Peninsula State Park. Photo by Rachel Lukas.

As Tiffany Leist manipulates the joystick on the Action Trackchair, the tank-like rubber treads roll her over the roots, rocks and undulations of the Sentinel Trail in Peninsula State Park. These seemingly minor obstacles have made hiking in the woods a dangerous endeavor for most of her 35 years, but today she makes her way down the trail a few steps away from the crowd at the base of Eagle Tower and into the peace of the woods.

A broad smile spreads across her face, and for a few rare moments, Leist is speechless – lost in the woods in an experience that most of us take for granted every day.

“I get tired really fast,” Leist said earlier when explaining her struggle to enjoy the outdoors in this way. “I can’t keep up. But with this I can go several miles instead of being made fun of.”

Leist was born with cerebral palsy, a group of disorders that affects a person’s ability to move and maintain balance and posture. When walking for more than a few minutes, her knees pop out of place, her hands stiffen up, and sometimes a mind fog sets in. It brings silent stares and smirks from people who think they’re disguising them from her, or from those who don’t even try to hide them.

But Leist is a talker who will let you know what she thinks and feels. She said she wishes those people would simply ask the questions she knows are on the tip of their tongue.

“It’s easier to talk about it than to have them stare at you and try to figure it out,” she said. “Nice to tell them because you want to be a human being like the rest of you. I just want to be treated as a human being.

“I like to let people know if I struggle. Sometimes I get stared at; it’s because they’re interested. People need to know what I’m struggling with. I’m not afraid to tell people what this is,” she said, motioning toward her legs.

Today, though, she’s getting stares for a different reason as she drives what appears to be a miniature tank up the 850-foot ramp to the top of Eagle Tower. The Action Trackchair is an adaptive, powered wheelchair that gives people with mobility challenges access to trail systems. It’s provided by Kinect M1, a community consulting organization based in Green Bay that aims to connect diverse populations to outdoor opportunities.

“It can go over logs, over rocks, up and down terrain,” said Adam Peronto, the executive project director of Kinect M1. “A person can get way out in the woods in this thing, where they couldn’t before.”

The $15,000 chair was acquired with the help of a grant – one of five awarded nationwide – from the Centers for Disease Control and Prevention Foundation. Peronto now hopes to give it a permanent home at Peninsula State Park so that it will be available for more people to use to access trails that have long been no-go zones.

The aim is to build a home for the chair near the Nature Center, where people with disabilities could check it out for use on the trails, and negotiations are continuing with the park and the Friends of Peninsula State Park to make that possible. The chair requires a storage area, charging station and volunteers to meet with users to give them access to the chair.

Since April, Peronto has been taking the chair to various venues for use by school groups and people from Sunshine House and Turning Point.

The Action Trackchair will be at The Ridges Sanctuary, 8166 Hwy 57 in Baileys Harbor, on Tuesday, Nov. 8. Visitors may observe and use the chair, 1-4 pm.

“It’s incredible to see people experience it for the first time,” he said. “People are in tears. They’ve never been on a trail before, or down a beach, or deep in the woods. It’s opening new doors for these people.”

Peronto loves being outdoors himself, hiking and backpacking. Working with Kinect M1 has opened his eyes to the challenges that many people face trying to do the things that come so easily to him.

“Unless you’re the one living it every day, it’s really hard to think of everything a person with a disability encounters every day,” he said.

Peninsula would be the first state park in Wisconsin with the chair, and one of only a few in the country. Peronto said Michigan and Colorado are the only states that have them currently.

The chair would be the latest step in a rapid transformation toward accessible activities on the peninsula. Eagle Tower is the most visible example, but strides have also been made in recent years at Otumba Park and Egg Harbor Beach, with the expansion of the boardwalk at The Ridges Sanctuary, and improvements at Third Avenue PlayWorks and the Nicolet Beach playground.

Venues, schools, municipalities and businesses are increasingly recognizing that providing accessibility to everyone is something other than a burden. It’s a message that Damian Bookman, founder of the Ability Center in Milwaukee, has been pushing for years.

“We’re all temporarily able bodied,” Bookman said. “The need for greater access is inescapable for all of us.”

Nearly everyone will grapple with physical limitations at some point in their lives – a torn Achilles, a broken ankle or leg, a herniated disc, a hip replacement. As we age, those limitations become more intrusive in our day-to-day lives. Balance, vision, hearing and fitness will all decline for most of us as we age. For some, a slight change in the elevation of a sidewalk, curb or small flight of stairs will become a challenge.

Bookman speaks from experience about the challenges that those with disabilities face in trying to fit into a world built without them in mind. He was diagnosed with cancer in both knees as a child and has undergone more than two dozen procedures.

“The largest loss is when we often can or can’t do something based on that person’s ability,” Bookman said. “I’m a father to three kids. I don’t want to stop them from being able to do things because I can’t.”

Though there’s a long way to go, he said he’s witnessed a sea change in thinking during the past five years, driven in part by the Diversity, Equity and Inclusion (DEI) movement.

“It started with a focus on racial and gender inclusion, but our community said, ‘What about us?’ What’s powerful is that people have come with a much more heartfelt approach,” Bookman said. “We have grown to become – consciously as a society – more inclusive. It’s coming back to civil rights and disability rights once again.”

It’s a fight that many thought had ended with the passage of the Americans with Disabilities Act (ADA) in 1990, but as Bookman talks about the ADA, he gets frustrated.

“The Americans with Disabilities Act provided us with legal access, but it has a lot of language that gets people out of having to be compliant,” he said. “ADA compliant is access, but it’s not inclusion. Once you can get in the door, what opportunity do you have? Do you have an equitable opportunity that is of value to you as it is to able-bodied people?”

Bookman recognizes that complying comes with costs. Providing wheelchair access might require redesigning an entryway or sacrificing square footage for a ramp. Bathrooms that once were the size of a broom closet must be larger, and parking must be reconsidered.

“The ultimate goal is doing it right from the day you open,” he said. “Take a moment to pause and think about, how does this work for everybody? You have to look at it as an investment. If we are an aging population, then every business should want to serve that demographic. If you can’t serve the individual with a disability, you’re not going to serve the people they’re surrounded with. It’s got to be looked at not as a financial burden, but as an investment. How am I going to serve them from birth to death?”

Rebuilding Eagle Tower with an 850-foot ramp added millions to the cost of the project, but the tower has never been more popular, driving so many visitors to the park that improved parking is now in the plans to handle the crush. Superintendent Eric Hyde said it’s conceivable that the increase in the sales of day and annual park passes – driven by the tower – could ultimately pay for the cost of the tower.

If the first two years since the tower reopened are any indication, it just might. But there are other payoffs as well.

As the sun beamed down on the tower Aug. 8, drivers helped Leist guide the Action Trackchair up the ramp, turning the final big bend to the top of the tree canopy as blue sky opened before her. Once at the top, she climbed out of the chair and made her way to the edge to look down and shout to her friends 60 feet below, flashing two thumbs up and a wide smile.