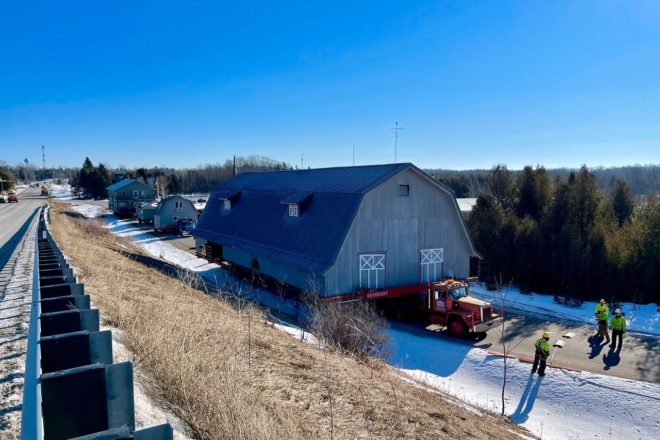 The Little Sister Resort barn and more than a dozen other cabins and buildings from the old resort are now resting near their new homes throughout northern Door County.

The barn was the lead in a parade of four buildings moved Tuesday off the former Bay Ridge Golf Course property, across Highway 42, down Country Lane, and finally over and up Highway 57. DeVooght Houselifters of Valders coordinated the complicated, months-long effort that will eventually create a new history hub for the Sister Bay Historical Society (SBHS), and nearly two dozen workforce housing units for Paula Anschutz.

“This is Christmas to me,” said Robert Jischke, a member of SBHS and Sister Bay native who is proud to have played a part in saving the barn.

The move began before dawn as workers prepped joists, jackhammered stop signs out of the ground, and temporarily disconnected power lines to snake the barn and an even taller two-story home across the highway and around three 90-degree turns.

“It’s not the most difficult project I’ve done, but it’s tricky,” said David DeVooght, who also moved the Sturgeon Bay Granary across the Maple Street Bridge. Workers not only dealt with power lines, but also trimmed tree branches along Country Lane. The barn stretched its wide shoulders and 110 tons over the ditches along the road, held together by a maze of chains wenching it in place atop steal I-beams.

For Anschutz there is much work to be done before the buildings become occupied homes. For the historical society a long fundraising campaign is ahead to raise money for the effort to resurrect the barn for its new purpose. But a long-awaited first step is complete, and a piece of Sister Bay history now rests at the doorstep of the village along Highway 57.