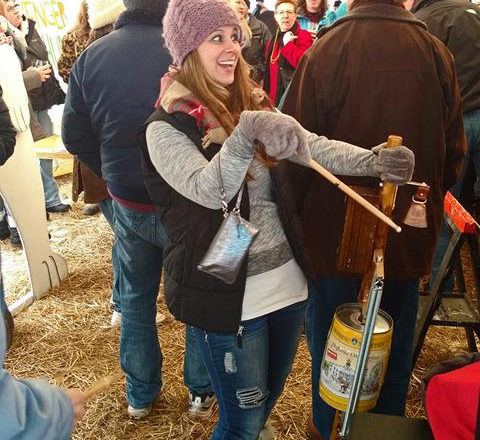 Practice your stumpf fiddle playing this weekend at Winterfest.

Don’t let the name fool you. Although the stumpf fiddle – sometimes called a polka-cello, bumbass or hum strum – melds percussion and string instruments, it is in no way a fiddle.

Most commonly, the homemade instrument consists of door springs for strings, a pie tin, horns and any other noisy adornments the maker fancies. And although all the bells and whistles might give the quirky instrument an intimidating appearance, it’s relatively easy to play: Just bounce it on the ground and strike the various components with a stick.

Stumpf fiddles are fairly easy to make, too.

“Generally, people make these instruments out of whatever they can find around their house,” said Bob Spielman, who “tunes up” the stumpf fiddles each year in preparation for Fish Creek’s Winterfest competition. “Really, anything that you can find and attach that makes noise.”
Pans, cans, bells, washboards – they’re all up for grabs. And although there’s no wrong or right way to make a stumpf fiddle, they generally include a few key parts.

1. Stick: A walking stick or an old broomstick works – nothing fancy here.

3. Bell: Any type of bell will do, but cowbells are a popular pick.

4. “Strings”: A pair of door springs is a common choice.

5. “Tambourine”: This is generally an empty coffee can or pie tins filled with something that rattles, from dried corn and beans to metal nuts and bolts.

6. Beat stick: This is usually a drumstick that’s used to strike the various parts of the stumpf fiddle, preferably in time with the beat.

7. Sleigh bells: Add some jingle and jangle to the rhythm.

8. Tennis ball: A tennis ball, or sometimes a rubber ball, is attached to the stick, creating a base with just enough give to bounce the instrument.7. Sleigh bells: Add some jingle and jangle to the rhythm.