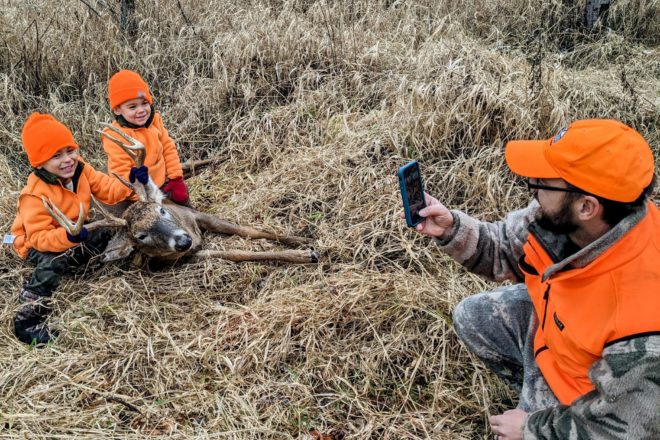 Casey Bins of Casco captured this moment as sons Beau and Brooks posed with a 10-point buck that he shot near Algoma on Nov. 22. It was one of the more than 4,000 whitetails taken during the nine-day gun deer hunting season in Door and Kewaunee counties. With the bow, crossbow and youth gun hunts added in, about 6,000 deer have been harvested from the peninsula this season. Those numbers will continue to climb as a number of hunts are still ongoing or coming up. Photo by Kevin Naze.

Door and Kewaunee County deer hunters combined to register 4,179 whitetails during the nine-day gun season that ended Nov. 27 – up slightly from last year, but about 450 fewer than the five-year average. Combined with the early bow, crossbow and youth gun season totals, hunters have registered about 6,000 deer so far on the Kewaunee/Door peninsula.

That number will continue to climb. The 10-day muzzleloader hunt ends Dec. 7, but it’s immediately followed by a four-day, antlerless-only gun deer hunt. After that, it’s back to camouflage for bow and crossbow hunters before nine more days of blaze during a holiday antlerless gun deer season Dec. 24 – Jan. 1.

At a virtual media briefing Tuesday morning, Jeff Pritzl, a deer program specialist with the Department of Natural Resources, said the preliminary nine-day totals statewide were 203,295 deer taken, including 98,397 antlered bucks. He expected the numbers to rise by a thousand or two as additional registrations trickle in from those who did not register by 5 pm on Nov. 28.

Statewide, the total harvest was up 14.4% over last year and 7.7% over the five-year average. The biggest increases were in the Northern and Central Forest zones.

April Dombrowski, chief of the Department of Natural Resources’ Recreational Safety Section, said there were eight shooting incidents during the nine-day hunt, including one fatality. Six, including the fatality, occurred during opening weekend.

Four injuries – three bullets to the feet or leg involving long guns, and one a bullet to a finger involving a handgun – were accidentally self-inflicted.

Three other incidents, including the fatality, involved members of the same party. The fatality happened while a hunter was unloading a firearm in the back seat of a vehicle. The other same-party incidents took place during a deer drive, and in a ground-blind-to-ground-blind shooting.

Just one incident involved two different parties. It took place during a deer drive on public land in Jefferson County when one of the drive participants shot at a running deer and hit a hunter – who was on adjacent private land sitting in a ground blind – in the thigh.

Overall, Dombrowski said, hunting is a safe activity in Wisconsin. The past 10 gun seasons have seen an average of 6.4 incidents per year, or about one per 90,000 participants.

Still, she reminded hunters to heed the rules of firearm safety, especially controlling the muzzle.

“Load the mind before loading the gun,” she said.

“It’s mostly tied to just the demographics of the hunting population, and this is a phenomenon that’s been going on across the country,” Pritzl said. “As the baby boomer generation is aging out of deer hunting, they’re not being replaced at the same rate that they’re leaving.”

The growth of crossbow hunting has offset some of the gun-sales losses. Including bow and crossbow license sales, the combined total of license sales stood at more than 795,000 – down 1.6% from last year’s 808,000 during the same time period.

Despite the decline, Eric Lobner, director of the Department of Natural Resources’ Wildlife Management Bureau, said hunting is about a $2 billion industry in Wisconsin.