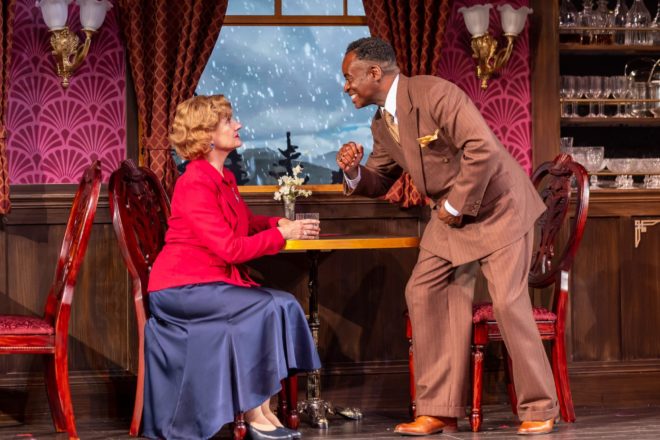 What actors do in the off-season

As the leaves turn their autumnal hues and visitors head back home, the stages of many local theater companies go dark until the following summer. But the actors who light up those stages stay active and creative throughout the off-season, whether they leave along with the tourists or hunker down in Door County for the winter. Find out what some local favorites have planned.

After stepping off the stage as H.C. Curry in Peninsula Players Theatre’s summer show The Rainmaker, Blake headed to Illinois, where he’s playing Monsieur Bouc in Drury Lane Theatre’s Murder on the Orient Express.

Next, he’ll haunt the stage of Indiana Repertory Theatre as the Ghost of Christmas Present in A Christmas Carol, and after that comes a role he said he’s “excited but terrified” for: playing Dr. Martin Luther King Jr. in Actors Theatre of Indiana’s production of From the Mountaintop.

Blake’s busy schedule doesn’t allow for much free time, so he must schedule it in, blocking off a few weeks at a time to “do nothing.” His favorite way to do nothing is to play with his pandemic dog, a four-year-old lab mix named Bradley.

Over the past 40-or-so years, Moede has acted with every major theater company in Door County, and this heavy involvement in the local theater scene means he doesn’t have much of an off-season.

Instead, he fills his winter months by planning for future performances and play readings. Often, that means poring over scripts – especially lesser-known ones – to find plays that might work as future productions in Door County.

When he’s not working, Moede likes to fly-fish and catch up on all the chores that get pushed aside during the busier parts of the year, especially at his other job at Plum Bottom Gallery. Soon, he’ll be accompanied by a rescue dog, which he plans to adopt soon.

In addition to acting as Irene in Slow Food at Third Avenue PlayWorks (TAP), Morkin supports TAP behind the scenes all year long as a board member. She also serves as a County Board member, doing what she calls the “Door County shuffle”: juggling different responsibilities throughout the year because there are different opportunities during the tourist season and the off-season.

When she’s not at a board meeting, Morkin has a jazz band in Milwaukee, where she sings and plays a bit of guitar and ukulele. She wants to start a similar band in Door County because she misses performing, and recently, she’s noticed that “Door County is starting to embrace jazz more.”

After starring in two Northern Sky Theater shows this summer – Fishing for the Moon and Love Stings – Campea is heading to the Actors Theatre of Indiana, where he’ll play Leroy and the radio soloist in Violet. Then he’s spending the rest of the year with his family, which is expecting some “new additions” soon.

Once he meets the newcomers, he’ll head back to Chicago, hoping to find an apartment and “hit the ground running” with his acting career. And when the dust settles, he might unwind by rewatching Jane the Virgin on Netflix with his cat, Bruce.

Ensign last took the stage in 2019, playing Margaret Page in Door Shakespeare’s production of The Merry Wives of Windsor. Though it’s been three years since she was onstage, she has hardly stepped back from the Door County theater scene.

Ensign is the producing artistic director for Door Shakespeare, and she’s hard at work on next year’s budget, figuring out fundraising strategies and bringing together a construction team for the 2023 season.

She’s also the theater director at Sevastopol High School. At the time of her interview, the cast list had just been released for the upcoming fall play: a Harry Potter parody called Puffs, or Seven Increasingly Eventful Years at a Certain School of Magic and Magic.

Though much of Ensign’s schedule is devoted to getting other actors ready for the stage, she also makes time to do the same for herself, working on audition pieces and sending out résumés.

“As a working actor, that’s always on your to-do list,” she said.

After acting as Anthony, a high-spirited high schooler in Peninsula Players Theatre’s I and You, Thomas felt ready for a heavier role. He found such a role in Remy Bumppo Theater Company’s Routes, in which he plays Kola, a young man who’s struggling against England’s immigration system.

Whereas Anthony was a “sweet student-athlete,” Thomas said Kola is “more of a bully” who takes out his anger at the system on other people. Though the two roles are polar opposites, Thomas said his time as Anthony helped to inform his portrayal of Kola because both characters are young men who are trying to find meaning in the world.

Though Clemons said he never thought he “could get artistic fulfillment from anything besides performing,” his recent experiences with writing and directing plays have enriched his perspective as a performer. His last onstage role in Door County was Bill Zapper in Northern Sky Theater’s Love Stings, and now he’s the assistant director of Third Avenue PlayWorks’ Birds of North America.

When that show closes, he and his partner will go on a “long overdue” vacation, and then Clemons will start work on his first project as a full director: a Golden Girls parody performed by drag queens at a Milwaukee restaurant, Hamburger Mary’s.

In the spring, he’ll return to acting by playing Squidward in First Stage’s production of The SpongeBob Musical. The role requires a surprising amount of tap dancing, and though Clemons has dance experience, tap is a “different beast,” so he’s taking lessons from a private coach to prepare for the role.

Perry was introduced to Shakespeare in fourth grade, when her class put on a three-minute version of A Midsummer Night’s Dream. She’s been hooked on the Bard ever since, so when she was cast as Kitty in Door Shakespeare’s The Three Musketeers: An Adventure with Music and as Miranda in The Tempest, she was ecstatic.

Though The Tempest closed in late August, the Milwaukee-based Perry stuck around in Door County for another month to work at her day job and spend time with her newfound friends here.

Before she moves back to Milwaukee, she’ll head to New York for a few weeks, where she’ll serve as the understudy to Mrs. Claus in First Stage’s Rudolph the Red-Nosed Reindeer: The Musical.

When she’s not busy working on her performance art, Perry works on visual arts: sketching, painting and making ceramics.