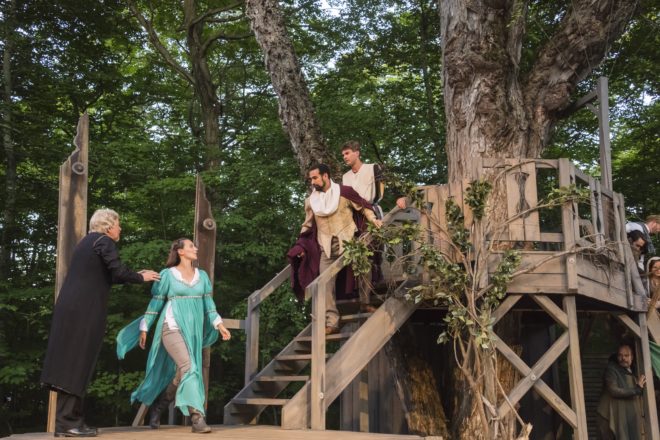 The towering oak tree in the center of Door Shakespeare’s stage is a welcome element in the theater’s productions. Photo by Len Villano.

There are many theaters and troupes that perform on Door County’s stages and there is little they have in common, including the look and feel of each set design. But they do all share the same tenet of set design: serve the performance.

James Valcq, co-artistic director at the Third Avenue Playhouse (TAP), took quite a literal view of that tenet since he arrived at the theater in 2011.

“If it is not referred to, touched or utilized it’s not going to be on that stage,” Valcq said. He has walked that statement back a little bit through the years. Actors in the theater’s 2018 opening show Stella and Lou don’t actually drink from the dozen bottles of liquor on the stage. But the concepts and construction of Door County theaters’ sets share that common thread.

“You might have something that is visually beautiful, but does it serve the story in the sense that it helps move the story along?” said Scott Boyle, professor at the University of Minnesota — Duluth’s Department of Theater and former technical director at Peninsula Players Theater.

Boyle mentioned the 2014 production of The Tin Woman, where a big tree served as the background to the set and the tree’s reflection discreetly resembled arteries branching out from a heart. The concept subtlety complemented the main plot — a donated heart transplant.

In many productions, subtlety is key.

Ed DiMaio, master carpenter for TAP,  said he tries to avoid creating a set that acts like another character. He would rather leave the acting to the actors. 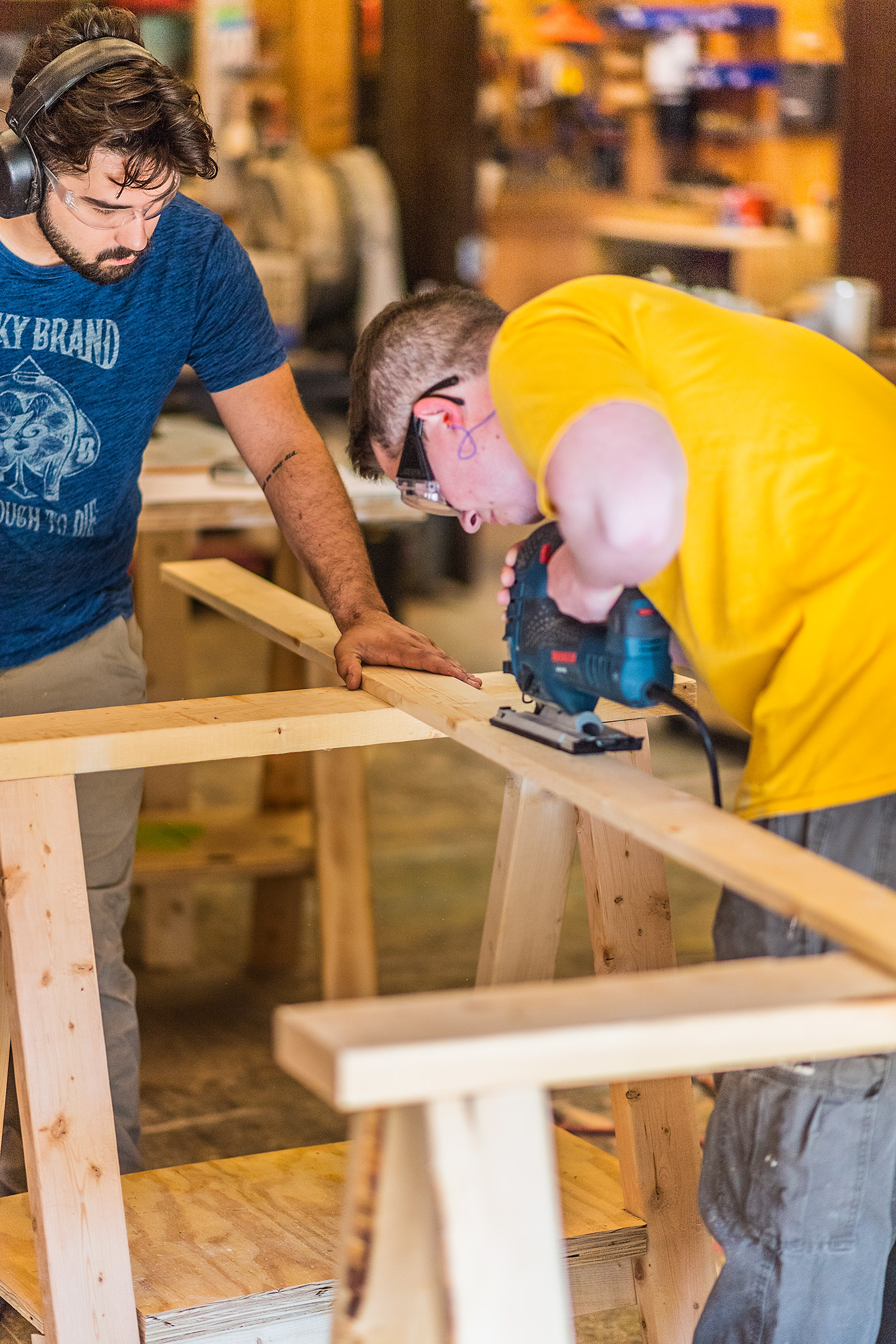 The facilities at Peninsula Players Theater allow the company to create grand sets for its large space. Photo by Len Villano.

“We usually choose to engage actively the audience’s imagination and not representing on stage everything visually that they would see in their mind’s eye,” Valcq said. He pointed to the theater’s run of Candide, which takes place at exotic locations around the world. TAP pulled it off with little more than a few black boxes against a black backdrop. If a character comes out wearing a ballgown and speaking French, then they are in a Paris ballroom, said Valcq.

Of course, a theater such as TAP doesn’t always have the choice of large intricate sets. Valcq and DiMaio embrace their minimalist design.

“I see the limitation as a really great challenge,” Valcq said. “We have to think outside the box because there is no box.”

Every theater’s physical space comes with its own challenges and assets.

At Door Shakespeare, Björklunden’s tapestry of birch trees serves as the backdrop and a towering oak marks center stage. While the set is beautiful, it is also inflexible. They can’t hang a backdrop of an ocean or fill the audience’s perspective with King Henry’s extravagant chambers.

“In a way, it brings us back to the roots of Elizabethan theater because there weren’t scenic elements,” said Jody Sekas, scenic designer for Door Shakespeare’s 2018 season. “Everything the audience needed to know was indicated in the dialogue.”

In the open air of Northern Sky Theater in Peninsula State Park, sets must be designed with the elements in mind.

Stewart Dawson, master carpenter with Northern Sky, said his sets are broken down and stored every night, sometimes twice in one day for a double bill.

“Everything gets built as if it were a tour and something you could pack in a truck and set up in a moment’s notice,” Sekas said.

DiMaio echoed the need for flexibility with a set’s construction materials.

“The funny thing with sets is it’s all screws because you have to take it apart. There’s no hammers,” DiMaio said, explaining the difference with building something like a house. “There’s a higher degree of functionality because if you do anything in a house it’s all aesthetics. I’m always looking at structure… somebody is going to sit up and now jump on this table and we have to make sure that table can stand that how many times for three weeks.”

Door County’s set builders are generally underappreciated. Audiences see little more than a small line of credit in the playbill. But the designers also act as a check to the occasional overzealous artistic director. What looks good as a conceptual design can fall apart when the drill meets the screw.

“When the designer hands in the design and leaves I think there’s often the, ‘Yeah, it’s wonderful, but how?’” said Valcq.

Boyle said elaborate scenes that need to be moved onstage between scenes can take so long to set up, they can create a break in the action and dilute the performance. 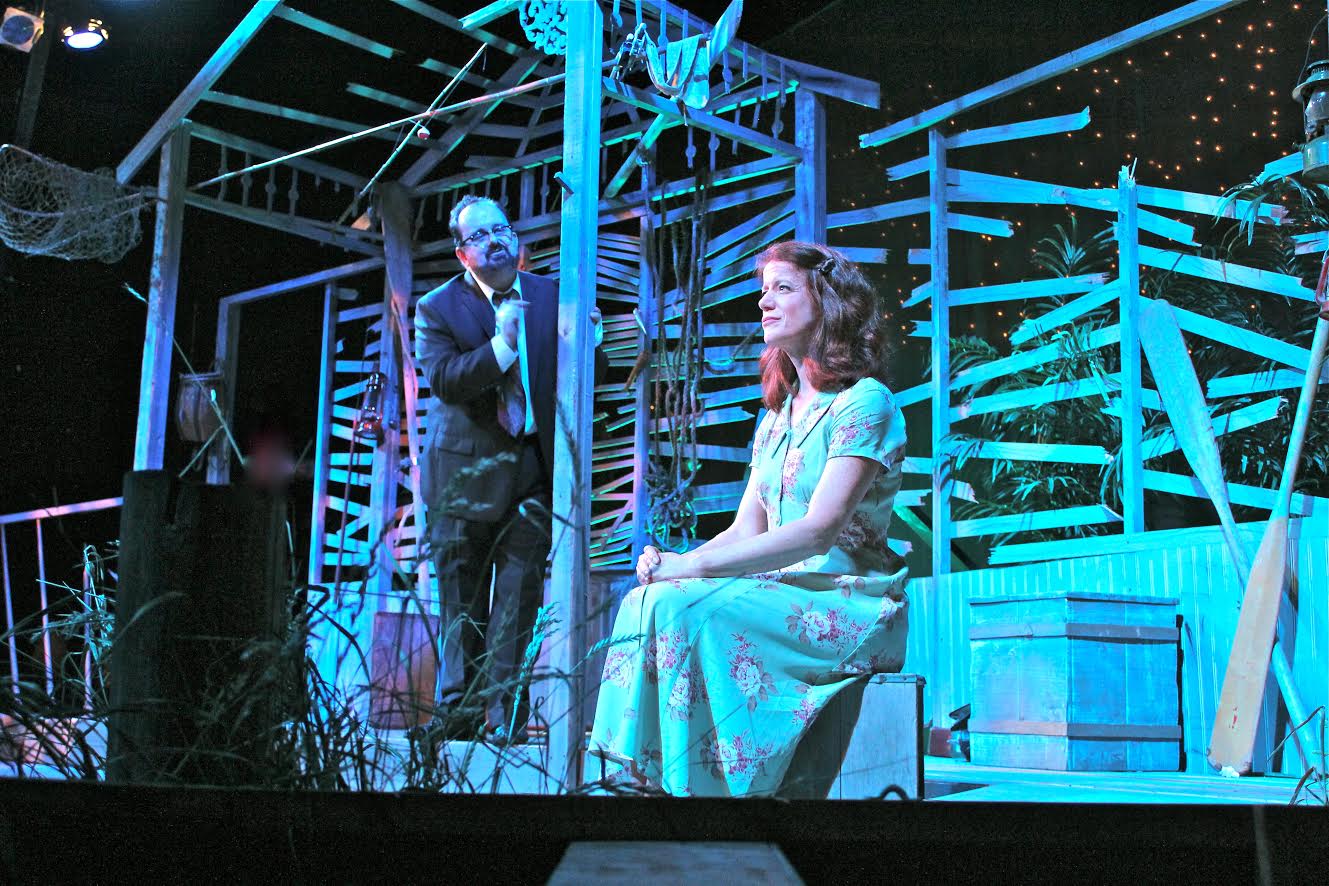 Valcq’s design for Talley’s Folley, which was one of the most elaborate design’s ever undertaken at the Third Avenue Playhouse, was nominated for a Broadway World Award for Best Scenic Design. It featured a dinghy that appeared to float in a marsh thanks to a few used hotel mattresses. Photo by Steve Allen.

“The time that gets eaten up in all those transitions makes for a long evening,” Boyle said.

In Peninsula Players’ 2015 production of Outside Mullingar, an elaborate kitchen set needed to be moved onstage in the middle of the performance.

“That show was written without any breaks,” Boyle said. “There’s no intermission to do this shift. We had to design it in such a way that the action would not stop.”

They ended up shielding part of the stage and setting the kitchen up behind the curtain while the action continued.

No matter how elaborate, beautiful or inventive a set design is, deconstruction begins as soon as the curtain drops on the last performance of a show. Some pieces get repurposed for future shows and others are tossed out or given away.

When Valcq and the small crew at the TAP began taking down the award-winning backdrop to Talley’s Folley, some lamented deconstruction of such a beautiful set. But Valcq, DiMaio and other theater veterans have little time for that sentiment.

“That’s theater,” Valcq said simply. “The shows come and go. You put it up and you take it down.”