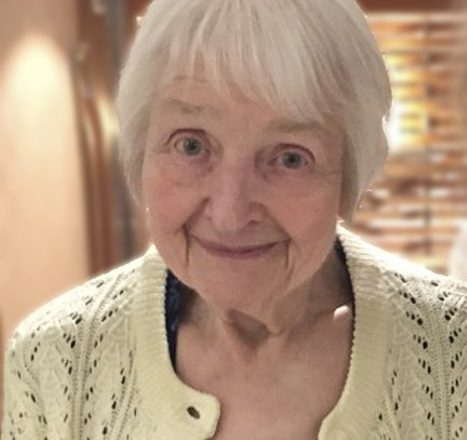 Thoreson delivered this eulogy during the Nov. 6 memorial service for Carol Newman, 83, who died Oct. 28. It’s being published here in its entirety with permission.

We’re all here today to celebrate the life of our friend, Carol Newman. Now, Carol wasn’t very big in stature. She was quite soft spoken. We didn’t often see her outside of the Pioneer Store.

It was, for the most part, her domain, her world. And yet, her influence extended well beyond those four walls, and was, in fact, felt so strongly by all of us that we have come together here today to honor her, and to share our sadness of her passing.

Many of us are transplants here, having come from someplace else – some recently, some many years ago. One common experience we have all had is that we have discovered the Pioneer Store, and then had to figure out what, exactly, it was. It’s more than a general store or convenience store, that’s for sure. It’s our community center – a clearinghouse for local information. It’s the heart and soul of our little town. It’s the place you can get a quart of milk and a weather report, a loaf of bread, and find out how so-and-so’s hip replacement went.

For years and years, the Pioneer Store was open until 10 o’clock, six nights a week. Sundays they closed at 6. Now, this wasn’t because Lester [Carol’s husband of 37 years, who died in 1993] and Carol were trying to squeeze the last sale out of every given day. It’s just how they took care of their neighbors. As steady as the North Star.

If you’d get home at 9:30 pm from this or that, the Pioneer Store would be open, and even if you didn’t need anything, it was a good feeling just knowing it was there keeping vigil. Lester and/or Carol were always there. Their workload was staggering, but onward they went.

When Lester retired from teaching, everyone thought that he and Carol would eventually get to enjoy a nice, long retirement. But that was not meant to be. Only a few years after Lester retired, he suddenly died. Carol, of course, was devastated. I remember her telling me, when I offered my condolences, that Lester was her best friend. That broke my heart.

The whole town worried about how Carol would ever go on, knowing the huge amount of work it took to run the place. But Carol did what Carol always did: She went forward. She did what had to be done. She took care of all of us who depended on the Pioneer Store. And always without an ounce of self-pity or woe-is-meism. She simply did her work and carried on.

Over the next few years, the hours were cut back some, but little else changed. Then the unthinkable happened. In July 2006, in the middle of the night, a gas explosion blew up a cottage in Cedar Grove, taking the lives of two guests staying there, and also blew up the Pioneer Store.

The explosion nearly jolted us right out of bed. I grabbed some clothes and flew out the door to see what had happened. I couldn’t believe what I saw in front of my eyes. I ran over to the burning cottage and then to the Pioneer Store. By this time, my wife, Judy, had made her way to the store. She said to me, “Carol’s in there. We have to do something.”

Just then, the first fire truck came flying down the hill from Sister Bay. We flagged it down and said, “There’s a woman in there,” pointing to the bedroom window. Having lived in Ellison Bay for so long, we knew which light in the upstairs residence was the last to go out each night.

They shot a ladder up to the second-floor window, and some anonymous local hero flew up the ladder, pulled the screen off the window and disappeared inside. It seemed like time stood still. But the next thing we saw was Carol, fully clothed, backing out of the window and climbing down that ladder.

Like a phoenix rising from the ashes, Carol descended from the wreckage. It was a transformative moment. In the midst of all the chaos, in the wake of this terrible tragedy, a miracle had taken place right before our eyes. Though badly shaken up, Carol was alive and well. No matter how tragic something may be, hope can sometimes triumph.

The next few days were a blur. This community wrestled with grief at the loss of two souls visiting our little town. The Pioneer Store – our community heart and soul – was blown to bits. The road was closed, and investigators were poring over every inch of the town, trying to piece together what had happened. Nobody really knew what the future held for our town.

I looked out the front window of our shop one morning at the closed road and saw Carol making her way up the street. About that time, I heard a motorcycle rolling into town from up 42, and realized it was Carl T. Carlson – another hometown hero – on his Harley.

He and Carol rendezvoused at the barricade. Being a lifelong snoop, I watched the two of them, mesmerized. They both looked at the wreckage of the Pioneer Store. They were gesturing to each other, talking back and forth, and I felt as though I was witnessing a plan being hatched. The net effect was very calming and encouraging.

Once the demolition had been completed and the site had been cleared, Carl T. and his crew went to work rebuilding the Pioneer Store. Many times during the next few months, I’d invent a reason to take a walk that would take me past the construction. I loved watching Carl T. and his boys work on that building. It seemed as though they’d been born to do this job. They worked with an intensity that bordered on reverence. That vibe that was being built right into that structure. It almost felt like they were building a church or a temple.

In less than one year, the Pioneer Store was finished, and a dedication ceremony was planned. It was thought that maybe a few dozen people would show up. But on that sunny Sunday afternoon, several hundred showed up to celebrate this triumph over tragedy. There were speeches and toasts and reflections and testimonies. And there were a lot of really happy people present.

The Pioneer Store was back. Carol was back in business and at the helm. Everyone shared the feeling. The only thing that was different was the newness of it all. The smell of fresh paint, the brighter lights and the crispness of everything took a little getting used to.

Not long after it was back up and running, I was in there to grab a little lunch. I was in line to check out just behind Rob Bussler. He was looking up and around the room and had a pleased look on his face. I said, “What are you looking at?” He said, “Look at that,” nodding at the top of the coolers.

I hadn’t noticed it before, but Carol had put up some old milk bottles and cream pitchers and antique advertising pieces that looked like they’d probably come out of the old store. He said, “Some might call that clutter. I just call it the Pioneer Store. Now, doesn’t that feel a little better?”

And the years since then have been good years for Carol and Ellison Bay and the Pioneer store. We’ve all had ups and downs. We’ve all had a front-row seat watching Kent and Dale and Alex grow up, each becoming their own person. Bev and Jean, and of course Barb and Liz, have all stepped up and taken on their own individual roles in the operation of the Pioneer Store.

As Door County has transformed into something nearly unrecognizable from what it used to be, change has come much slower to Ellison Bay. With the Pioneer Store as this village’s lighthouse, and Carol as its quiet and steady beacon, life here is not really all that different than it used to be. More folks come here every year. And Carol has still been ever present, providing the beer and soda, the crackers and bread, showing folks what the spirit of Ellison Bay looks like, and answering that age-old question, “What do you do up here in the wintertime?”

In recent years, as Carol’s health has been in decline, we’ve all been worried about how she could go on. But go on she has. Like the Energizer Bunny banging those cymbals, or the Timex watch that just keeps on ticking, Carol just kept ’er going.

Seldom has there been a more apt partnering of person and object than Carol and her shopping cart. It became her walker, her cane, keeping her mobile and steady, while at the same time giving her a means to restock shelves so she wouldn’t waste time doing just one thing at a time.

But eventually, the bunny stopped banging the cymbal. The watch stopped ticking. Carol has left us.

And so we must gather together all the lessons we’ve learned from knowing and being around Carol all these years. So we must go forward, always forward. We must always do our best work, do the best we can to care for our community, keep the shelves stocked.

This rather small woman, at least by my standards, has left behind huge shoes to fill. Who knew Carol had such big feet?

I can’t help but feel that somewhere in a quiet, little corner of heaven, there’s a heavenly version of the Pioneer Store. I look forward to one day walking into that store. I’ll see Carol and her shopping cart stocking shelves, and I’ll make my way towards her.

“Well, you know, I’m not a beer drinker, but write down what it’s called, and leave it at the counter. I’ll see if I can get it.”

And when I leave, I can’t wait to come back because I just know that the odds are pretty good that the next time I come in, my new favorite beer will be there in the cooler.

And now, I’d like you all to join me in that little three-word prayer, originally offered by Michael Brecke all those years ago. Let us pray, “God bless Carol!” Amen.