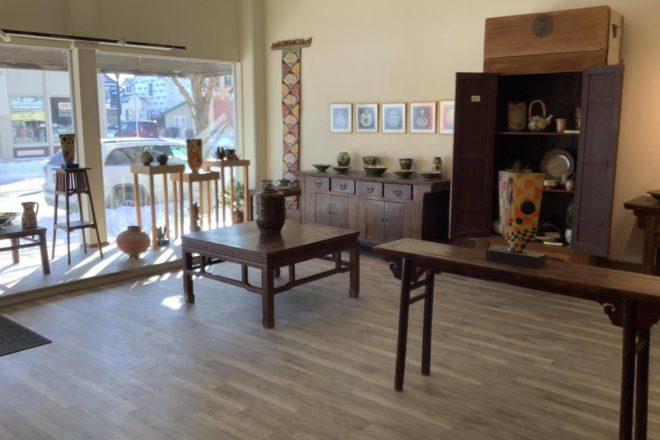 Travels to Shanghai, Singapore and Vienna during their teaching careers lend a subtle influence to the current work of Ellen Levenhagen and Mark Kolinski. Submitted.

In 1992, Mark Kolinski – who had been a special-needs teacher at Gibraltar for several years – asked then-Superintendent Bob Dahlstrom for a two-year sabbatical to teach abroad in international schools.

“I will give you the sabbatical, but you won’t be back,” Dahlstrom told him. Dahlstrom had had overseas experience himself as an administrator in the Defense Department’s school system.

With that, Kolinski and his wife, Ellen Levenhagen, were off to teach in Kuwait, then Malaysia.

As for Dahlstrom’s prediction, he was right, but off by nearly three decades. After 28 years of teaching overseas, Kolinski and Levenhagen retired to Algoma to resume managing their Clay on Steele studio and gallery there.

Both have been studio potters – think sculptures rather than coffee mugs – since they’d met in the ceramics shop at Southern Illinois University. While Kolinski taught at Gibraltar, they lived on his family’s farm north of Algoma. Levenhagen was making pottery – and milking cows – while he taught and then made pottery after school. They sold their work at art fairs, at a gallery in Chicago and at Edgewood Orchard Galleries in Fish Creek.

When they decided to teach internationally, they kept their home and returned to Wisconsin for a month or two each summer. In 2003, they opened Clay on Steele and stayed put for three years in between calls.

“When you are in international schools, you get calls,” Levenhagen said. “Some friends called and said there were openings for two teachers in Shanghai. We were, ‘OK, let’s just go.’”

During their absence, the gallery operated through an artist-in-residence program, starting with Jimmy Eddings who, with his wife, Kendra, went on to open James May Gallery next door. Keith Carter operated the gallery next, before moving to his own gallery in Kewaunee and now Green Bay. Then the Algoma Pottery Co-op kept it open and recently moved into its own space around the corner.

Kolinski and Levenhagen’s time in Shanghai was followed by teaching in Singapore and then Vienna.

Since retiring in June 2021, they have remodeled the first floor of the studio, which has eight pottery wheels for use by classes in addition to their own work area. A gallery showcases their creations and some collections of pottery from their travels.

Because Levenhagen was teaching art, they had access to ceramics studios in every posting except Vienna, where she didn’t teach. So they set up a studio in their apartment with a kiln in the bathroom.

“We were able to turn over our work and continue to develop our work,” Kolinski said.

His teaching post gave him a clean break at the end of the day to refocus his energy on clay.

She, however, often found herself using her studio time to finish demonstrations she had started in class so she could show the next phase of a work in progress to her students the next day.

“I can’t wait to work again with my own ideas,” Levenhagen said.

They drew inspiration from the work they saw during their travels: Chinese scrolls, Indonesian batik, Japanese calligraphy, and paintings by Gustav Klimt in Vienna and work by Albrecht Dürer. They kept notebooks and recorded the visual impressions of everything from fabrics to French cave paintings.

“I like to take it and co-opt it into my work,” Kolinski said.

But the influence is subtle.

“You wouldn’t look at our work and say it looks Asian,” he said. “You’re traveling, and you’re picking up ideas all the time. When you’re living overseas, everything you see is through a really fresh lens.”

“Japan was the most culturally significant because it’s First World and beyond,” Levenhagen added. “It has its very own culture, and is not American, and we’re artists and potters, and that’s what it’s all about in Japan. Even when we lived in Singapore, we took students on school trips back to Japan to make pottery. There’s such a high level of appreciation for ceramics in Japan.

“The Japanese pots are some of the first ever found, but then the Chinese say, ‘It’s us; we are the first.’ And there is also a vibrant modern pottery movement.”

Algoma is quite a contrast to Shanghai or Tokyo, but the couple is pleased with their 70-acre farm about 10 miles north of town.

“It’s absolutely delightful,” Kolinski said – and quite a contrast to the big cities, which had little nature and no opportunity for gardening.