Door County’s Sugar Creek Park, located in the Town of Gardner, has a special secret you deserve to know about:  its disc golf course.

“It’s really a nice addition to the park,” says Erik Aleson, Door County Parks & Airport Director. “There was an undeveloped portion of the woods that was left in its natural state and now this course has been bringing new visitors into the park, and it’s made a different focus of outdoor recreation available.” 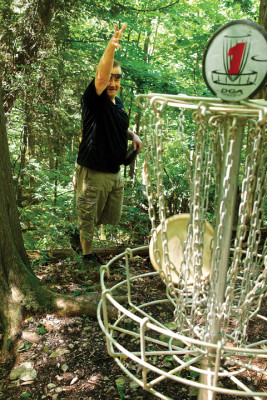 The course was constructed in the summer of 2012. Since it opened, it has attracted a large influx of visitors to a previously dormant neck of the woods. Hardcore disc golfers who want to experience the heightened challenge of playing in the thick forestry as well as nature lovers who want an excuse to peruse the park, flock to its course.

“It’s a fairly challenging course compared to others,” says Aleson. “Because of all the trees and obstacles in the woods that the visitors have to throw their discs around.”

Before the course’s construction, the woods of Sugar Creek County Park were largely untouched by park visitors. Now, with the new developments to the woods, anyone can come experience what Sugar Creek has to offer.

“The woods were so thick, some of it hadn’t been touched since the ’70s,” says Tim Hildebrand, the course designer who led a team of volunteers to build it. “You couldn’t even walk through the woods. Now, there’s about 1.4 miles of walking trails.”

While the course remains a popular summer attraction, residents and tourists alike have been known to frequent the park during some of Wisconsin’s coldest days.

“You can go out on nice days,” says Aleson. “Not just in the summer or the fall, but throughout the winter, sometimes people are out there throwing around their discs when there’s snow on the ground.”

Regardless of when the park’s visitors frequent the course, the course not only continues to bring new visitors, but reclaim players who have already experienced it. In its two years of existence, reputation for the course’s difficulty, as well as the stunning nature surrounding it, have won over many.

“It was, as I recall, a very secluded course, but also beautiful,” says Jon Jarosh, Director of Communications & Public Relations for the Door County Visitor Bureau. “It is certainly a heavily wooded course, which added to the challenge as a disc golfer, but it was great. We’re really lucky to have that course up here in Door County.”

Though its difficult reputation precedes it, visitors of all strokes can enjoy the game.

“A lot of people might be intimidated when they hear the word ‘golf,’” says Aleson. “They might think that they have to have a lot of experience to give it a try. It’s definitely a nice sport for people of all ages.”

It just goes to show that Door County always has something to offer anyone, be they tourists from out of state, or casual players who are in town for holidays. In any case, the course is responsible for a previously unmatched enthusiasm for the park.

“It’s nice to see people using the park,” says Hildebrand. “When I came to Door County, it was kind of an empty park. I never saw anybody there, except during ice fishing season.”

But really the best is yet to come, although the course is a tough act to follow. New additions are coming this summer, including a new bridge that would allow for efficient access to the course and new bathroom facilities. But perhaps the best part about Sugar Creek’s course is that it is completely free.

“We don’t charge for park entrance, or for the course or anything,” says Aleson.

Given the popularity and appeal of the course, the flow of players through it remains relaxed, allowing for quiet summer afternoons and uninterrupted games.

“It’s a nice course to bring a grill, spend the day, play a couple rounds – it’s really a gem,” says Hildebrand. “I enjoy the secluded feeling. You feel like you’re in the wilderness.”