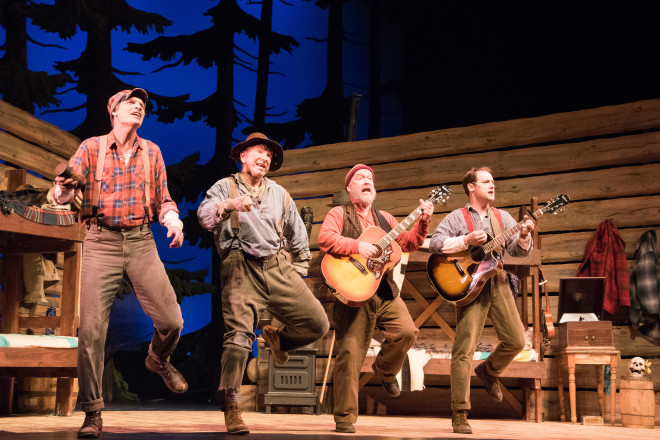 Northern Sky Theater is built on the concept of great shows under the great Northern sky, but for the 2015 fall season, the theater will bring the great outdoors indoors for its production of Lumberjacks in Love, now showing at Door Community Auditorium (DCA).

Since its debut in 1996, Lumberjacks in Love has become one of Northern Sky’s all-time box office hits and is considered one of the earliest and most successful collaborations between James Kaplan and the late Fred Alley. 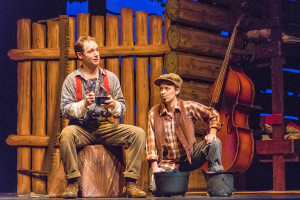 Set in a Northern Wisconsin lumber camp, Lumberjacks in Love finds four burly lumberjacks (Chase Stoeger as Moonlight, Doug Mancheski as Dirty Bob, Jeffrey Herbst as Slim, and Craig McClelland as Muskrat) enjoying the freedoms that the absence of women seems to provide: once-a-month baths, heavy drinking, romping around in long johns and wool socks, spitting where they wish, and scratching where they itch.

But when the arrival of a mail-order bride (Molly Rhode as Rosemary) threatens their way of life (and another character, The Kid played by Eva Nimmer, is revealed to actually be a woman posing as a man) hilarity and several musical numbers ensue.

An instrumental lineup of banjo, upright bass, guitar and a washboard played with a wooden spoon lend to the warmth of the upbeat, folksy bluegrass tunes that help tell the story: “Someday I Will Be Clean,” “Buncha Naked Lumberjacks,” and “Stupid, Stupid Love,” among them.

Herbst, who also directs the show, credits a number of aspects for the show’s continued success during the past nearly two decades: lyricist Fred Alley’s application of Shakespearean elements (namely mistaken identities and cross-dressing) to the show, the performance of musical numbers by the actors, and the return of actors to roles the audience has fallen in love with time and time again. 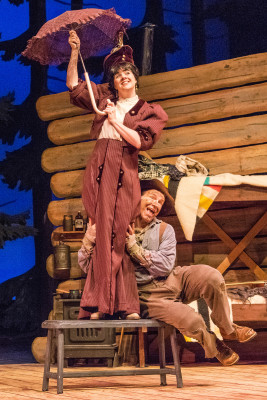 “There’s no denying that Dough Mancheski doing Dirty Bob is an iconic Northern Sky performance, and there are a lot of people who come into our office saying, ‘When are you doing Lumberjacks again? We can’t wait to see Doug do Dirty Bob,’” Herbst said. “It’s a help to have people who are identified with the roles come back and play them time and time again. At the same time, I think it’s fun for people who have seen the show before to see people take on new roles too.”

Herbst is referring to newcomer Craig McClelland, who has accompanied many Northern Sky performances as a string musician, and Eva Nimmer, a veteran performer assuming the role of The Kid.

This is also the first time the production has been performed indoors during the fall season, which provided the unique challenge of creating a set design that mimicked that of the outdoor amphitheater in Peninsula State Park.

“That natural setting and that particular stage really suit the show and you don’t have to do much. But when you bring it indoors and you’re in the DCA and suddenly you’re in a big, black hole, you’ve got to create something,” Herbst said.

Despite the move indoors, the fall timing of Lumberjacks in Love is still a good excuse for audience members to don their best and warmest flannel and blaze orange for this must-see musical.