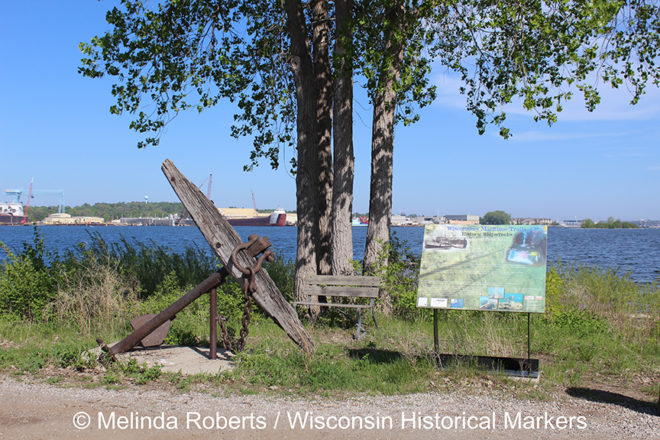 When it came time to distract herself from a bleak future, one Wisconsin transplant decided to turn to the past. In the process, she has brought the state’s rich cultural heritage to the masses through a solo journey that has revealed her own Midwestern roots.

California native Melinda Roberts was only in Wisconsin for a few months when she was diagnosed with stage-three colon cancer in November of 2011. Her prognosis was two years and came with this simple instruction from her doctor: do something fun. Six months later, she planned a trip to visit the Man Mound effigy mound in Baraboo and encountered a number of state historical markers along the way.

The encounters piqued her interest. When she returned home, she researched and discovered an official list of 532 Wisconsin Historical Markers, a marker program administered by the Wisconsin Historical Society that tells “the stories about events, individuals, buildings, or sites of local, state or national significance that contribute to our state’s rich historical heritage.”

With 18 months left in her two-year window, Roberts set out to visit and photograph all 532 of them. 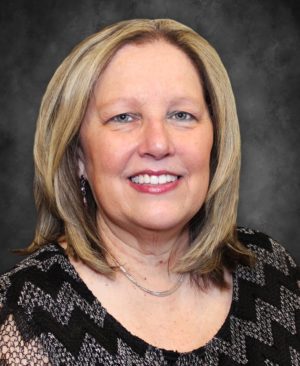 “I didn’t have any destinations in Wisconsin because I’m here by myself but at least this way I had somewhere to go,” Roberts said. “It took me 60 to 80 hours to organize the list by county then I had to get on Google maps because I didn’t know where anything was. I would map it out on Google maps in a logical order and then I’d just go out there and visit every marker. Then I got the idea to put it online. Once I finished that project ahead of schedule, I just kept going because I was getting a lot of visits to my website and people were interested. I went back and did the state a second time.”

During her travels, Roberts discovered dozens of other markers that had been placed throughout the state by various county historical societies and individuals, inspiring her to expand her scope beyond just state historical markers.

“Only 10 percent of what’s on my website is an official marker of the state historical society so what I discovered was…several counties have their own very expensive marker programs and then there are markers that have been placed by individuals,” Roberts said. “There was a guy out along the Mississippi River that marked all the spots of the Blackhawk War. Some of those are simultaneously marked with state historical society markers but he had placed those in the ‘30s.

“Door County Historical Society was placing lots of markers in the 1930s and these were all before the state historical society placed its very first marker at the Peshtigo Fire cemetery in 1953. You had a lot of people putting up markers before that and I started doing research and I started writing for the Brown County Historical Society and it just started burgeoning. I’m a teacher and I love digging things out so I just kept going.”

Four years after her journey officially began, Roberts is cancer-free and has been the subject of countless news articles and television specials, including features on Wisconsin Public Radio and Wisconsin Public Television’s Wisconsin Life.

On Aug. 4, she will present “Maritime Markers of Door County” as part of Gibraltar Historical Society’s “Gibraltar Talks” series. For this project, Roberts tracked the historical markers of the Wisconsin Maritime Trails, a collaborative project between the Wisconsin Historical Society and University of Wisconsin Sea Grant Institute that documents, preserves and protects the state’s maritime archaeological sites. 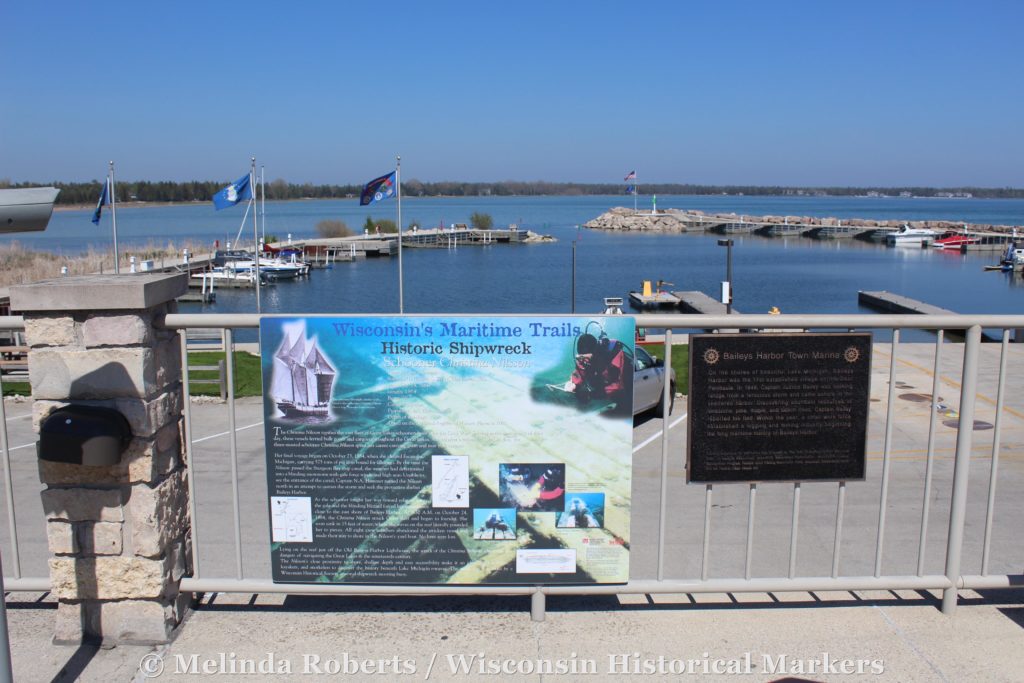 Wisconsin’s Maritime Trails marker for the historic shipwreck of the schooner Christina Nilsson.

“Door County has the highest number of markers in that series and that includes one of the state historical society official markers so it makes 14 markers on the maritime trail in Door County,” Roberts said. “I’m going to be talking about those markers and a little bit of the story behind them.”

“It’s not just the shipwrecks, they also tell the history of maritime history in Door County,” she said of the maritime trail markers. “One of them is at the Anderson Dock and it tells the story of ‘Boat Day Tuesday’ when steamer Carolina would come up from Chicago with all these tourists who wanted to escape the heat and they would arrive at noon, and not only did the Carolina have the tourists but they also had goods and wares for the residents of Ephraim…tourism had already started quite a few years before the steamer was coming from Chicago. The residents of Ephraim were letting people stay in their homes and then they started expanding their homes and pretty soon the hotels started going up. The history of Ephraim as a tourist destination and a dock for them to disembark into Door County goes back to the 1890s.”

Roberts will also share the history of French explorer Robert de La Salle, for whom Algoma’s Robert La Salle County Park is named, and his journey with Le Griffon, the 17th century sailing ship that vanished on its return trip from Green Bay.

And while Roberts is “enjoying the journey and the history” of her relatively new state of Wisconsin with its residents, she has also discovered a unique link she wasn’t aware she had with the state. Her great-grandmother Annetta Johnson was a pioneer immigrant from Norway to Wautoma, Wisconsin and Annetta happened to have a brother – that Norwegian historian and author known as Door County’s “original historian,” Hjalmar Rued Holand, who continues to inspire Roberts on her journey.

“A part of me feels like he’s there, that my grandmother’s there,” she said. “There’s been too much serendipity on this journey…I kept going because of his history here in Wisconsin.”