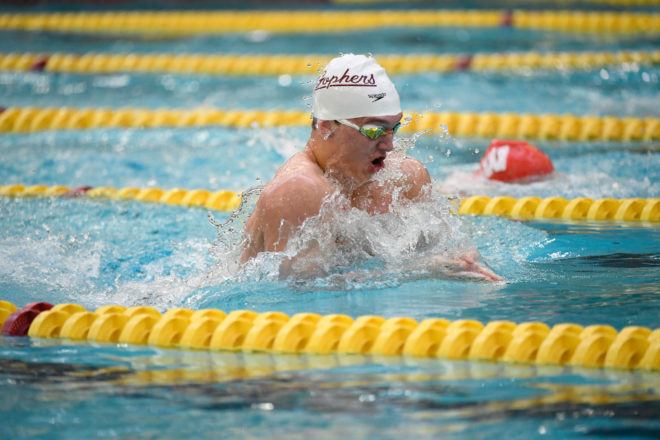 The Sevastopol graduate defended his title in the 100 breaststroke with the second fastest time ever recorded by an NCAA swimmer. McHugh, who swims for the University of Minnesota, swam a 49.40 to earn his third national championship overall.

“It’s huge,” McHugh said after the race. “It’s what I strive for all year. This is the pinnacle of NCAA swimming. I didn’t shave and taper until this meet, so this is everything for me. This is the meet of the year. I had a plan, and I executed it pretty well.”

His father and high school coach Mike McHugh said it was great to see his son’s hard work pay off.

“He has worked so immensely hard to get here and keep going,” the elder McHugh said.

McHugh followed the performance with a second-place finish in the 200 breaststroke Saturday. For McHugh the performance at the NCAAs was another step in a remarkable recovery from an event that could have ended his career. Three years ago he was hit by a stray bullet in a drive-by shooting in Minneapolis, and the bullet went through his knee and his quad. It took a year for McHugh to recover, but once he returned to competition he put a stranglehold on the 100 breaststroke, and creeped closer to his goal of breaking Ian Finnerty’s record of 49.69.

“My plan was to try to get under 50, and obviously go after that record this year,” McHugh said. “Hopefully next year. We’ll see.”