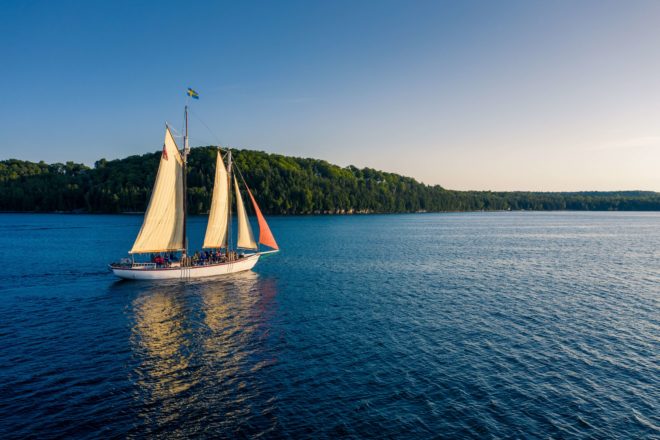 Looking out over Sister Bay from the deck of the 18th-century-inspired tall ship the Edith M. Becker, it’s easy to forget that you’re in the 21st century. Craning your neck, you follow the canvas sails as the crew raises them by hand and they unfurl at the top of the schooner’s two masts. Winding lines of rope loop in and out of view. Wood creaks as the deck gently slants and the 65-foot schooner slowly turns, gliding smoothly through the water. Once you’re away from the marina, there’s no motor noise to distract from the sound of rippling canvas, the swaying of the boom and the swelling waves. Then, near the conclusion of your trip, a cannon fires from the deck.

Captain Peder Nelson, the boat’s owner, said the cannon came with the boat.

“Historically, ships of war would discharge all their guns at once to let everyone know that they came in peace,” he said. “We do it as a salute to every trip.”

The Edith M. Becker is stuffed with lived history. Herb and Doris Smith, authors of Sailing Three Oceans, built the ship by hand in the early 1980s, then sailed it around the world — twice. The Smiths christened the schooner the Appledore III, and its deck was hand-caulked by Doris — who was about eight months pregnant at the time — while her husband was away shooting film for Walt Disney.

When Herb returned in the spring of 1984, the Smiths packed up their then-eight-year-old son and a few paying passengers and set out to circumnavigate the globe. Doris gave birth to a baby daughter en route, taking only a few weeks to convalesce before setting sail again, this time with an infant aboard. After the voyage, the Smiths continued building ships. (There are five Appledores in all.) Eventually the Appledore III took on a new name under the new owner, Peder Nelson.

Nelson had previous sailing experience aboard the Appledore II, III and V, as well as the 118-foot Spirit of Dana Point. Work took Nelson all over the world, but he always kept the idea of returning to Door County in the back of his mind. After interning with Peterson Builders in Sturgeon Bay; moving to Washington, D.C., to work as a technical writer; volunteering with the Peace Corps; and teaching for 11 years in Chicago public schools, Nelson made his decision: “I’m burned out. I’m just going to go for it.”

And with that, he purchased the Appledore III in 2011, renamed it the Edith M. Becker after his great-grandmother, and started chartering the vessel out of Sister Bay in 2012. With the new name, it carried additional history: the story of a German immigrant and eventual lifelong Door County resident, Edith Becker.

During the 1880s, then-six-year-old Edith (Jischke) Becker arrived in New York City from Germany aboard a schooner that was about 30 feet longer than the one that now bears her name. Although passages from Europe to America were notoriously unpleasant at the time, she always remembered that she danced so much during the voyage that she wore out her shoes. (Either the passage was an unusually pleasant one, or young Edith had a talent for remembering the best of a situation.)

After she and her family arrived in New York, they ventured toward Baileys Harbor before eventually settling in Sister Bay. That’s where Nelson remembers visiting his great-grandmother when he was a boy and she was in her 90s.

“Moving a schooner back here and naming it after her was to memorialize her,” said Nelson.

Sailing past the natural landscapes of Door County, you also witness evidence of history that stretches back 15,000 years, when a giant glacier covered Wisconsin. As it retreated, the glacier left behind the dramatic bluff landscapes of the Niagara Escarpment, which stretch along the peninsula, and the escarpment contributes to unpredictable wind effects on the surrounding waters.

“It’s a hot rock, so the air rises from it,” Nelson explained. “Sailing in Door County makes you a good sailor because you have to adjust constantly.”

But don’t worry: you’re in the hands of a capable and experienced crew on every sail.

As it was in the past, passengers today have many memorable experiences aboard the Edith M. Becker. The appeals of the vessel are its promise of incredible views and the allure of the schooner itself, but it also offers passengers an unusual place to relax.

“Being out on the water, in the quiet, it’s like a mental massage,” Nelson said. “You get to unplug. The engine is off virtually every sail.”

Even when the wind dies unexpectedly and the engine must be engaged, the experience is still soothing.

“[One trip], I remember having to motor and feeling bad that it wasn’t turning out to be a great sail for the family on board,” Nelson recalled. “But the father looked at the water with his eyes welling up and said, ‘This is a slice of heaven. I haven’t felt this much peace in years.’”

Although the phrase “slice of heaven” might sound overboard at first reading, being on the water offers a kind of ethereality that’s not accessible in the same way on land. What evokes this feeling especially is watching the evolving sunset from the water: The sky lights up in brilliant shades of neon-orange and red while fluffy clouds stretch above the bluffs like cotton candy. You feel as if you just might be getting a peek into heaven after all.

In an almost jarring re-entry into the present day, you might not be able to resist pulling out your phone to snap a few pictures. But just a warning: Pictures will never do the vistas true justice. Viewing them is an experience that’s best left unplugged: fully present in the moment.