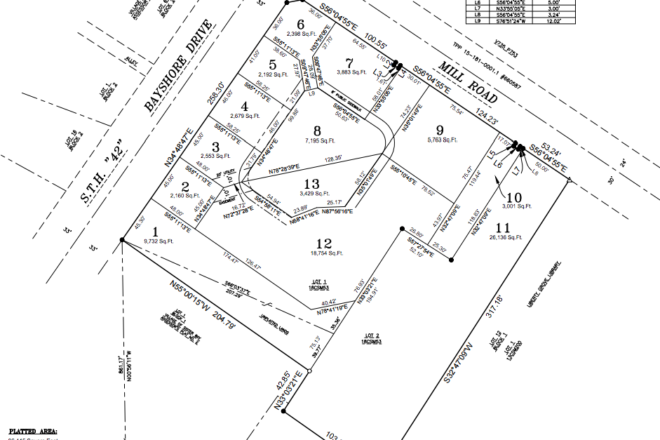 The accepted plat of the Braun Property approved by the village board.

At its April 19 meeting, the Sister Bay Village board approved the Planned Unit Development (PUD) for the Braun property in downtown Sister Bay. The approved map, or plat, closely resembles the plan put forth by the public during a workshop in January, which includes retail along Bay Shore Drive and Mill Road, a central green space and a larger development such as a hotel along the southeast corner of the property.

“In anticipation of all of the contingencies that might be, I’m sure there’s some out there that we haven’t thought of, but we’ve done everything we can in our professional capacity to create a lot that will allow the development based on the concept drawing,” said Village Administrator Zeke Jackson. 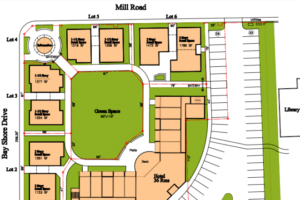 The original plan developed after taking ideas from the public in January.

Jackson worked with the public works staff, potential developers and the engineering firm Robert E. Lee & Associates to consider lot sizes and utility hookups while leaving room for the flexibility of development. A PUD allows for mixed zoning uses and gives the village more control on preserving public spaces.

Jackson said there’s already interest in several of the lots, but the village has not yet determined purchase prices for the properties.

The current plan includes an information booth on the corner of Bay Shore Drive and Mill Road. There will be five retail lots along Bay Shore Drive and one or two retail lots along Mill Road, depending on the plans for what will likely be a hotel on the property. The village divided the property up specifically to accommodate these unknowns in development.

“I’m going to describe them as the hotel in a ‘cornfield in Iowa’ type of developer,” said Jackson of the developers interested in putting a hotel on the property. One potential developer is GrandStay Hospitality LLC, which has locations across Wisconsin and the Midwest, and another developer Jackson did not name. “They have a stock design plan that largely is a big rectangle. You have seen these on interstates all over the country.”

These design plans have already been approved by the state for mechanical structure and have been field tested for operational and financial viability.

“What those developers want is a longer lot that facilitates that site development,” said Jackson. If the village moves forward with this kind of hotel development, they will likely return to the plat and, through a certified survey map (CSM), combine the adjacent lots 12 and nine. The village can use the same CSM process if a retail developer wants to combine two of the smaller lots along Bay Shore Drive.

The development also included a quitclaim deed from Rita Willems, owner of the Sister Bay Bowl property and the house immediately south of the Braun property, to transfer a 4,070 square foot sliver of land to the village to be used as parking or a driveway around the developed property.

“In return we will need to address any grading issue, stormwater issues or parking issues that come as a result of that parking plat that we have tentatively developed in tying [in] the Bowl parking lot,” said Jackson.

With an approved legal plat of the property, the village will now decide what to sell each lot for. In conversation with potential developers of the smaller retail lots, Jackson has used the number $85,000 as a starting point, but that number is unofficial and is just used, “as a conversation starter.”

In the board report given to board members before the meeting, Jackson foresees a potential assessed value of $8 million for the property, yielding around $100,000 in tax value within the Tax Increment Financing District (TIF).

To see the approved plat and the original concept design, visit doorcountypulse.com.