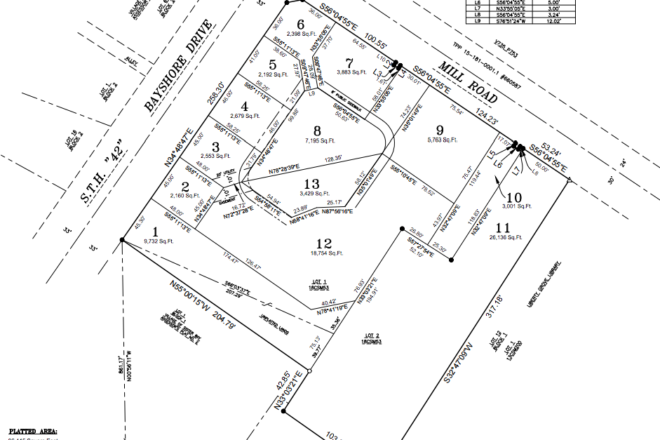 The village is entertaining an offer on lots 2, 3, 4, 5, 9 and 12. Chop is located on lot 7 and lots 8 and 13 will be retained as public space with possible variations depending on the upcoming development.

After public visioning sessions, lot line changes and many individual offers on the Braun property in downtown Sister Bay, the village may soon get what it was hoping for when it originally began planning for the property in 2013: a single developer to purchase and build on the lots.

“The single offer will be for… everything up for sale,” said Zeke Jackson, village administrator, in an interview before the board entertained an offer on the property during closed session Sept. 19.

The board has not yet accepted an offer on the property, but Jackson said there is substantial agreement between the parties and he expects the sale to be concluded soon.

The village is planning to retain the center of the property for public use, but the surrounding development may rearrange those lot lines. The immediate corner of Bay Shore Drive and Mill Road will be an information kiosk.

Two of the lots on the Braun property were purchased by JJ Johnson, but the village recouped them after Johnson did not begin development after Labor Day of this year as promised.

The development will likely be phased over several years.

As long as developers follow through on their plans and they are met with village approval, here’s what else to expect to see in Sister Bay over the next year:

Keith Garot has defaulted on his development agreement with the village again when he did not have landscaping and an asphalted road down by Aug. 31. Jackson sent Garot an amended development agreement by certified mail, which contained minimum assessed value payments of $12,500, but Garot has not signed and returned it. There are currently two apartment buildings being built on the property.

“[The village] may not allow him to do anything else,” said Jackson. “He may be forced into a position to sell stuff off.”

The village may begin foreclosure proceedings at the end of this year if the landscaping and new road is not complete, but Jackson prefers to work with Garot if he does appear to be making progress.

“If we go to foreclose it’s going to take us forever to take care of on the back end,” said Jackson. “It comes under us and we get into public bidding requirements to get things done which drives project costs up and makes it unaffordable.”

The village will not release occupancy permits to Garot for the two apartment buildings underway until the landscaping and new road are in place. Any future development at the property will be at the discretion of the village.