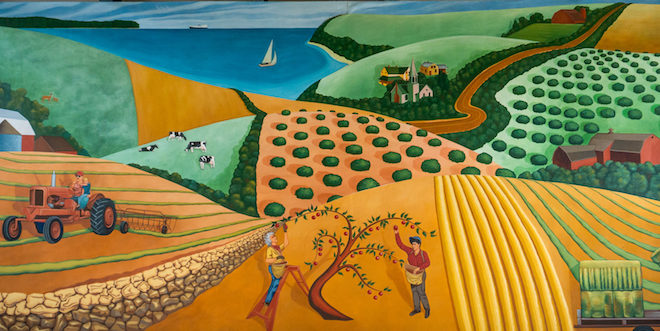 On the wall opposite “Door County/The Water” at Door Community Auditorium is David Giffey’s “Door County/The Land.” Commissioned in the early 1990s to create both pieces, he strived to capture the essence of those who call Door County home year-round. “Water” depicts commercial fishers and shipbuilders; “Land” portrays fruit pickers and farmers. Photo by Rachel Lukas.

With the recent sale of the Nelson’s building in Baileys Harbor, there’s a lot of community buzz around the question, “What will happen to the mural?”

Created in 2013 through a collaboration of local poet Nancy Rafal and the Baileys Harbor community, and brought to life by muralist Ram Rojas, the mural features historically and locally significant focal points and figures, including The Ridges Sanctuary’s Lower Range Light, environmentalist Emma Toft and the Brann Bros. Store, which originally stood on the site of Nelson’s Shopping Center. Inscribed on the 96-foot-by-22-foot mural, painted on removable panels, are verses from the late poet Lorine Niedecker’s “Wintergreen Ridge,” inspired by her visit to The Ridges Sanctuary during the 1960s.

Although the fate of the mural in Baileys Harbor is still uncertain, it is one illustration of how these larger-than-life works of art weave themselves into a community’s legacy, even after only a short time.

“I’m sort of like a historian,” Rojas said of his work and the process behind it. “I learn so much about the communities that I am working in. [The process] is part historical research, part anthropological work, part storyteller.”

At The Clearing in Ellison Bay, Rojas painted the history and community significance of the year-round folk school on five massive walls that surround the balcony space in the Jens Jensen Visitor Center, each wall depicting a specific person or piece of the surrounding landscape.

And located in between his works in Baileys Harbor and Ellison Bay in Fish Creek, the Door County-based artist created a Michelangelo-esque cloud mural above the Link Gallery of Children’s Art within the Door Community Auditorium. Each painting differs from the others, but all raise similar questions from observers.

“‘What’s the process like? Where do you start?’ So often I am asked that, and the truth is, I haven’t really thought of it. Every single one is different,” Rojas said.

There is one similarity among his works, however. Although most projects begin with a general direction from a client – a community, corporation or individual – every mural starts with a sketch drawn to scale that is then transferred to the final surface. In between the sketch and the final unveiling, the timeline is fluid. Some works take several weeks, others a few years.

Claire Erickson takes a more intuitive approach to her murals and attempts to create “in the moment.”

“I tend to knock murals out in under a week,” she said, adding that she’s a little embarrassed to admit that to people. “I just get motivated, and I’m there until it’s done.”

Developing the design might take longer, but once it’s set, the process of actually painting the mural is a more intuitive, in-the-moment activity.

“I can’t really describe it, but the minute someone comes to me and says, ‘I want you to paint a mural for me,’ it’s like I can instantly get a picture in my mind,” she said. “And from there, I just have to paint it.”

In some ways, the jump from painting canvases to painting murals was a substantial creative leap for Erickson, who added murals to her portfolio two years ago. From the work environment, to the type of paint she used, to the method, to the message, everything about the work felt different initially.

“I paint portraits for a living, so that is all about realism and layers and painting for a likeness,” she said. “But with murals, it is more of an illustrative style.”

Her process also involves incorporating technology with fine art, designing on a tablet first so she can fine-tune the details, and then projecting the image onto the final surface.

“It’s funny, because when I think of other muralists like Ram [Rojas], I tend to think he has always had his style,” Erickson said. “But something he’s told me, and something I need to remember, is that he has created that style over time.”

Erickson’s style translates well for her clients, which are mostly local business owners, a clientele that more or less found her.

One of her first murals was for Jackalope Trading Co. in Baileys Harbor, which launched a following of other local businesses asking to have murals painted at their buildings, including Door County Surf and Supply in Baileys Harbor, Blossoms Flower House in Sister Bay and Door Disc Golf in Fish Creek. Her most recent project, still in the works, is a mural inside an old bank safe at Lawlss Coffee in Sturgeon Bay.

“It’s really a breath of fresh air and nice change of pace,” Erickson said about the transition from her usual social-justice-driven portraits and paintings to business murals. “There is a challenge in deciding what to paint that is timeless versus trendy, and what I would like to see not only as a customer, but as the person who created this business.”

Building Door County’s Community One Tile at a Time

Some may think that being told what to create would feel constricting. Instead, many muralists find that part of the process to evoke even greater creativity and ideas that they never would have envisioned solo.

“We never could have done something as imaginative by ourselves,” said Jeanne Aurelius of Clay Bay Pottery in Ellison Bay who, along with husband David, has created 21 murals throughout the state, including one inside every grade school in Door County. “We felt so much freer using [the students’] ideas and that imagination, to think like a child, instead of saying, ‘This is how it should be, and this is what we are going to create.’”

Unlike those that Rojas and Erickson create, the Aureliuses’ murals use ceramic tiles. But the process of moving from idea to installation follows a similar path.

“Every mural started with a theme from the school,” Jeanne Aurelius said.

From there, the couple and the students went on “vision quests” connected to the theme, gathering ideas and inspiration that the students then put down on paper. Those drawings were then reviewed and turned into six-by-six-inch tiles that were glazed and fired before being permanently installed. Completed works are typically six to seven feet tall and 12 to 14 feet wide.

“The actual design of the mural would come about by looking at the tiles,” Aurelius said. “Certain drawings you would see, and you instantly knew you needed to enlarge it into several individual tiles.”

For example, the mural they helped create at Gibraltar Grade School, titled “Visions of Peace,” features a central, larger image of three children playing together, which was created by combining several smaller tiles. Around them, creating the rest of the design, are several smaller tiles, each depicting students’ different interpretations of the mural’s theme of peace.

In addition to the creative process, the Aureliuses were also teaching these young citizens about community.

“We wanted the kids to know that these weren’t just their drawings, but that this was their gift to the community,” Aurelius said.

Honoring the Past and the Present

That is also how artist Rebecca Carlton of Juddville Clay views the mural work she has been commissioned to do throughout Door County. In addition to documenting an area’s historical roots, murals provide the opportunity to cultivate community.

One of her most recent installations is the donor wall at the new Pete and Jelaine Horton Center Skilled Nursing Facility at Door County Medical Center. Several members of the administrative team approached Carlton to create the piece. From their ideas, she set to work translating them to tiles.

“I wanted the images to capture the life the residents living there are still living,” she said.

In addition to visually honoring donors who helped make the facility possible, Carlton also wants residents to be able to interact with the finished piece. Highly textured tiles mingle with movement created from the placement of the tiles. The scene has a nature theme, including pine trees, turtles, frogs and wildflowers, including a patch of forget-me-nots – a subtle nod to the residents and their legacies.

Carlton is no stranger to creating commissioned pieces, but the ones she has created that have taken on a life within a community hold special meaning for her.

“It’s about telling the stories and capturing the things we don’t see at first glance,” she said. “They help us to remember where we come from.”