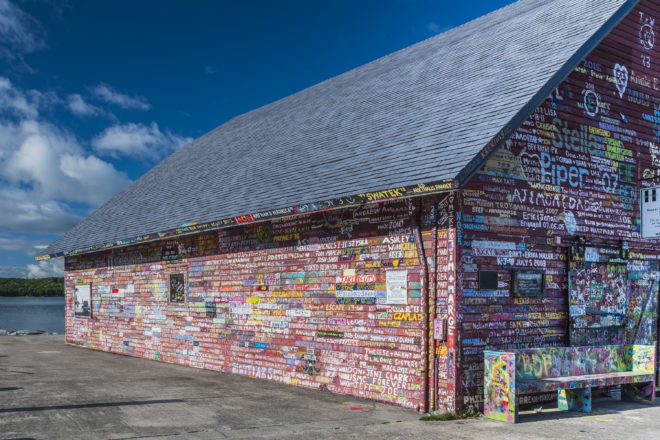 You’ve probably seen the colorful exterior walls of Ephraim’s Hardy Gallery — and maybe you’ve even contributed a graffito of your own — but have you ever wondered how the wall-writing tradition began? The gallery doesn’t encourage writing on its walls merely as a gimmick. Rather, the graffiti tradition at Anderson Dock is an embodiment of Ephraim’s history.

After Norwegian brothers Aslag and Halvor Anderson recognized the need for a deepwater dock in Ephraim, they constructed one in 1858. Throughout the 1880s, steamers arriving at the dock — most notably from the Goodrich Transportation Company — brought much-needed goods and much-appreciated tourists, and this activity ultimately vitalized Ephraim. Although the dock’s warehouse — the present-day Hardy Gallery — was built to store merchandise, it became a visible reminder of the sailors and ships that had stopped there.

Emily Irwin, outreach director and curator for the Ephraim Historical Foundation, explained that sailors arriving in Ephraim painted the name of their ship and the date on the side of the building as a way to mark their visit.

It’s a bit of a mystery exactly when the graffiti tradition began, but sailors were known to write on the warehouse from around 1910 into the 1950s, perhaps to express their relief and gratitude for a safe passage through the notorious Death’s Door waters, or simply to commemorate their arrival in Ephraim.

When the Goodrich Transportation Company went bankrupt in the 1930s, the warehouse began to shift from storing merchandise to serving as a gathering space that accommodated a winter basketball court, a silent-movie house and a yacht club at different times throughout the years. However, Judy Cloninger, Aslag Anderson’s great-granddaughter, remembers a very special group of sailors who signed the warehouse’s clapboard siding during that era.

“In my childhood,” she said, “we had a boat called Fun Time, and we wrote the name of the boat and the years we had it on the warehouse.”

In 1949, the Ephraim Historical Foundation purchased the dock and warehouse from the Anderson family, and in 1961, the foundation leased the building to the Hardy Gallery. Through these shifts, however, the graffiti tradition has remained intact, with the public picking up where the sailors left off.

“The dock and what it represents is in my blood,” Cloninger said. “It has always been a part of my life.”

Undoubtedly, the dock has special personal significance for the Anderson family, but it’s also an iconic location known by visitors from all over the world. Just as in its early days of receiving sailors, visitors today continue to commemorate their arrival with colorful graffiti. Today’s visitors presumably haven’t braved dangerous waters to reach Ephraim, but they’re still invited to record their names on the Hardy Gallery’s exterior walls, thereby participating in the dock’s rich history of welcoming travelers to Ephraim.