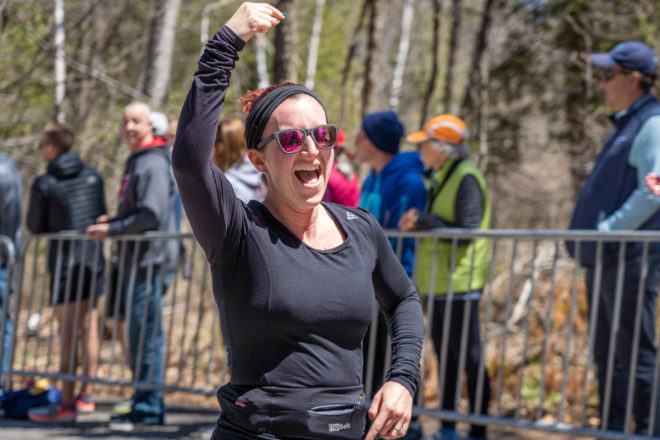 For 13 of the 14 editions of the Door County Half Marathon, I have stood at the finish line and cheered for as many of the finishers as I could. I’ve heard many inspiring stories in my role as course director, but as we look ahead to edition 15 of the race on May 6, 2023, here are four stories from the finish that stand out most.

A Picture of Triumph

We started working with MyTEAMTRIUMPH – a group that helps athletes with disabilities to participate in sporting events – in 2014. Among that first group of inspiring competitors was then-17-year-old Kayla Kudick of Southern Door, who has cerebral palsy.

She completed most of the race in a specialized wheelchair, but she stopped about 100 feet short of the finish. When I saw her rise from her chair, I felt chills ripple through my body. She has participated in every race since, and I still get chills each time she finishes.

Jake Nyberg is a lot of things, but a runner isn’t the first thing you’d call him. So when he finished the race in 2012 with his friend Erik Molin and celebrated with a race-weekend brunch and drinks at Alexander’s, he challenged his cousin Lukas Willems, another non-runner at the time, to match his effort the next year. Willems did, leading to another pact – signed with ink on a bar napkin – with several more friends and family members.

When Todd Strojny – then the father of a three-year-old son and settling into a new home with his wife, Stacie – found out that he had a tumor in his mouth and brain, he gave himself a challenge: “If I beat this thing, I’m going to run the Half Marathon.”

He beat it. Then he ran it. And when his long, lanky legs pounded beneath determined eyes toward the finish in 2009, his wife and son were there to greet him. He ran again in 2014 as part of the Run for a Cause program to raise money for DOOR CANcer to help others fight their battles with the disease.

I was waiting near the finish line in 2012 when a little girl named Emerson began playing with the cones at the side of the course as her mother, Hannah, looked on. Then Emerson stared down the road, looking for her aunt Hilari, who had yet to cross the finish.

Her aunt, it turned out, was the last runner in a family run of remembrance. Hilari and Hannah’s father John Bruns had introduced his kids to the park at a young age by taking them camping and hiking. Now Hilari was injured, struggling three hours and 10 minutes after she’d started.

Then Hannah, screamed, “There she is! There she is!” as she spotted Hilari on the final turn. Emerson clapped, then ran behind Hilari with her mother to the finish – a family tribute completed.

The long days of Half Marathon week are some of my favorite days of the year. It’s time spent in the park and on the trails, bringing people together. But it’s also time I know will end at that finish line, watching people complete races of their own that have nothing to do with the clock or a place on the leaderboard. Where the meaning is written on their faces.