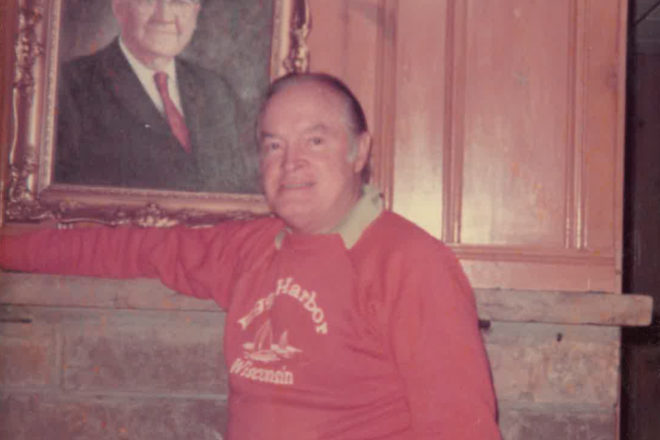 Bob Hope poses for a picture at Casey’s in September of 1971, sporting his new Egg Harbor sweater. Submitted.

But never has Door County felt the touch of fame in quite the way it did 47 years ago, when one of the most famous men in America spent a week wandering the mostly empty roads of Egg Harbor, population 184. In 1971, few names were more recognizable than that of Bob Hope, once called the most popular entertainer of the 20th century. He hosted the Academy Awards a record 19 times at a time when half the households in America tuned in to the telecast each year.

And for a week after Labor Day 1971, Hope, with his wife, Dolores; and son Kelly called Egg Harbor home. “Bob Hope Seen Here” read a headline in the Door County Advocate, noting sightings at Reimer’s Standard, Red Owl and Em’s.

Egg Harbor is a tiny village today, but back then it was even simpler, consisting of “five taverns, three gas stations, a feed mill, grocery store and a two-room schoolhouse,” as native Mike Lautenbach put it, and they were all ringed by unblemished acres of cherry orchards. Yet there was Hope, strolling through town with a golf club slung over his shoulder, stopping to talk to Elva Gilson at Gilson’s Variety Store (now Double Delights) or grab a drink at Murphy Moore’s (now Shipwrecked).

How’d he end up in Egg Harbor? The answer starts with a bit of railroad and WWII history.

Robert Cowles was president of the National Railroad Museum in Green Bay, home of the Dwight D. Eisenhower locomotive that was dedicated by the British after WWII. Hope was a friend of Eisenhower, so Cowles wanted to persuade Hope to visit the museum for a benefit. His pleas went nowhere until one day he got a call from Hope’s manager. Cowles’s son Jim recalled the conversation.

“Listen, Bob has got a whole week where he doesn’t have anything scheduled,” Hope’s manager said. “Do you have a place where you can hide him for a week, and then he’ll check out what you have going?”

The Cowles family owned Horseshoe Bay Farms and homes south of Egg Harbor, so they had plenty of room for guests after Labor Day, when Door County rolled up its carpets. Hope flew into Green Bay with Dolores and Kelly, and they drove to Egg Harbor to spend the week talking up the locals of Egg Harbor.

“The buzz was immediately running through town,” said Mary Casey Martin. “It didn’t take much in Egg Harbor.”

“I don’t know who you’d compare him to today in terms of fame,” said Martin’s sister Jane Lautenbach, who waited on Hope’s family at Casey’s Inn that week. “Maybe a Kanye West or Jimmy Fallon? I just remember everybody being really excited about him being around.”

Jim Cowles set Hope up with a charter fishing excursion with John Propsom in Baileys Harbor, and he golfed at Maxwelton Braes and Alpine. And he hit the few restaurants that were still open in a village where farm fields and silos still occupied prime real estate.

“He was exactly in person like he was on TV,” said Cowles, whose mom called him home from college at Stevens Point that week to meet Hope. “He was a character, a ham. Loved the attention. Very cordial with everybody. Downtown Egg Harbor was all lit up with camera flashes.”

Martin was a host at Casey’s Inn when Robert Cowles called for a late-Friday reservation.

“We knew the rumor that he was in town,” she recalled. “He was delightful. We roped off the dining room so they could dine in private, and of course people in the bar wanted to sneak in and get messages to him.”

“The gas stations were closed, and I got a call from Chuck Richard, who said that Bob Hope needed gas for his car,” Dannhausen said. “Well, we had a gas pump for the marine shop at Stagecoach [now Door County Nature Works], so I went over and pumped some gas. Hope gave me $5 for a couple gallons, which at that time was quite a lot of money for gas.”

And one evening when Hope ran out of frozen strawberries for his favorite drink, a strawberry daiquiri, Cowles had to use local connections to avert a crisis.

“Everything was closed at that point, so Hope’s son and I drove up to Schneider’s grocery store and knocked on the back door to the residence,” he said. “Gene Standard came out, and we told him Mr. Hope needed some frozen strawberries.”

Standard thought it was a joke, but he went into the shop anyway and got Mr. Hope his strawberries. Cocktail hour was saved.

At the end of his stay, Hope said he’d like to return to Door County. “It’s beautiful, and everyone’s been so nice,” he told the Door County Advocate, where his photo was on the front page.

A month later, Hope appeared at the benefit for the National Railroad Museum. Egg Harbor mail carrier Don Kiehnau presented him with what surely became for Hope a most cherished token of his visit: a plaque naming him the “No. 1 Honorary Citizen of the Village of Egg Harbor, Wisconsin.”