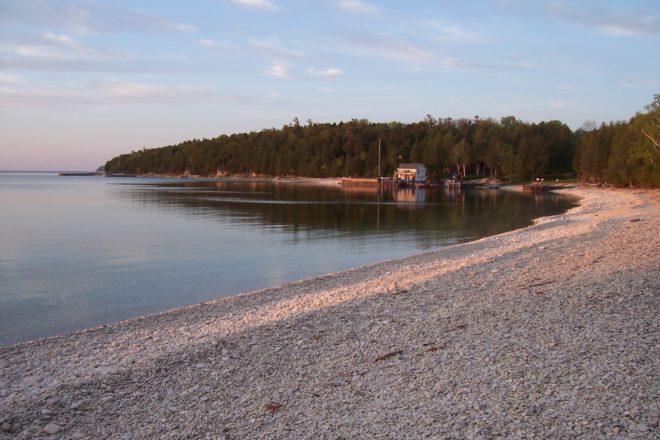 The first step toward changing the look of one of northern Door County’s most beloved places took place at the Sister Bay Plan Commission meeting Tuesday, Dec. 11.

Tom Scheuerman of NAI Pfefferle, on behalf of the Luber family, presented a preliminary concept plan that would divide the Pebble Beach shoreline into four parcels for development.

The property is zoned commercial, however, and would require approval of a zoning change to be turned into residential development. The commission tabled a decision on that change because doing so could qualify as spot zoning, since there is no Sister Bay residential zoning contiguous to the property. However, the property across the road, which is part of Liberty Grove, is zoned residential. The village will consult with its attorney for an opinion on the change.

While many beach-goers have used the beach thinking it was public, the property is owned by the Luber family and has sat undeveloped under their stewardship for generations. When the beach grew more popular 20 years ago, in part due to the opening of Fred & Fuzzy’s Waterfront Bar and Grill, litter became a major issue on the beach.

Listen: More on the future of Pebble Beach

The plan commission agreed to amend the development agreement with Sara Anderson and Nick Hofkamp for a proposed wedding venue on Fieldcrest Road. The amendment delays the requirement that the parking lot for the wedding venue be paved. Anderson asked the board to allow them to delay the $75,000 expense of paving for up to three years. Though Anderson wanted to gravel the lot instead, the village moved to keep it grass until it’s paved to avoid dust issues with neighboring property owners.

The commission finalized changes to the development agreement with Chris Schmeltz for the Dörr Hotel, slated for construction this spring next to CHOP restaurant. The changes will allow Schmeltz to add five rooms to the first floor of the building, leaving 1,200 square feet of retail space.

Schmeltz had requested the change to make the project financially viable, he said. The change does not alter the parking agreement.