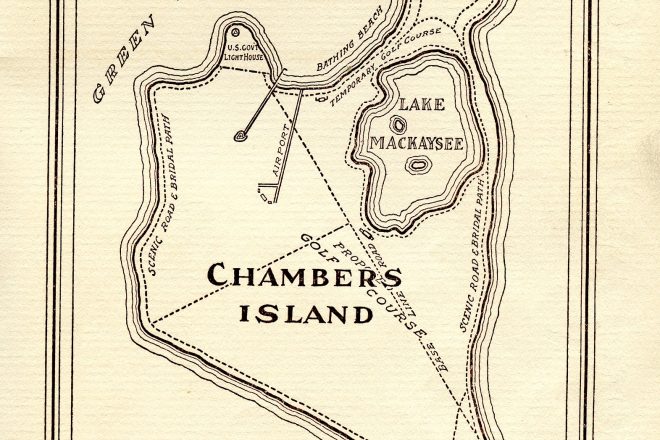 When golf courses close, as Bay Ridge in Sister Bay did in early 2020, nature often takes over, and only memories of played rounds remain. As decades pass, any signs of those tracks can disappear altogether.

That’s the case with several pieces of land in Door County, where at least three courses either never opened or entertained golfers for only a few years.

Chambers Island lighthouse keeper Mary Ann Blahnik said the family of Dick Baudhuin owned property in the center of the island, and she’s thankful that the family replanted trees more than 60 years ago on a former golf course that was constructed as part of a 1920s real-estate scheme. Blahnik said the airstrip that’s still in use on the island is the main reminder of that failed effort to turn the middle of the island into an upscale, “exclusive colony.”

Blahnik said only a few summertime islanders can point to where the course had been, with a few rusty pipes near ground level being the only remaining relics. She doesn’t know whether anyone alive remembers playing there.

“Paul Guenzel – he had golfed there with his dad. He was the only person I ever met who actually golfed there,” Blahnik said.

Stonehedge greens keeper and Baileys Harbor constable Mark Merrill said the Chambers Island course isn’t the only one that’s gone or forgotten, or was never completed. Merrill has memories of cross-country skiing – not golfing – on fairways that were cut through boreal forest during the 1970s in the middle of a controversial development on Marshall’s Point. Merrill took advantage of that skiing opportunity on that private land thanks to an invitation from his friend, the late Al Johnson, who owned an undeveloped lot there.

Architect E. Lawrence Packard created long-lasting, classic designs for familiar northeastern Wisconsin golf holes – including Brown County and Peninsula State Park’s third, fourth, 10th and 12th holes – but his Pine Ledges course on Marshall’s Point never opened. Contractors built fairways and greens, and they removed and piled up rock in the middle of Marshall’s Point, but challenges by local environmentalists and other groups, as well as the Wisconsin Department of Natural Resources (DNR), halted the plan.

Pilots still can see the layout of the fairways from the air, and Merrill knows that a local landscaper mows tall grasses and weeds about once a year.

Merrill said he’s aware of a couple of other golf developments that never got going. Merrill has been trying to find more information about a course that was once planned west of Whitefish Bay.

A quick search of the Sturgeon Bay library’s online newspaper archives shows just one reference to a Whitefish Bay course. That 1929 article – an opinion piece pushing for a course on Washington Island – mentioned the Maxwelton Braes course at Baileys Harbor and a course at Whitefish Bay both being under construction. Washington Island did not end up getting a course – Deer Run – until the late 1960s.

References to a Whitefish Bay course vanished after the Wall Street crash of 1929, so the halt to that project must have been abrupt. That wasn’t the case with the project at Marshall’s Point, however. According to library newspaper archives, the Door County Board in 1972 and 1973 almost unanimously promoted development in general, and especially the golf course, 100-room luxury lodge and five-acre residential lots. In 1973, the county board voted against the state of Wisconsin acquiring any more land in the county.

According to the Feb. 18, 1975, issue of the Door County Advocate, Liberty Grove town supervisor Harold “Wink” Larson asked the county for full support of the Marshall’s Point and Pine Ledges project, citing positive effects on the tax base and calling it the “ultimate in fine planning as a property development in northern Door County.”

Years of hearings and court cases put an end to Peter Mero’s Pine Ledges development after the DNR issued an adverse State Environmental Impact Statement and placed multiple restrictions on the development.

In 1978, Claes Nobel acquired the point from the bank and began developing shoreline lots for the exclusive, private residential area that exists today. The Wisconsin DNR again objected to that development, citing a need to protect rare plants, as well as a major whitefish spawning bed and the remaining boreal forest that had not been cut for the golf course. In 1979, the DNR, in an effort spearheaded by Clifford Messinger, failed in an initial attempt to acquire 110 acres of boreal forest on the point and to stop the residential construction.